On 12 November 2012, the Institute of Law (IoL) at Birzeit University organised in Gaza City a legal encounter on The Local Elections: Legal and Administrative Dimensions. Delivered by Advocate Amjad al Agha, Lecturer at the Islamic University of Gaza, the legal encounter brought together a large number of lawyers, representatives of human rights organisations, members of the legal community, and representatives of interested bodies.
November 20, 2012 Ordering Information

Mrs. Lina at Tounisi, Coordinator of the IoL Gaza Office, welcomed the speaker and audience and made a briefing note about the Birzeit Legal Encounters programme.

Having presented an outline of his presentation, Advocate Agha raised several questions about elections, including definition, significance, goals, importance of the election of councils of local bodies, and legal framework of the local government sector in Palestine.

Advocate Agha explained that the “election of councils of local bodies is a major component of good governance and democratic life. It is a means that enables citizens to safeguard their civil rights and freedoms.” Advocate Agha added that “elections promote public participation in decision-making processes and facilitate transition from bureaucracy, centralisation and appointment procedures to a decentralised, participatory and selective process, ensuring a more effective and efficient leadership through the ballot box. Created by absent democratic innovation, election puts an end to increasing political and social controversy and tension.

Local elections should be held in line with relevant constitutional provisions. They consolidate a binding constitutional and legal obligation which, if violated, gives rise to liability. Local elections further promote the principle of equality and equitable opportunity in terms of nomination, voting and results. “The ballot box does not discriminate between candidates, whether they are coloured, men or women.” Advocate Agha asserted. To meet development aspirations of local communities, citizens will elect candidate lists with the most distinctive programmes.

Advocate Agha elaborated on the impact of the recent local elections on the administrative framework in Palestine, stressing that a decentralised system should be recovered and maintained. Finally, Advocate Agha made relevant recommendations regarding the controversial working relationship between the Ministry of Local Government and local government units (LGUs), characteristics of the Palestinian local government sector, problems encountered by LGUs, and reflections of local elections on the development role of municipal councils.

In the ensuing discussion, the audience made significant interventions and raised questions that reflected an utmost interest and interaction with the topic. On behalf of the IoL, Mrs. Tounisi thanked the audience for their active participation in the legal encounter.

The legal encounter was organised in partnership with the Konrad Adenauer Stiftung. 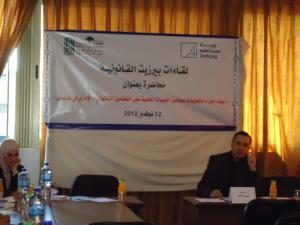 Agha at the Legal Encounter on the 12 November 2012