Scholarship holders of the Cusanuswerk visit the Palestinian Territories

The Konrad-Adenauer-Stiftung (KAS) was pleased to welcome 18 scholarship holders of the Cusanuswerk on Saturday, 9 April 2016. The program organized by KAS focused, in addition to several talks about the Israeli-Palestinian conflict, on the visit of Taybeh, a Christian Palestinian village with biblical importance in the West Bank.
April 9, 2016 Ordering Information 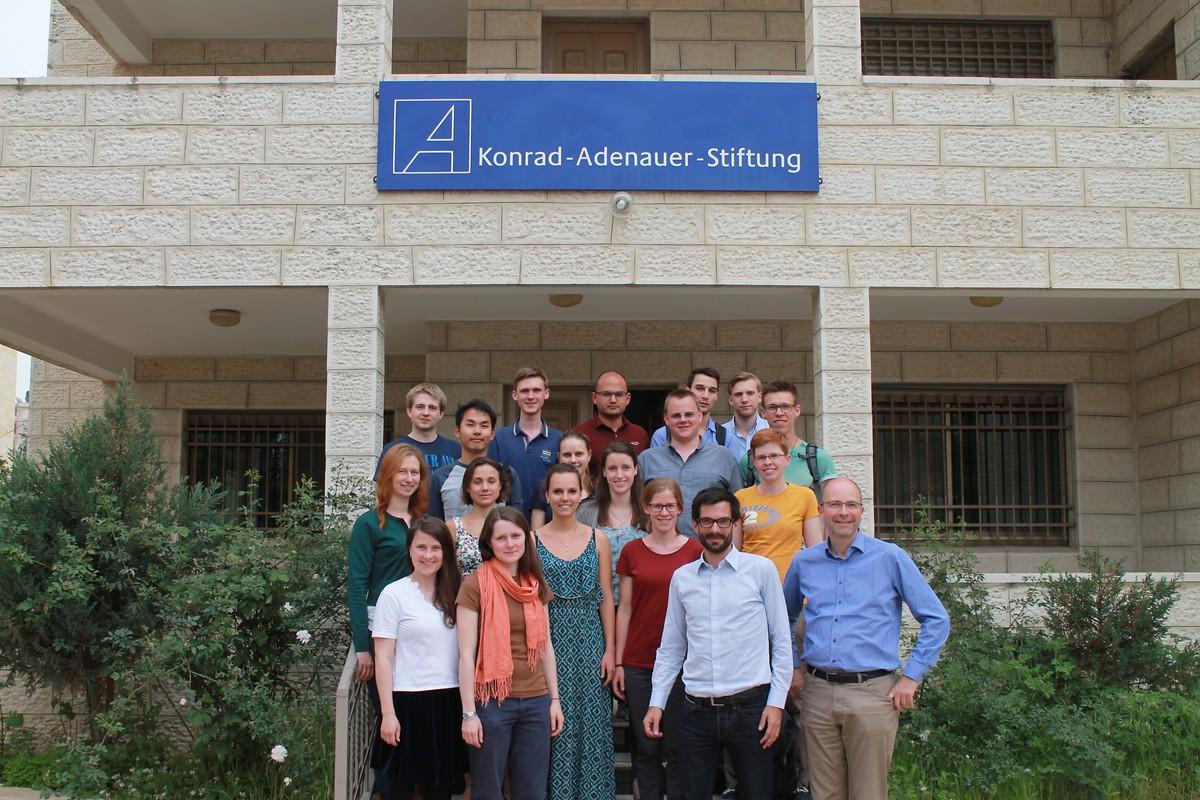 On the bus ride from Jerusalem to Ramallah, the scholarship holders received an introduction about the current political situation in the Palestinian Territories. Ms. Enas Muzaffar, Communication Advisor with the Palestinian Negotiations Support Unit (NSU) emphasized particularly on the difficult legal status of Palestinians in East Jerusalem and pointed out the effects of the expanding Israeli settlements on Palestinian daily life.

While travelling to Taybeh, the thematic focus shifted to both the historical background of the area and the situation of Christians in the Palestinian Territories. The drastic change in the estimated number of Palestinian Christians living in West Bank has dropped from 10 percent of the population in the early twentieth century to 1.5 percent today.

After arriving in Taybeh, the group was welcomed and briefed about the history of the village and present difficulties by the governing mayor Jawad Hanna. Although Taybeh, due to its historic past, is still a popular place of pilgrimage, especially for Christians living in the region, the village had to fight economic problems and emigration like many other Palestinian villages.

A highlight of the day – against the background that the students were on a pilgrimage in the Holy Land – was the meeting with Father Johney Khaleel. He portrayed the religious meaning of Taybeh, in particular with regard to the famous religious people who stopped in the village, and pointed out the importance of the three churches as places of gathering.

During the communal meal the students had the opportunity to engage in a conversation with the staff of the Konrad-Adenauer-Stiftung to get to know more about the foundation’s work and projects in the Palestinian Territories.

The day’s program was completed by a briefing of KAS’ Resident Representative in Ramallah, Marc Frings, who recapped the essential political cleavages of the conflict between Israelis and Palestinians and was able to answer the questions that had come up during the day.