Democracy & Political Systems In the Middle East and North Africa

The report places special emphasis on the results of the KAS-PolDiMed survey regarding public perceptions of preferred political systems and the status of democracy in the Middle East and North Africa among respondents in Morocco, Algeria, Tunisia, Libya, Jordan, and Lebanon.
March 15, 2021 Ordering Information

In 2011, citizens across the region took to the streets to demand more accountability, transparency and social justice. The protesters of the Arab uprisings of 2011 not only demanded economic reforms, but also called for changes to political systems. Long-standing authoritarian rulers had long dominated the region with no country qualifying as democratic based on rankings by Freedom House. Citizens demanded governments that were more responsive to their needs with a greater respect for their citizenry. Among the countries surveyed, Tunisia and Libya witnessed a change in government, while Algeria, Jordan, and Morocco responded with significant reforms and economic support for citizens. Yet, these reforms did not meet the demands of citizens. In 2019, mass protests forced changes in leadership in Algeria and Lebanon while smaller-scale demonstrations have regularly taken place in Jordan and Morocco demanding reforms. As Tunisia’s democratic transition has failed to bring tangible economic solutions, the preferred political system in the eyes of Arab publics remains contested.

The 2020 Survey of the Regional Program Political Dialogue South Mediterranean of the Konrad-Adenauer-Stiftung (KAS PolDiMed) conducted by Arab Research and Analytics Associates (ARAA) makes clear that citizens prefer democracy, but significant numbers would trade it for a system that is effective at achieving meaningful economic results. Despite economic frustrations in the region, citizens report high political engagement. Clear majorities are comfortable approaching politicians, peacefully demonstrating, and participating in advocacy through civil society activity. 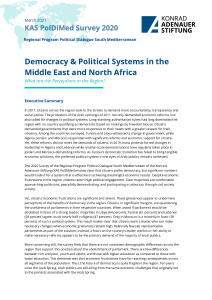