But journalists ask for better application

The Serbian Access to Information Law tops an international ranking and sets a high standard. The Media Program South East Europe of Konrad-Adenauer-Stiftung wanted to know, which experiences Serbian journalists have in practice when requesting information from public authorities.
February 20, 2014 Ordering Information

The Serbian Access to Information Law is on average being assessed as “good” (2 on a scale from 1 to 5) in a recent KAS survey among journalists in Serbia. Media experts not only praise it for its wide scope, but also because it provides for an ombudsman for the public. The Commissioner for Information of Public Importance receives citizens’ complaints, decides within 30 days on contentious cases and authorities are bound by his decisions.

Media representatives are, however, much less satisfied with the implementation of the law. The willingness of government and other authorities to disclose information is only viewed as “average” (3 on a scale of 1 to 5). The conduct of national, regional or municipal authorities does not seem to differ much in that respect.

All participants in the survey said they had experienced difficulties with obtaining information in accordance with the law at least once. The participants were often investigative journalists, which is why their experience does not necessarily reflect that of all media representatives. However, the result shows that numerous authorities still lack openness and transparency. All survey participants agree on this fact. Two thirds of them have already noticed improvements, though.

Grounds for authorities’ refusal to disclose information are numerous, so journalists claim. They include the protection of personal data or “commercial secrets,” for instance, when contracts with businesses are concerned. Some bodies deny that they have the status of a public authority altogether. Others refuse access due to procedural mistakes made by the applicant or deny their responsibility.

In individual cases authorities have untruthfully denied to be in possession of the relevant documents or simply provided incomplete material. Frequently, the 15-day deadline regulated by the law is violated, in some cases likely due to an unmanageable number of requests or a lack of qualified personnel. Those problems are hardly specific to Serbia or South East Europe in general. Many of those tactics by the public authorities are also criticised by journalists in Germany.

More room for improvement is also observed by the media representatives on part of legislation. A number of journalists demand more comprehensive powers for the Commissioner to impose sanctions on non-complying authorities. Furthermore, it is being suggested that penalties should not be directed at the authority as a whole, which can easily cover the fine with their budget. Rather, they should be addressed to the director or individual in charge. 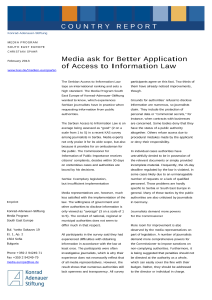