Keep the spirit of Sofia thriving!

„EU Enlargement from Sofia to London and Beyond: Results and Perspectives for the Western Balkan Countries“ in Niš and Novi Sad. June 26th - 27th 2018
July 2, 2018 Ordering Information

As a strong partner of Serbia on its path towards the European Union it was natural that KAS Belgrade participated on this series of conferences organized by the Bulgarian Embassy and the Center for Migration Research. Insights, progresses but as well problems on the European path of Serbia were high on the agenda, all under the sign of „the spirit of Sofia“.

An atmosphere of friendship and closeness were sensible on the conferences and the excellent speakers talked and discussed very inspired about the possibilities and obstacles of Serbia on its way into the European Union.

The ambassador of Bulgaria, h.E. Radko Vlaykov emphasized in its introducing speech the good relations of both countries, which are more than just mere neighbors. He mentioned also the big enhancements Serbia made in its politics addressing minorities and the big steps towards the European Union and a possible accession in 2025.

In Sofia, the Bulgarian government took efforts to show that the Balkans are not just n unimportant region that should be left in oblivion. A stable, free and secure Europe is only possible if the Balkans are integrated in the European family.

Following this introduction Ingrid Shikova, PhD, professor for European politics at the Kliment Ohrid University ofSofia spoke about the history of the Bulgarian presidency on the European Commission. As a part of the Balkan family, so Mrs.Shikova, it is only naturally that Bulgaria is taking efforts for its good neighbor Serbia on the path in the EU. “My dream was back then, that my country becomes one day a member of the Union. This dream became reality. Now I have a new dream that our friend, Serbia, soon also gets a full member.”

Srđan Majstorović, Center for European Politics, underlined in Niš, that the opening of new chapters in the negotiations with the EU weren’t just „demands“ by the personal whish of political organs. All partners ought to communicate that the reforms are for the sake of the people of Serbia, so that they can have a life in security and freedom provided by the realization of those chapters.

Rule of law, simpler bureaucratic steps, economic improvements and protection of every citizen have to be a key topic for Serbia to become a nation of European values.

Marija Bulat, local branch officer in the Regional Youth Cooperation Office (RYCO), hold a lecture in Novi Sad about the biggest chance for future the Western Balkans has: young people from every country in the region. It is only them who can realize reconciliation with the neighboring nations and to build friendships through understanding. Who knows that he is among friends who he can trust, must not be afraid anymore that there will be violent conflicts or mayhem.

In Novi Sad we had the possibility to hear a special guest: Predrag Praštalo from the European Movement in Bosnia and Herzegovina. He had a very strong message for the audience. The chance for peace and prosperity that still exists on the Western Balkans should not be bargained away recklessly. In his homeland one could find currently an atmosphere of political hardening which could only be overcome with positive energy for a change, just as it was the case in Sofia. Serbia, which is making huge progress on the way in the EU should be a role model for Bosnia and Herzegovina because it shows, that the superior goal of all parties should be to make life better for its citizens, not to exploit ethnic tensions for the own selfish political goals. It is important, so Praštalo, that also strong countries not forget the importance of the Balkans. Profound knowledge about the local situation must be delivered to these European partners so that they can give the right impulses for reforms and a better future.

On all of these conferences KAS Serbia, Montenegro once again emphasized that the foundation backs Serbia in every way on its path to a full membership in the European Union. The presidency of Bulgaria in the European Commission also bared another positive impulse for Belgrade: that change to the positive is always possible and that a country could work actively for a better reputation in Europe by stressing its positive sides and aspects.

In the end, h.E. Radko Vlaykov just found the right words to close the conferences:

„I am not just sure, I am totally convinced, that Serbia will become a member of the European Union. The efforts and the progress that the people and the politics in these country are taking, do not allow having any doubts on that. If we carry on with the spirit of Sofia, which is a spirit of cooperation and togetherness, then there will stand nothing in the way to success!“ 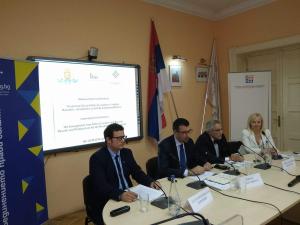