The Foreign Policy Forum: Regional Powers in Global Politics accompanies South Africa’s membership in the UN Security Council during its two-year term in 2019-2020. It consists of a series of roundtables each dedicated to a particular theme. The overarching topic is the role of regional powers in global affairs which is characterized by a return of great power politics and erosion of multilateralism. Each roundtable consists of a select group of local and international experts. In this fifth event, we are looking back at the last two years and explore achievements and controversies which accompanied the terms of South Africa and Germany in the Security Council. Have both countries fulfilled their promised agenda, how have they dealt with great power contention over Venezuela or Syria? Could non-permanent members ease tensions or have they contributed to block-building? What role can African members of the Security Council play in advancing continental issues?
May 19, 2021 Ordering Information

For the second time since 2011 and 2012, Germany and South Africa served together as elected members of the UN Security Council in 2019 and 2020. In 2020, both countries also held regional leadership positions in the European Union (EU) and the African Union (AU) respectively. With rising geopolitical tensions among the great powers, regional powers are attributed an important but difficult role: facilitating effective multilateralism in a time of increasing tensions and further fragmentation of global governance institutions. As liberal democracies, regionally leading countries and economically dominant powers, they are theoretically predestined to leave a constructive imprint on global politics. However, the role and influence of the elected members (E10) also depend on their ability to seek and craft consent on controversial issues, not only in relation to veto-holding powers but also among themselves. This paper evaluates how Germany and South Africa have managed their term in the Security Council. Have both countries been able to craft a stronger E10 partnership, or have persisting great power rivalries and disparate national interests and values distanced the two countries from one another? What opportunities for enhanced cooperation have emerged and in which areas do fundamental differences remain? 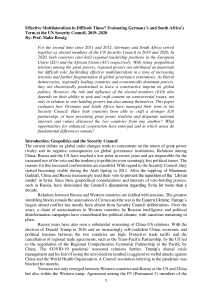