The community outreach was aimed at boosting the knowledge in rural communities in Zomba about women’s rights to access, own, use and control land, and enhance the women’s capacity to protect and claim these rights.
February 21, 2018 10:00-14:30 Clock

Aim, partners and target group of the event

The community awareness outreach took place at Sani II Village in Traditional Authority (T/A) Malemia in Zomba-Malawi. The event was aimed at boosting the knowledge of rural community members (including widows, single mothers as well as men) in Zomba about women’s rights to access, own, use and control land, and enhance the women’s capacity to protect and claim these rights.

It was co-organized by KAS and Women's Legal Resources Centre (WoLREC through its District Coordinator- Mrs. Margret Chilongozi. Utilizing its local outreach structures and in collaboration with the traditional leaders, WoLREC invited the participants and T/A Malemia to the event. While 120 participants were expected to participate, 147 participants attended, approximately 85% women, 15% men. The participants also included community facilitators and 10 traditional leaders (5 males, 5 females. The event was also attend by the KAS EWoH2 project team from Namibia, South Africa and Zimbabwe.

In addition to the remarks from KAS, WoLREC and traditional leaders, the programme included a comedy, drama display and a poem by the local community members. The remarks from KAS and WoLREC emphasized on the project objectives and encouraged for change of mindset among community members (both men and women) regarding landownership rights for women as stipulated in the new land law. On his part, traditional authority Malemia appealed to all his traditional leaders under his jurisdiction to acquaint themselves and comply with the new land law, ensuring that they protect the rights of women in resolving land/property inheritance disputes and in making land allocation decisions.

The edutainment comprising traditional dances, songs, comedy and poems echoed with one common message of protecting and promoting land tenure and land ownership rights of women. The extent to which participants assessed the relevance of the event was established in the closing session in which participants were asked to highlight the major lessons from the drama, comedy and dance displays.

First, participants confirmed that the drama and comedy displays correctly depicted the prevailing traditional and cultural practices of dispossessing widows and orphans of their legitimate deceased estates (including land) once their spouse or parents passed on. Second, it was also established in this feedback session that some traditional leaders solicit and/or accept bribes to unjustly decide against women, especially widows in land ownership disputes.

Third, participants were equally able express their joy and appreciation having learnt from the outreach regarding how the newly enacted land law will protect and promote land tenure rights for women in Malawi, and who they could approach when such rights are violated. In the closing session, participants and traditional leaders requested for such community outreaches to be conducted more frequently especially after the peak farming season, to realise the desired behavioral change among traditional leaders, community members and women themselves. 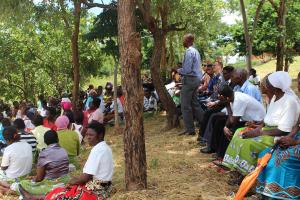 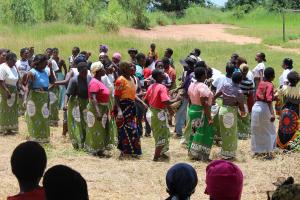 Community women sing and dance in praise for new knowledge on land ownership rights for women through the EWoH2 project during the SaniII Community awareness outreach-Zomba in Malawi. 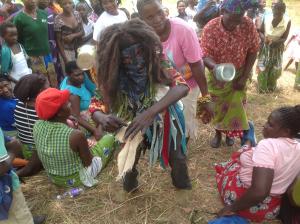