Foreign Policy Forum: Leaders or Laggards? The Role of the Elective Ten in the UN Security Council

Trump demanding America first, the British leaving the European Union, Russia annexing Crimea – we have seen multilateralism eroding and nationalism gaining strength in several regions over the last years. International institutions like the UN Security Council (UNSC) are as important as seldom before in history. The round table discussion on 15 May 2019 dealt with this crucial issue and the impact regional powers can have on it. The Konrad-Adenauer-Stiftung (KAS) and the Canadian High Commission funded this event which forms part of a series of six roundtables. Thereby the event series accompanies South Africa´s and Germany´s membership in the UNSC in 2019-2020. In Johannesburg, local and international experts and academics discussed the challenges and opportunities which non-permanent members or Elective Ten (E10) are facing. On the one hand, some of those countries have more in common with some of the per-manent members of the UNSC (P5) than with other E10. On the other hand, the lack of ideas and constructive leadership on an international level creates possibilities for regional powers like South Africa and Germany to step in and have a positive impact.
May 24, 2019 Ordering Information 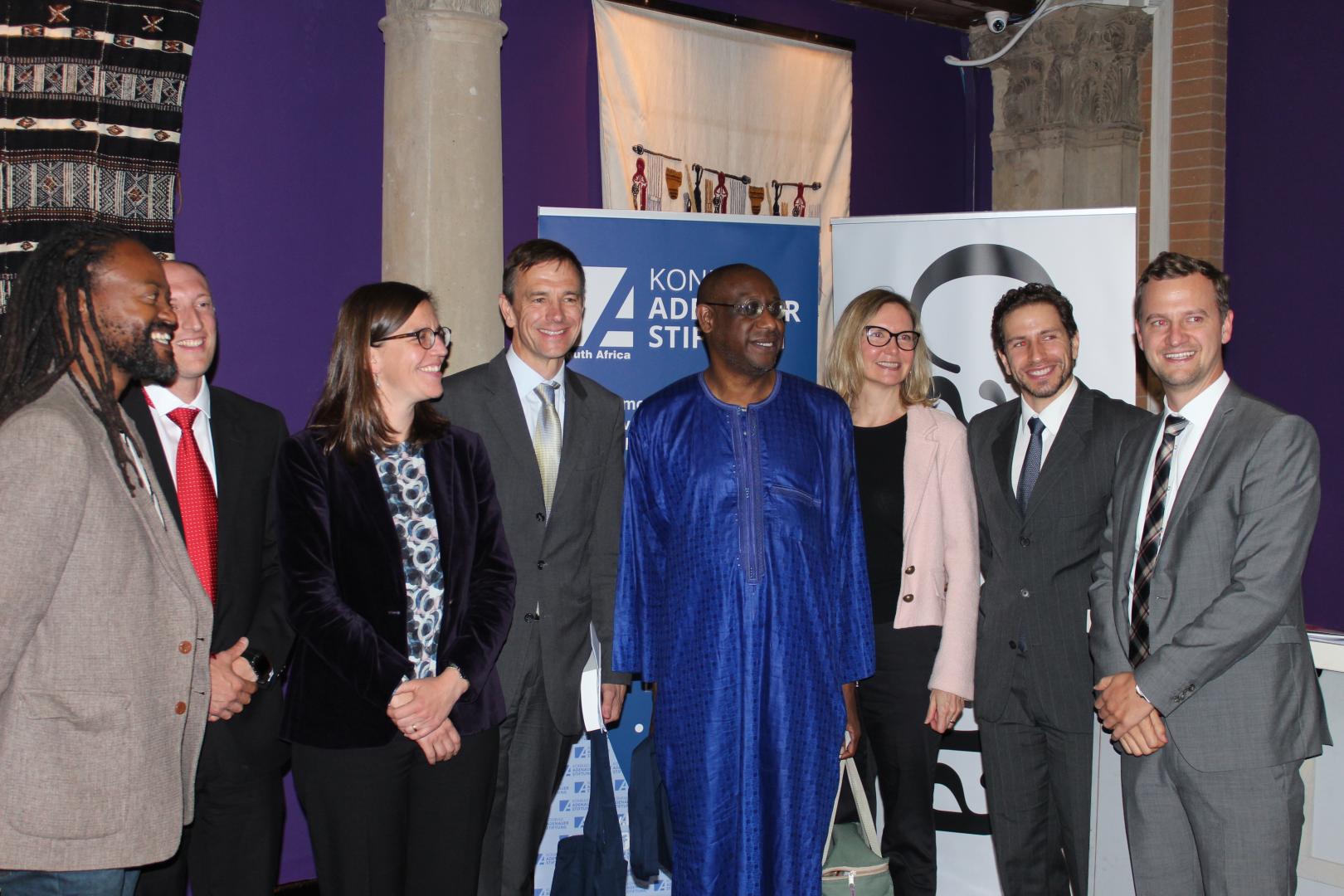 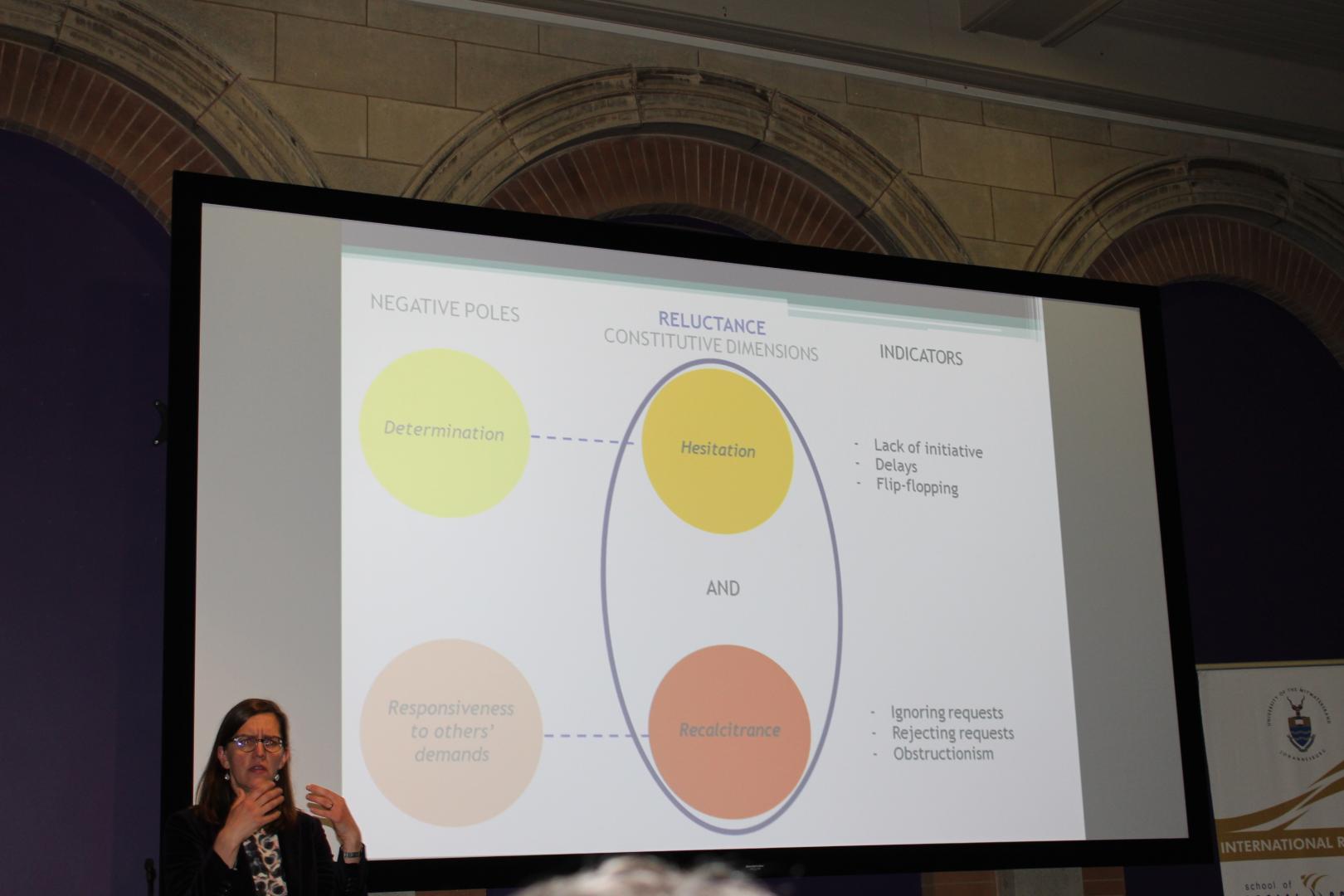 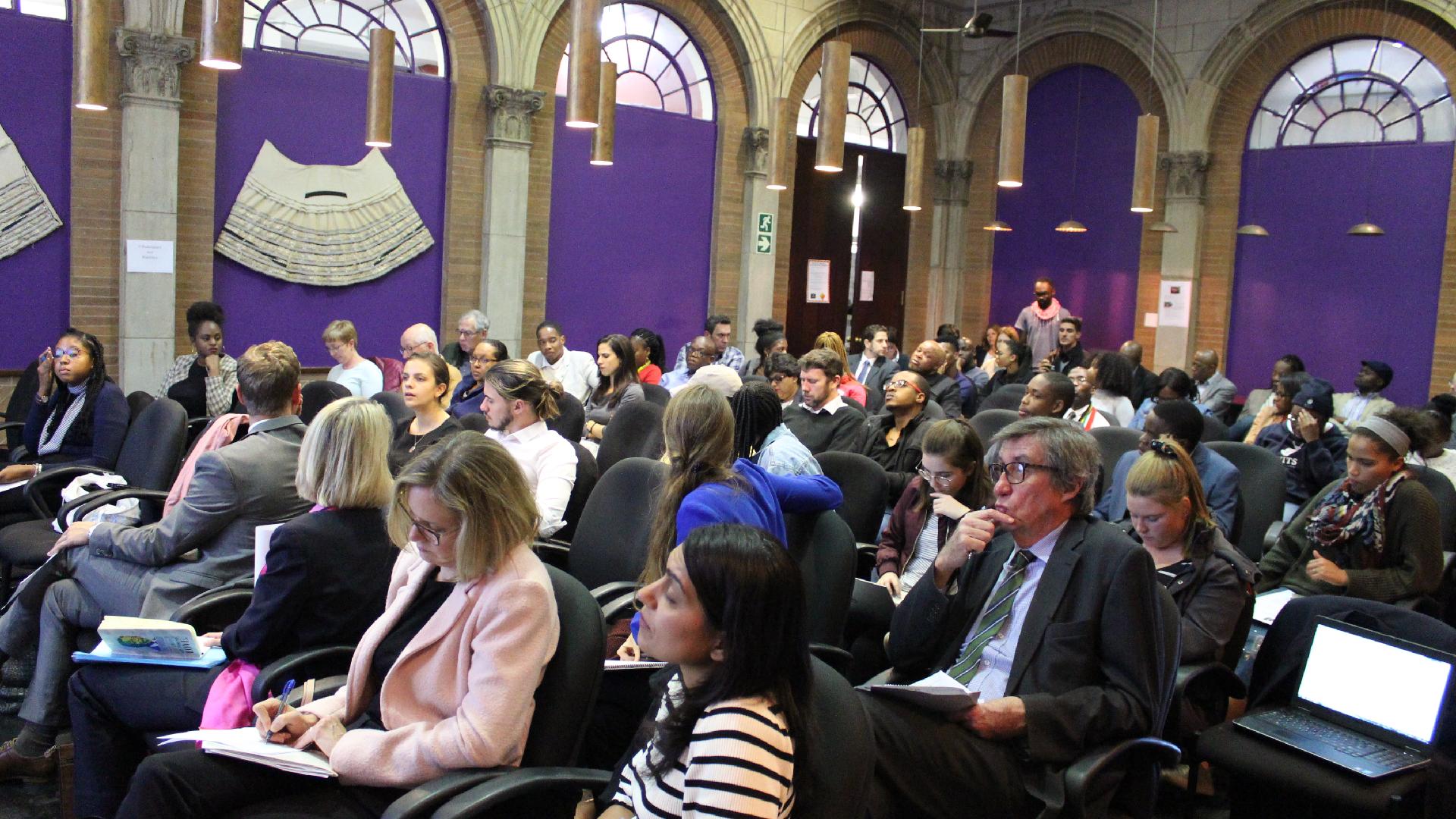 Interaction with the audience 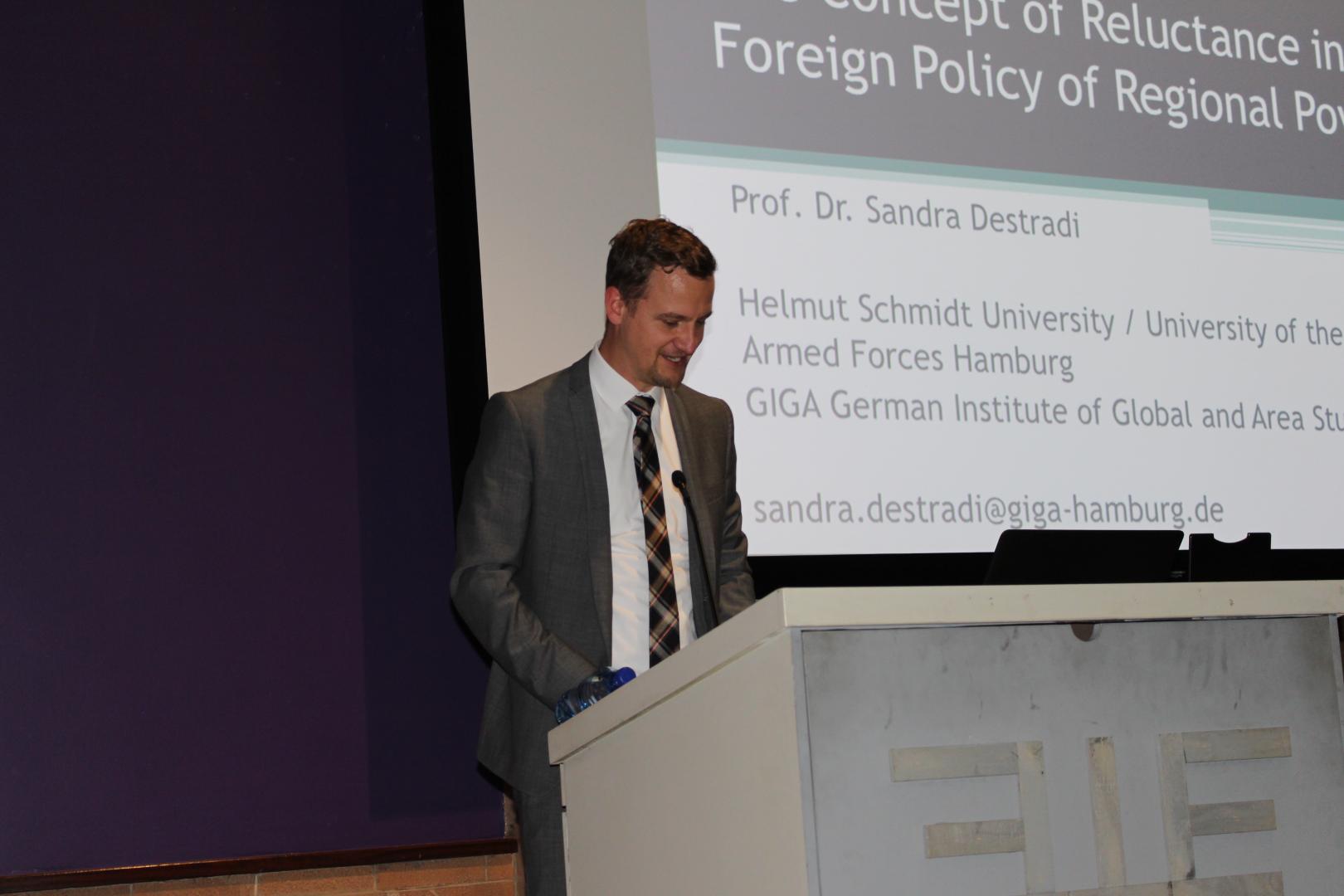 In his opening remarks Henning Suhr, Resident Representative of KAS in South Africa, mentioned some worrying examples which often are cited by critics who see multinational cooperation threatened nowadays. The geopolitical world is shifting. While institutions like the UN keep on contributing to achieve a better tomorrow, multilateralism has stagnated. Democratic principles are questioned by populists who criticize multilateralism for being too slow. Liberal institutions are getting destroyed from within by political actors who prioritize national interests over the common well-being. By far the US is not the only example pursuing its nationalist agenda, but also various leaders of populist parties in Europe are demanding policies driven primarily by national interests. While the role of former global powers and platforms of cooperation might rather seem to diminish, new actors have gained geopolitical influence. For example, China has been establishing its role as important global player by creating own international institutions and projects like the Asian Infrastructure Investment Bank, a counter-model to the World Bank, or the so called Belt and Road Initiative (also known as “Silk Road”.) However, multilateralism firstly needs the willingness of states to work together. Cooperation requires obeying common norms and regulations. There is a demand for constructive ideas and determined actions by the international community.

With its academic and highly experienced speakers from various continents, the event aimed to represent the variety of nations and perspectives within international organizations like the UN. The controversial debate not only dealt with the topic of multilateralism, but also showed what this notion means in practice. So which role can the E10 have? First of all, it is important to understand how regional powers act and what influences their decisions. In her key note speech, Professor Dr Sandra Destradi (German Institute of Global and Area Studies Hamburg) presented a scientific concept in order to explain their behavior.

She introduced the concept of reluctance in foreign policies of regional powers. In academic literature, reluctance is often defined as a “lack of coherence or being ambivalent”. It is also very helpful to think of what the concept is not. This means a country is not reluctant when it has “a very clear, straight forward, determined policy” and shows “responsiveness to the demands of others”. In a political context, it often refers to states being slow in implementing treaties they had committed to. Further she created awareness of the fact that hesitant behaviour is not a bad thing per se, but can rather be a side effect of democratic decision-making. She went on to explain that a multitude of actors and institutions within one state are an indicator for reluctance. Another reason for a state being disinclined to take action is that other states might interpret this as meddling, unclear goal setting or strategic reluctance. The latter means that a player is unwilling to act because it is the optimal behaviour for her. An example thereof is Germany and its unwillingness to engage in military action.

Why the E10 haven´t achieved more

In the following panel discussion, the speakers explained different views on the UNSC. It became apparent that the status quo of the council can be described as stuck. Dr Philani Mthembu (Institute for Global Dialogue) pointed out that smaller countries often run the risk of “getting drawn into long standing arguments between great powers”. Hence they do not engage or come up with new ideas. He made reference to the US foreign policy which often forces smaller countries to decide whether they support or oppose the US American approach. But even for regional powers like Germany, it is difficult to “get something off the ground as it has to start from scratch every eight years”, added Dr. Martin Schäfer, the German Ambassador to South Africa. Hence it is complicated for a country to get its own way with the P5.

Additionally, the E10 countries can have very different goals and perspectives. Professor Adekeye Adebajo (University of Johannesburg) explained that the E10 partially do not work jointly. He clarified that Belgium, Poland, Germany (all E10), France and the UK (all P5) are members of the EU. So they are aligned with each other at least in the most basic aspects. They have similar goals and might even aim to “implement a common European foreign policy”. On the other hand, there are countries like South Africa which forms part of the BRICS (Brazil, Russia, India, China, South Africa). Accordingly the country tends to share and support Russian perspectives and proposals. Nevertheless, South Africa has possibilities to use its seat in the UNSC in a good manner.

The international community has at present a strong demand for new and constructive ideas to develop multilateralism further. “It is a perfect time for South Africa to engage and somehow get a more important role” said Mthembu. For regional power countries, there is an opportunity to demonstrate leadership and to act as “bridge builders”. The Canadian High Commissioner to South Africa, Sandra McCardell, explained that these countries can be the “glue that keeps the bricks of multilateralism together”.

After having discussed the issues of the UNSC and having discussed some ways of how to solve them, the question of how states can approach a multilateral problem or conflict arose. In this regard, several aspects were addressed: For example, there have been several military actions in the past decade, e.g. the war in Syria. When it comes to Venezuela, right now military interventions are openly discussed by some countries as viable approach to the swelling crisis under the dictatorship of Nicolás Maduro. However, most panelists agreed that, when it comes to intervening in foreign countries which suffer from a humanitarian crisis, military action should be the last option. They stated that the kind of intervention which should be pursued always has to aim at achieving peace through negotiations and dialogue. Otherwise, the intervening countries might worsen the situation instead of resolving it. Philani Mthembu surprisingly explained that intervening actors “rarely start to open a dialogue” or try to find a solution which was elaborated by all parties and actors affected by the crisis. They “have a clear solution in mind” before intervening. For a successful intervention, it is necessary to be aware of the fact that the actors of the respective country need to own the solution and explain it to their fellow countrymen. According to Dr. Martin Schäfer, taking military action has to be the very last option. He mentions the Marshall Plan of the late 1940s as an ideal way of defending national interest without intervening militarily. Rubens Douarte (Institute of Military Forces Brazil) argued that Western countries recognising the “self-declared Venezuelan interim president Guaido as legitimate head of state” is in contrast a bad way of diplomatic intervening. He explained that “you can either be democratic or not. That means you cannot recognize an “undemocratic” president only because he is more in line with your goals”. He admonished Western countries to be more consistent.

Henning Suhr indicated that the Konrad- Adenauer-Stiftung is engaged for peace and security worldwide and therefore organized with its partner, the Wits-University, this series on foreign policy. The Konrad-Adenauer-Stiftung creates a space for discussion in order to reflect on multilateralism and the question how it could be strengthened. Dialogue is the first step.

As the debate revealed: it is unlikely that the status quo of the UNSC is going to change and the E10 are not pulling in the same direction. They often fail to cooperate in order to increase their influence and decrease the dominance of the P5. Taking the right approach and considering the opportunities and the limits of their influence, the E10 could be part of a productive and positive change in the near future. In this regard, regional powers like South Africa can play a crucial role. Thanks to the participants, this panel discussion succeeded in giving thought-provoking insights and a profound understanding of how international relations work. More mutual understanding is necessary between European, American and African perspectives to find common ground for dealing with global challenges. 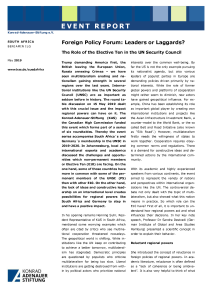 Leaders or Laggards: The Role of the Elective Ten in the UN Security Council