United Nations declared 2019 The Year of Indigenous Languages (IY2019). This was done “in order to raise awareness, not only to benefit the people who speak these languages, but also to appreciate the important contribution they make to our world’s rich cultural diversity”. Indigenous languages worldwide face the threat of extinction.
November 12, 2019 Ordering Information

South Africa has eleven official languages however in general English dominates as the language of business and teaching. Afrikaans also has some prominence as a medium of instruction in schools as well as at institutions of higher learning. Though it is now being challenged as some Universities, which were previously using Afrikaans as a medium of instruction are now replacing it with English.

Indigenous African languages are lagging far behind, some of them are not recognized as official languages. For instance, a language like Khelobedu and many others are not given proper recognition as a result they may face extinction.

According to statistics presented by Dr Conrad Steenkamp (ILAF):

Indigenous languages are used for:

Zama Bekweni in his presentation on the value of multilingualism in business stated that advertisers use diverse languages to reach their markets, call centres also do the same, banks use multilingualism on their Automatic Teller Machines (ATM) therefore business must recognize multi-lingualism as a resource for economic growth.

There are many benefits of using indigenous languages as a medium of instruction. Learners understand better and grasp concepts easily when they are taught in their mother tongue and this translates into high achiever rates. Learning in mother tongue also improves the learner’s confidence to participate in class because they can express themselves freely. Learners who are taught in a different language besides their mother tongue are at a disadvantage. A student who is in the process of registering for her PHD in Northern Sotho at the University of Limpopo felt empowered to approach the University and convince her lecturers to allow her to write her dissertation in Northern Sotho after listening to presentations at the conference.

Mr Mashatole, a lecturer at the University of Limpopo mentioned some myths against adopting multi-lingualism:

However, some parents settle for English because they are not given an option for their kids to be taught in an indigenous language:

The political, economic and social development of Africa is delayed as a result of the disregard of indigenous languages. Some children are struggling to read with comprehension when being taught in any language, other than, their mother tongue.

Multilingualism is a driver for the growth of the economy.

Practical steps must be put in place to help with the promotion of indigenous languages and multi-lingualism. For instance, at the University of Limpopo there is a qualification known as Bachelor of Arts in Contemporary English and Multilingual Studies (BA CEMS). In BA (CEMS) students are taught in an indigenous language and English.

There was active participation and engagement from the delegates and most expressed the wish to have a follow-up conference in 2020. 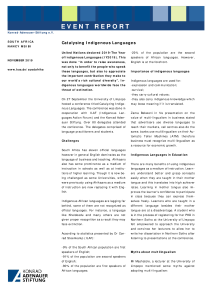