Induction Training Workshop for Promoters and Community Facilitators in Mzimba

On 9 and 10 April 2018, the induction training workshop for promoters and community facilitators took place in the Mame Motel in Mzimba with 24 participants. The aim of the workshop was to present the translated drafts of the Tumbuka versions of the Civic Awareness Materials for Community Facilitators and the Orientation Materials for Customary Land Committees to the promoters and community facilitators and to collect their contributions to the completion of the drafts.
May 23, 2018 Ordering Information 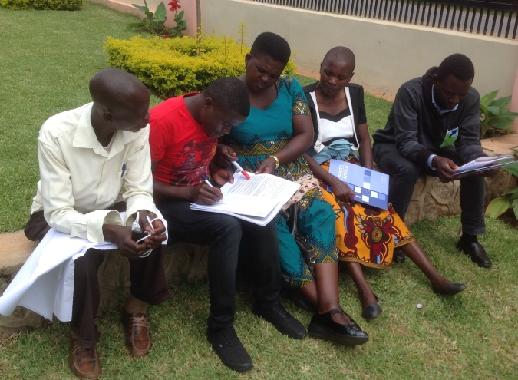 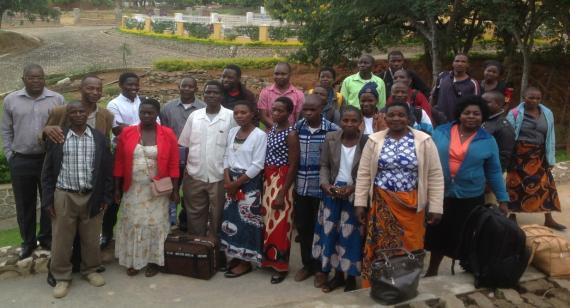 Group photo: Participants and facilitators after the Mzimba workshop 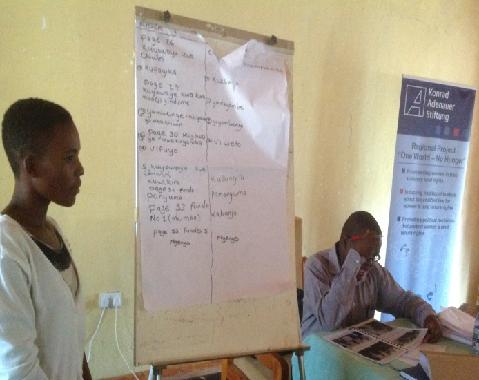 Group presentations in plenary at the second day of the workshop 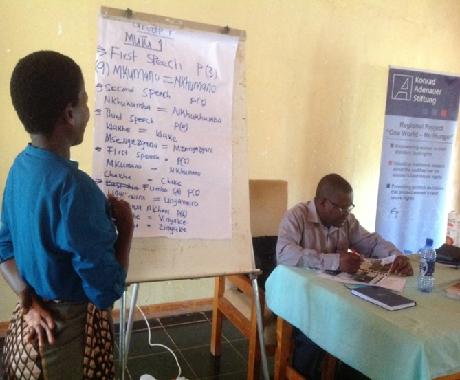 A participant discussing and presenting in plenary 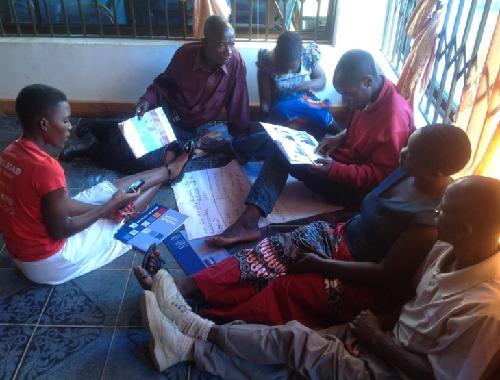 The induction training workshop for civic educators from partner organisations (NASFAM and FUM) in Mzimba was conducted between 9th and 10th April 2018 at Mame Motel in Mzimba. The workshop was aimed at introducing the translated draft Tumbuka versions of the Civic Awareness Materials for Community Facilitators, the Orientation Material for Customary Land Committees and the draft comic flyers of both materials to the field officers/community facilitators and seek their inputs towards finalising the drafts. It was envisaged that once edited, finalised and printed, utilisation of the materials in local language would significantly enhance the civic awareness campaigns in rural communities.

Theme of the activity

The training workshop was intended to contribute towards the first and the second project objectives. The first objective states that women are informed about their land ownership rights (both customary and statutory laws) and the possible means of legal redress and begin to demand these rights, while the second objective states that in settling land disputes, traditional authorities increasingly consider codified law and strengthen the position of women in issues of land use and land ownership. As Malawi will soon be implementing the new land law, there is need to create broad-based civic awareness among the citizenry, especially women, widows, youth and traditional leaders about the new land laws. The EWoH2 project in Malawi engaged a legal expert to systematically compile a simplified version of the new land law as handbook for community civic educators. The two-day training workshop was therefore necessary to introduce the translated Tumbuka versions of the civic awareness materials to the community civic educators and create local ownership of the materials.

Once printed, the Tumbuka awareness manual will be the main tool for the community civic educators in awareness campaigns aimed at changing the mind-set of traditional leaders and entire communities towards promoting and protecting women’s access, ownership and control of land and its resources. It is the understanding of such information that will transform the attitudes and behaviour of entire communities, away from repugnant customary practices, towards compliance with the new land law.

The workshop was fully financed by the KAS. The event was jointly organised by KAS and its cooperating partners: NASFAM and FUM in Mzimba.

In total, 24 participants attended this induction training workshop: 15 women, 9 men. The language expert consultant who translated the materials – Dr. Masauko Msiska was the main facilitator of the workshop, assisted by the KAS Programme Coordinator – Dr. Samson Lembani. The workshop programme blended power-point presentations by the consultant with group discussions and plenary flipchart presentations by the participants.

The KAS Programme Coordinator welcomed all participants and outlined workshop objectives. He emphasized that it was imperative for participants to be familiar with each of the seven topics covered by the Civic Awareness Materials for Community Facilitators, and the Orientation Material for Customary Land Committees, coupled with their respective comic fliers, in order for them to confidently, competently and systematically initiate their own civic awareness activities. Participants were therefore encouraged to diligently critique and scrutinize the draft Tumbuka civic awareness materials and suggest improvements to ensure that the final versions will be customised and end-user friendly.

After the overview presentation on the workshop objectives and programme, participants were asked to express their workshop expectations and share what they had been able to do in their villages on civic awareness without the presence of KAS. The expectations captured above reflect that (a) through the workshop, participants hoped to have most questions on the subject to be clarified, for which they had no or vague answers, partly due to their limited English language competences, (b) they expected to be empowered through improved understanding of the translated materials, posters and fliers and in turn, be able to implement and report on their awareness activities. It was discernible that after the April 2017 workshop, a number of participants had taken individual first steps to engage with their traditional leaders and community members to introduce the project to them. The additional knowledge acquired from this workshop would make them better equipped and more confident for regular civic engagements with their community members, taking advantage of any community gatherings and events.

Following the session on participants’ expectations and accomplishments, the consultant, Dr. Masauko Msiska introduced the newly translated Tumbuka civic awareness material. Afterwards, participants made preliminary reflections and comments before they went into four groups. Each group was to thoroughly review one or two topics. After group discussions, each group presented their input in plenary while the other participants argued or confirmed what was being suggested in the presentations.

After group review sessions and plenary presentations on the second day, the process was finalized and constructive comments were received on the orientation material and its comic flier. By the end of day two, the two translated Tumbuka versions of the civic awareness manuals and their respective comic fliers were revised and made ready for final text and graphic editing before printing.

The intended outcome of this workshop will be observable after participants begin to submit their activity reports reflecting the quality and content of their improved understanding of the civic awareness manual.

This orientation and materials review training workshop was a vital investment towards an improved and effective delivery of civic awareness messages at community level through both the civic educators, traditional leaders and the weekly community radio programmes. Once printed and distributed, the Tumbuka civic awareness materials will lead to improved understanding of the new land law and help to initiate behavioural change among community members in Mzimba.

Induction Training Workshop for Promoters and Community Facilitators in Mzimba