On 23rd of November 2018, the Konrad-Adenauer-Stiftung (KAS) in cooperation with the South African Ubuntu Foundation (SAUF) hosted the Ubuntu Business and Networking Breakfast on the topic “Leadership lessons from the KPMG intriguing story” at the Cullinan Hotel Southern Sun in Cape Town.
November 27, 2018 Ordering Information 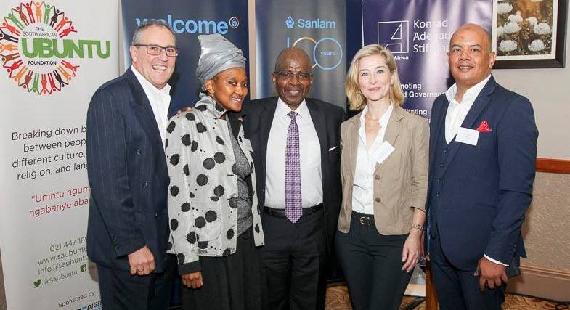 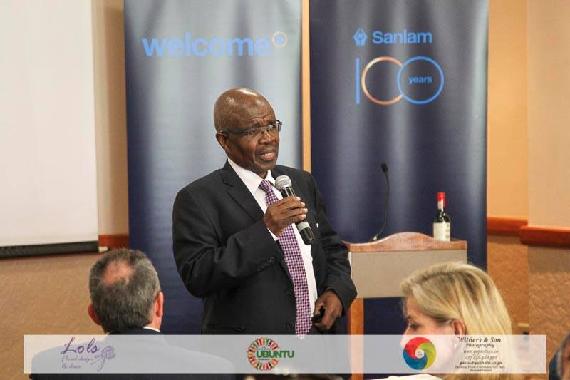 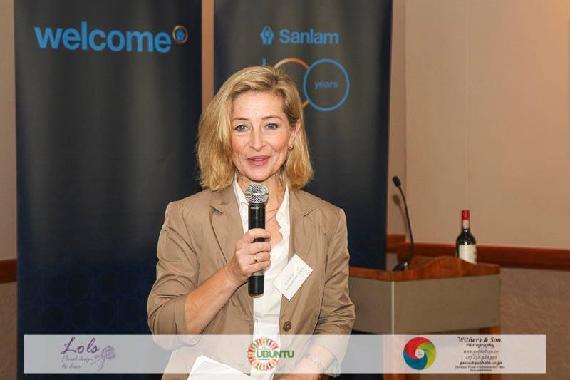 Christina Teichmann, KAS Project Manager, welcomes the audience on behalf of the Foundation. 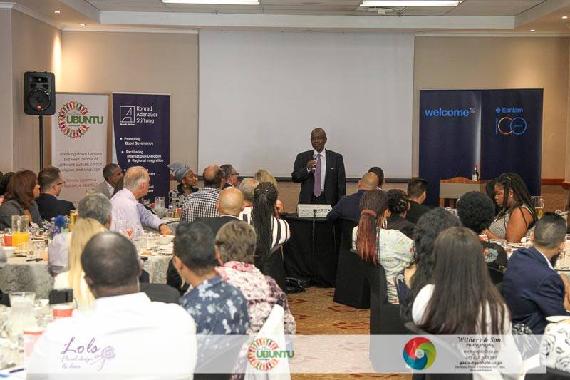 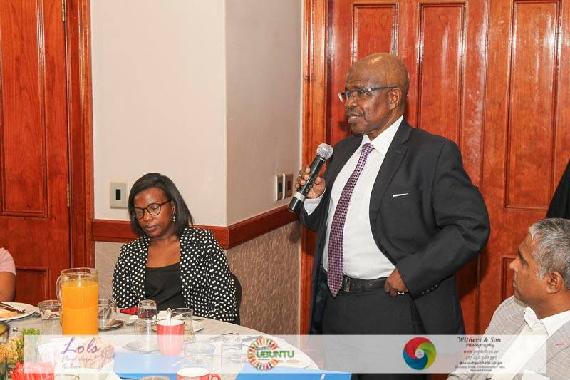 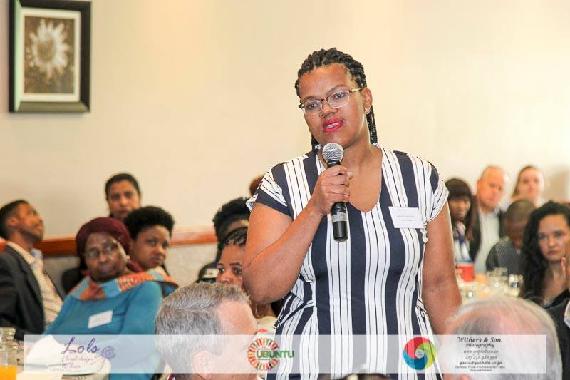 A participant during the Q&A Session

The keynote speaker who was invited to share his thoughts on the topic was Professor Wiseman Nkuhlu. Prof. Nkuhlu is Chancellor of the University of Pretoria and Trustee of the International Financial Reporting Standards Foundation. Furthermore, in March 2018, KPMG South Africa appointed Prof. Nkuhlu as Chairman of the Board in order to mark further progress in strengthening the governance and leadership of the firm after it became public that the company was deeply involved in corruption and state capture.

Ms. Vuyo Koyana, board member of SAUF, opened the event and was followed by Christina Teichmann, KAS Project Manager, who welcomed the audience on behalf of the Foundation. In her speech, Teichmann referred to the King Reports Guidelines and Principles which were developed by the Commission on Corporate Governance under the leadership of Judge Mervyn King. The reports aim to promote ethical leadership and sustainable business practices by providing the corporate sector with clear guidelines on how to conduct their business. Within these so-called King Reports Guidelines and Principles that are very well-known by auditing firms like KPMG SA, three principles stand out: Ethical Leadership, Sustainability as an economic imperative and Good Corporate Citizenship. However, according to Teichmann, KPMG has blatantly ignored these three principles in recent years. The questions need to be asked how this could happen and why established control mechanism did fail. Teichmann argued that it is not enough to analyze the factors contributing to the KPMG crisis but to draw lessons that might help other corporates to avoid similar mistakes.

In the beginning, Prof. Nkuhlu emphasized that the tragic story of the auditing firm KPMG SA needs to be shared and understood in order to learn from it by stressing the crucial role of corporates in society and highlighting that society only works if there is trust in institutions. In this context, Prof. Nkuhlu reflected on the role of auditing companies providing that trust. According to Prof. Nkuhlu, there is no doubt that organizations, especially private sector organizations, are driven by self-interests. As a result, auditors have to look after the actions of managers and CEOs to assure that all systems work properly and that the business is run with honesty and integrity and in the best interests of the public, employees, investors, creditors and the government that provides the business environment.

In the following, Prof. Nkuhlu picked up on the developments and incidents at KPMG that lead to the crisis. He stated that after many successful decades in the auditing industry and with a growing client base, management had become complacent and even arrogant to a certain extend. He further stated that in recent years the company has been shaped by mismanagement and the failure of doing proper audits instead of detecting deliberate fraudulent practices and taking actions against them. As a result, KPMG became “a colluding collusion with corruption and state capture its center” that caused a fundamental collapse of public trust and that of the business community.

Prof. Nkuhlu’s analysis led him to the conviction that the crisis within KPMG SA can partly be explained by a neglected risk management. KPMG SA has long been a professional service company that was able to deal with the complexity of financial institutions and new technologies and shared its Know-how by advising smaller companies. However, in case of KPMG SA their success also caused the arrogant belief that no problem is too complex. As a result, so Prof. Nkuhlu, the company paid less attention to risk assessment. According to Prof. Nkuhlu, KPMG SA reached its high level of reputation, respect and trust by society and businesses during a particular period of time, when the leadership of the company was committed to proficiency, quality and integrity. This excellence, in Prof. Nkuhlu’s view, was preserved by repeatedly carrying out all their duties in a diligent, trustworthy and professional manner and a constant correction of emerging anomalies to avoid a weakening of those systems that concern integrity and quality. With a new generation of leaders, taking over the management of the company, the values on which KPMG’s success was built on, got eroded as the new leadership did not fully grasp how KPMG SA achieved its reputation as a top auditing firm and hence, took it as “god-given”.

Establishing a Foundation for a new KPMG

Subsequently, Prof. Nkuhlu discussed the measures taken after KPMG’s involvement in state capture had been uncovered. One of the first steps was the suspension of nine of the top leaders. However, at this point, KPMG SA did not understand that in matters of public trust dealing with the issue is not just a question of getting the best lawyers but to directly and transparently engage with stakeholders in order to regain trust. Moreover, it took KPMG very long to recognize that the company’s culture is seriously damaged and cannot self-correct. During the last months, all audit files of KPMG SA have been checked in terms of quality and compared to KPMG standards worldwide by independent experts which confirmed that attention to quality controls has deteriorated over years. On commission of these audit files and taking the analyses of the Gupta files and incidents at the South African Revenue Service (SARS) into account, KPMG is now at a point where policies and practices are redesigned to deal with the issue and to establish a foundation for a new KPMG SA which not only concentrates on revenue, but also attach importance to sanctions for audit failures that affect quality and integrity.

In the end, Prof. Nkuhlu summarized what lessons need to be learned from KPMG’s intriguing story. First of all, a sustainable company requires a committed leadership and qualified board members that subscribe to ethical leadership, sustainability as well as good governance principles. Apart from that, these leaders should not simply concentrate on the improvement of productivity and the increase of revenue. A sustainable business must pay equal attention to the integrity of processes and the quality of products. Furthermore, to achieve excellence, things have to be done correctly and trustworthy over a long period of time. Therefore, compromises in terms of quality standards should never be tolerated or covered up. That is, he continued, how a business culture would deteriorate and bad behaviors get embedded. The tragedy of KPMG’s story, Prof. Nkuhlu concluded, is that it missed these points for too long and in doing so lost a fair amount of its revenue, several partners, many long-term clients, its reputation and over 400 employees. Even though serious measures have been taken, rebuilding and restoring the company still poses a huge challenge.

Prof. Nkuhlu’s keynote address was followed by a Q&A Session, where the audience had the possibility to ask questions. 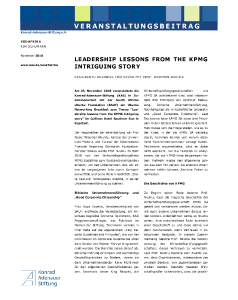