“Local Government Innovation Knowledge Sharing Conference” was the title of a conference, which was held on Tuesday, 11th October 2016 at the Office of the South African Local Government Association (SALGA) in Cape Town. The aim of the conference, funded by the Konrad-Adenauer-Stiftung (KAS) and jointly hosted by the Impumelelo Social Innovation Centre, SALGA and the Institute for Future Research (IFR), was to share knowledge, innovative ideas and best practice examples regarding sustainable Water- and Waste Management Systems between municipalities across South Africa.
November 10, 2016 Ordering Information

Water- and Waste Management are amongst the most important issues of current and future generations. Population Growth increases the global demand for natural resources, energy and consumables. As a consequence more waste is produced and more water gets used. According to the World Counts statistic 50 tons of household waste gets produced every second globally. It is estimated that by the year 2030 the amount of household waste will almost double to 3000 million tons annually. Because of these projections, it is vital to come up with innovative ideas in order to manage Water- and Waste more sustainably and responsibly. The conference demonstrated that some municipalities in South Africa have already developed and implemented such innovative ideas.

One of the speakers at the conference was Hayley McLellan, who works for the Two Ocean Aquarium in Cape Town. Her mission is to ban plastic shopping bags in South Africa. Her campaign ”Rethink the bag” urges ordinary citizens to rethink their shopping behavior and use non-plastic bags as an alternative. In her presentation she demonstrated how harmful plastic shopping bags are for the environment, especially the marine ecosystem. She informed the audience that one plastic bag has an average usage time of 20 minutes but that it takes more than 1000 years to dissolve one. According to McLellan there will be one day more plastic in the ocean than fish if nothing changes.

Another, really inspiring woman and speaker of the day was Pat Feather-stone, who is the director and founder of the non-profit organisation “Soil for Life”. The approach of this project is to help and teach people to create their own sustainable home food gardens, irrespective of how limited their resources are. Although South Africa is officially food secure, more than 14-million people regularly experience hunger. (Hidden Hunger in South Africa, Oxfam 2014) Between 2010 and 2015 2,874 people in low income areas have been taught by Soil for Life how they can live healthier with growing their own vegetables. On average each of the trained individuals is part of a six-headed household which means that the work of Soil for Life has had a positive impact on the lives of more than 17,000 people.

Another NGO named ”Oasis”, which was represented by Beraldine Jagers, aims create employment for intellectually disabled people. Oasis offers a diverse range of projects, such as a bakery, a book shop and a recycling project. The Oasis Recycling project takes an integrated approach to waste management and deals with waste in several different ways with the aim of reducing the amount of waste that ends up in landfills.

All of the showcased projects on Wa-ter- and Waste Management were inspiring and quite diverse in their ap-proach. However, the presenters all shared the same conviction and send the same message to the audience: A sensible and efficient use of natural resources is key to a sustainable and healthy future. Each and every one of us can make a difference and can be the change we want to see. 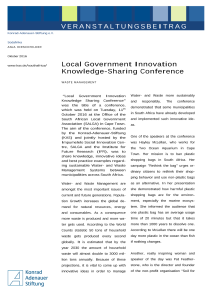