by
The orientation training workshop for traditional leaders was aimed at achieving the second project objective which states that in settling land disputes, traditional authorities increasingly consider the codified law and strengthen the position of women in issues of land use and land ownership. The workshop covered key developments and stages of the land law reform process in Malawi, specific legislations in the new land law that support and safeguard women’s land ownership rights, and the composition, membership eligibility criteria and mandates of the customary land committee.
July 16, 2018 Ordering Information 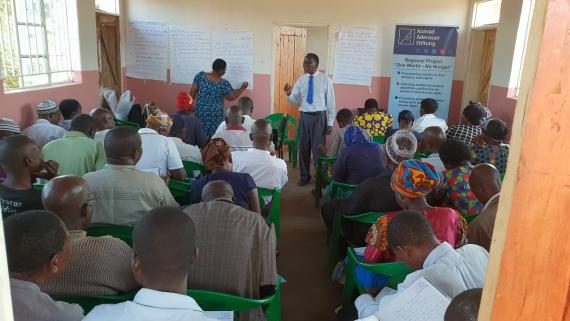 1. Theme of the activity, significance and intended outcome

The theme of the activity was ‘Orientation training workshop for traditional leaders in Zomba’ on the legal (statutory) instruments supporting women’s land rights in Malawi. It was a second workshop in 2018 targeting the lower two tiers in the hierarchy of traditional leadership in Malawi namely Group Village Headmen/Head women (GVHs) and Village Headmen/Head women (VHs) and selected members of the Area Development Committees (ADCs). Apart from traditional leaders, ADCs form part of the political decision oversight structure on customary land allocation for development and other purposes within rural communities.

This training workshop for traditional leaders was significant given that they are custodians of cultural norms and primary authority in customary land allocation and resolution of land disputes. Thus they are a strategic target group. During community awareness outreaches conducted in several villages hitherto, host traditional leaders and those invited from neighbouring villages requested for these workshops to get a fair understanding of the new land law. As an indicator, it is envisaged that this activity will result in significant number of trained traditional leaders who will settle disputes according to codified law.

The intended outcome of the activity was to ultimately ensure that future actions of traditional leaders are within the codified law as mediators and protectors of women’s rights. It was envisaged that this activity would result in significant numbers of trained traditional leaders who will be able to allocate land to women in their own right. It was further anticipated that with this training, traditional leaders would better appreciate how positive aspects of customary and statutory laws can be used to protect and promote land ownership and land use rights of women.

The workshop was running for two full days: 19-20 June 2018. While 45-48 participants were anticipated, a total of 51 participants attended: 33 men and 18 women. All participants came from Sub-Traditional Authority (STA) Nkagula, in Zomba North, comprising GVHs, VHs and ADC members. The Chanco Community radio producer was also in attendance on both days. He recorded workshop proceedings and interviewed workshop participants for sponsored weekly radio programmes as well as news material. Chanco community radio estimates its audience at about 1.5 million listeners from Zomba and surrounding districts including Machinga, Balaka, Mulanje, Phalombe, Chiradzulu and Blantyre. A two-member comedy team from a NASFAM impact area was requested to attend the workshop and present their display on each day on the essence of women’s land rights. Considering the high levels of illiteracy in this area, the comedy enhanced the participants’ understanding on the importance of women’s land rights. On the final day, the STA Nkagula officially closed the workshop.

The workshop was guided by a programme developed beforehand, which was circulated to the participants. The workshop content was mainly delivered through interactive plenary discussions. Participants were free to ask questions and make contributions as each topic was being delivered. The comedy display performance at the end of each day summarized the day’s discussions. The first day also included a group discussion in which participants were asked to recall two case studies on women land rights from their communities and analyzed them in relation to the new land law. On the second day, a 25-minutes session was devoted to a panel discussion to test the level of intake by the participants. The panel comprised a ward councilor from the community, a male and female traditional leader and two community members, male and female. The rest of the participants asked questions on women land rights, and the panel responded. This was one indicator to test the extent to which the principles of women land rights were being understood by the participants.

a) The National Context – Land Matters in Malawi

This topic was particularly relevant in enlightening the participants on the causative issues for the land law review. It presented land pressure due to competing interests in land including fast growing population, land-based investments such as mining, agriculture, forestry, parks and wildlife, urban growth, e.t.c, against an inelastic supply of land. It discussed land administration challenges where traditional authorities are formally recognized as having the right to control the use and allocation of customary land within their jurisdictions and below them the village leaders are given the power to allocate unused land. The presentation finally zeroed in on the pivotal role of tenure security in achieving right to adequate food, including the right of freedom from hunger and how it impacts on other rights such as the right of everyone to an adequate standard of livelihood for a family.

b) Historical background of land law review in Malawi

Mr. Mlaka illustrated how the present land law and policy in Malawi is traced through the formal colonial declarations of British authority over Central Africa of 1889, 1892 and 1893 and how as a result, the natives lost ownership and control of land under the ambit of certificates of claim and the fiction that all land was vested in the British Monarch. He also brought the discussion through the era of the first President of the Republic of Malawi (Dr. Hastings Kamuzu Banda) and how laws under independent Malawi were still designed in a manner that alienated land from the customary land owners. Then he zeroed in on processes the country has gone through to reform the land sector culminating in the passage of a new legislative framework in 2016 which is pro-poor and gender sensitive to a large extent.

This presentation sought to orient the participants on the new land laws (passed by Parliament in 2016), especially the Customary Land Act and the Land Acquisition (Amendment) Act. The approach was that in plenary, participants would identify some provisions or processes in the outgoing land law and the facilitator would explain how that has changed under the new land law. For instance, land ownership by women where the old law gave way to customs and traditions to prevail over legislation and constitution in terms of male dominance. The new land law does not only provide equal opportunities but has specific provisions solely aimed at protecting women and children from land dispossession. Another example was the State take-over of customary land for development or other investment. The outgoing law only compensated for fixed developments on the land, while the new land law has an extensive list of criteria for compensation, thus realigning it with international standards on land dispossession. Significantly, the Customary Land Act (2016) allows the creation of Customary Estates, so that smallholder farmers in Traditional Land Management Areas (TLMAs) can get legal title to their land and thus be protected from encroachment and other interests including those of Traditional Authorities. Other key changes to the advantage of the smallholder farmer include that all citizens, especially smallholders on customary land, should have clear title to land that can be registered at a decentralized District Land Registry and that Traditional Land Management Areas be demarcated to allow customary landholders – whether an individual, a family, or a group – to register their land as a customary estate, a departure from the outgoing law that prohibited this.

Participants got excited at the provisions that allowed participation of grassroots in land administration through democratically elected committees whose members should be gender balanced. The establishment of local structures (customary land tribunals) for land dispute settlement was viewed as a major break-through since land complaints were heavily stagnating at magistrate courts for years, thus depriving the disputing parties an opportunity to have access to adequate food and be free from hunger.

The discussion sensitized participants on a number of gender related provisions and their implication, some of which are:

• The fact that the law provides for equal gender representation on the Customary Land Committees for land administration does not resolve the customary challenge of the deeply entrenched negative attitude towards women- the mentality of men where tradition has taught them that women are only good for labour and reproduction. Therefore, women should be capacitated and their confidence enhanced so as to choose women of influence, especially in patriarchal society where a woman is considered disrespectful if she speaks opposing men’s views in presence of a chief.

• The inclusion of women in land tribunals. However, participants were advised to watch the implementation of this provision given that it provides for members to the tribunal to be nominated by the Traditional Authority and not elected.

• The Customary Land Act 2016 also provides the freedom for families to register either as individual citizens, or as a family of citizens. It does not make joint registration mandatory for couples. The risk is again the negative attitudes against women that may result in most land being registered in men’s names. Women forums have to be vigilant to influence inclusion on land registration.

• The new land law, however, demands that land committees should treat an application from a woman or a group of women, a person with disability or a group of persons with disability no less favorably than an equivalent application from a man, a group of men or a mixed group of men and women. This raises the urgent need for training of the land committees to understand why gender discrimination is illegal.

• The Customary Land Act (2016) also protects women where it provides that “A surrender under this section which has, or for which it is reasonable to deduce that its purpose or effect is to deprive, or place impediment in the way of a woman from occupying land which she would, but for that surrender of land, be entitled to occupy under Customary Law or otherwise shall not be a valid surrender”. No such provision exists in the law for men, signifying the assertiveness of the law on gender matters.

The facilitator also commended the new land law in that it recognizes and promotes the right of women to own land in their own right and to hold leadership positions in land matters. Further, by registering customary estates as private land, the land would have more value and spouses and children would be better protected from land grabbing when deceased.

Plenary discussions were mostly dominated by questions for clarification. The questions served as an indicator confirming that the training material was understood. Some of the questions were:

•The elected land committee members are chaired by unelected traditional leader whose position is hereditary. What would happen if it is the traditional leader (the chair) who brings confusion or corruption in land administration? Who has the power to remove him/her?

• The new land law provides that where the Minister intends to transfer any customary land in a TLMA to Government or reserve land for public interest (including investments of national interest), he may direct the Commissioner to proceed in accordance with the provisions of this law. Does the holder of a customary estate whose land is being taken away have the liberty to refuse?

• If average landholding in Malawi is around 0.5ha, how would large-scale land based investments find land?

• If under matrilineal society a man marries and settles in the wife’s homestead on family land and the woman dies, the law says the land remains the property of the surviving spouse and children. Now suppose the man remarries, can he bring the new wife on the family land that belonged to the deceased family clan? 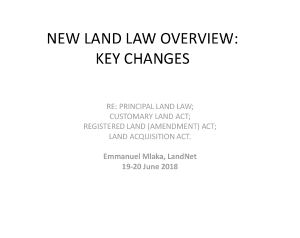 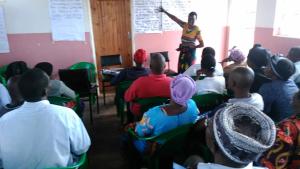 Group presentations in plenary by a lady Chief 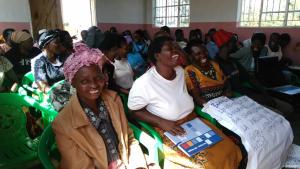 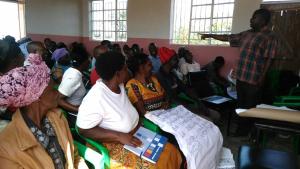