On 18 and 19 September 2018, another workshop for traditional leaders took place in Mabilabo (Mzimba, Malawi). For two days, 60 participants were introduced to the new land law in Malawi. The workshop was financed by KAS and conducted in cooperation with the organisation partner National Association of Smallholder Farmers of Malawi (NASFAM) and Emmanuel Mlaka, Land Governance Expert at LandNet Malawi. The workshop was also accompanied by Mzimba Community Radio.
October 10, 2018 Ordering Information

Mr. Mlaka from Landnet speaking to participants at the Orientation training workshop for traditional leaders from Traditional Authority Mabilabo in Mzimba 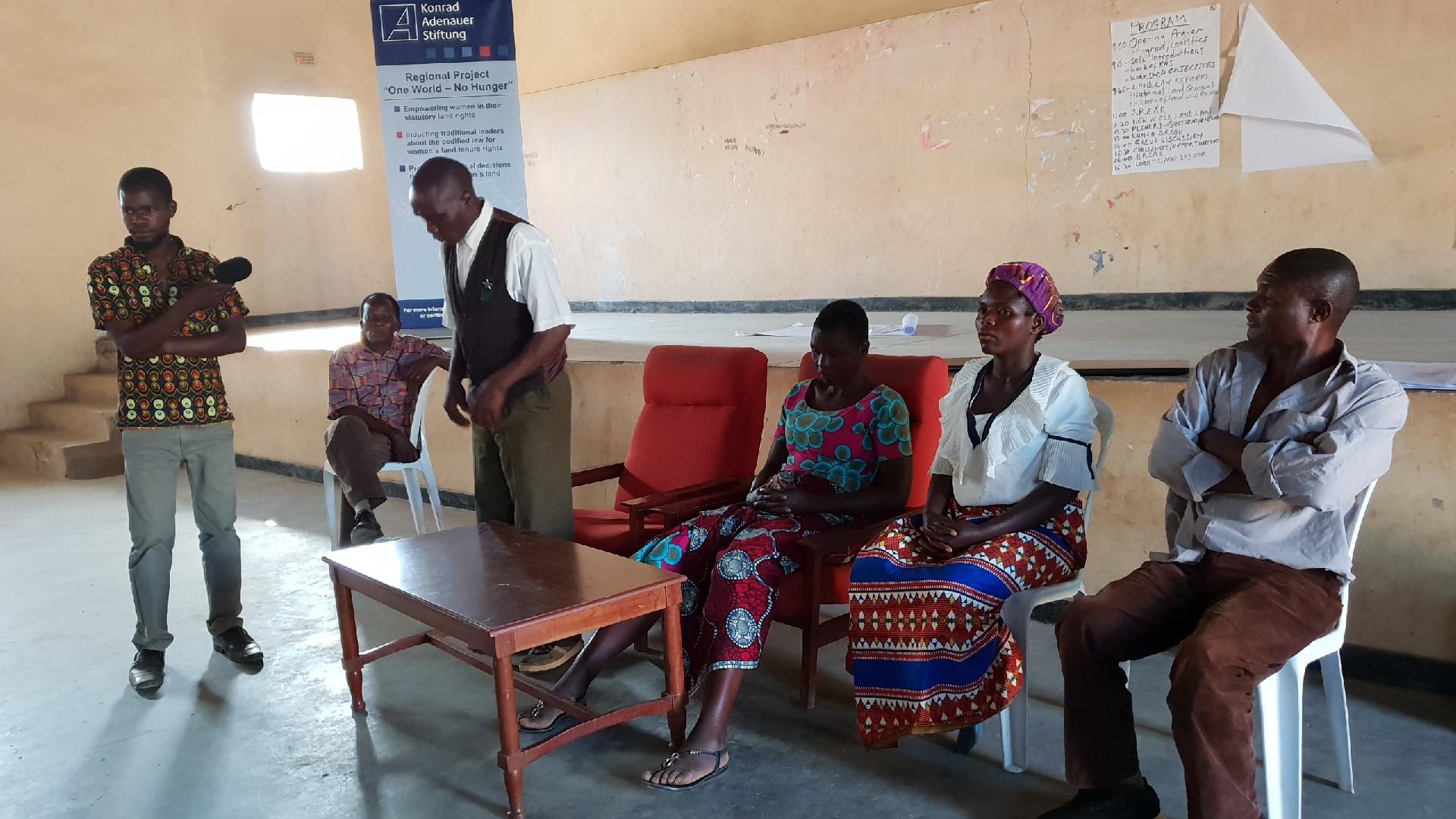 Mzimba community radio recording a panel discussion at the workshop

The participants of the traditional leaders' orientation training workshop in Mzimba 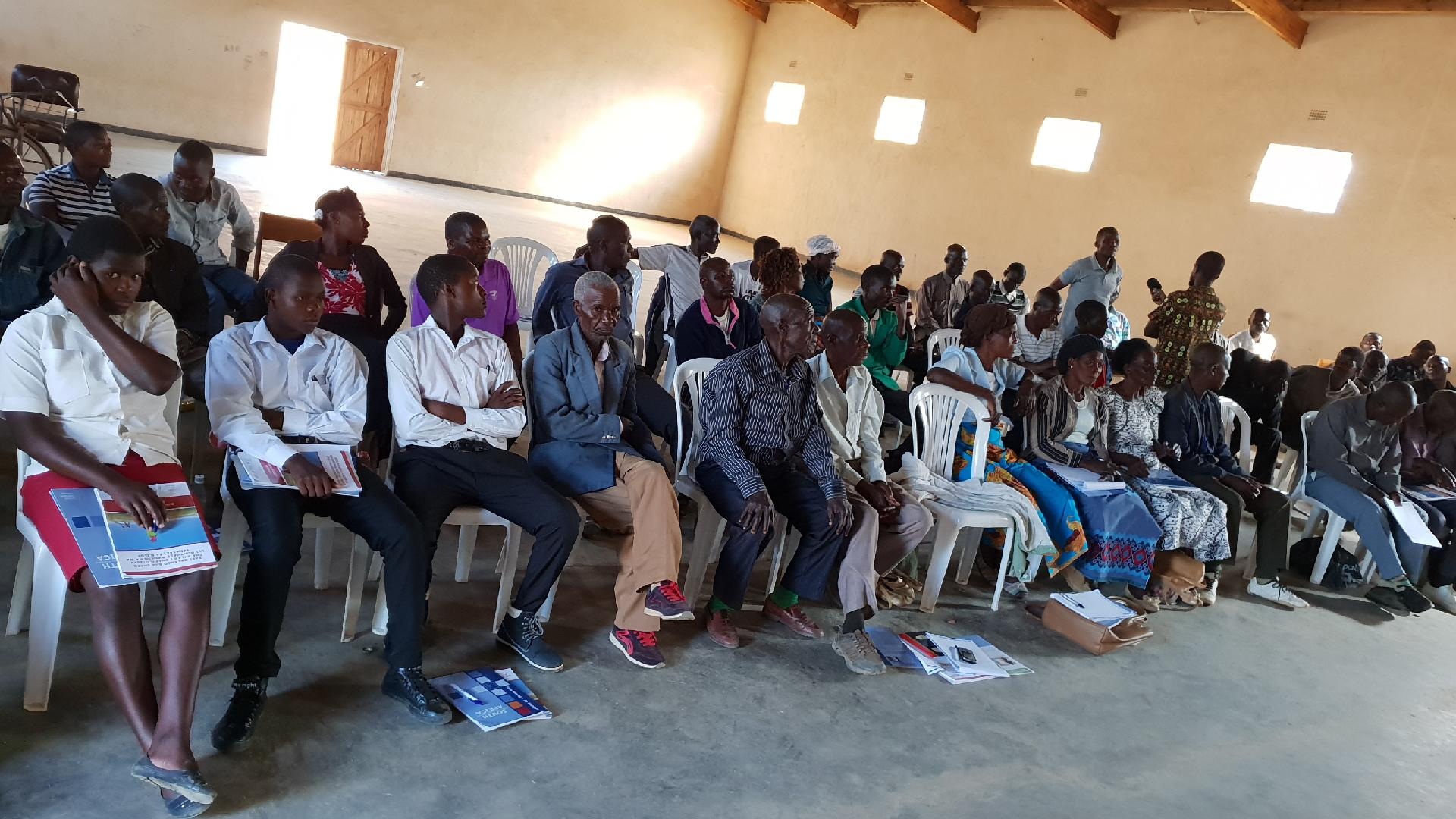 The training for traditional leaders was aimed to ensuring that traditional authorities increasingly consider the codified law and strengthen the position of women in issues of land use and land ownership. In its scope it was intended to cover key stages of the land law reform process in Malawi and how the new land law supports women’s land ownership rights.

The workshop was significant as traditional leaders directly deal with issues of land allocation at the community level. As power bearers and primary authority, they are a strategic target in customary land allocation and resolution of land disputes. The intended outcome was to ensure that future actions of traditional leaders are within the codified law as protectors of women’s rights.

The training workshop was fully financed by KAS. In collaboration with KAS, the main organising partner was the National Association of Smallholder Farmers of Malawi (NASFAM). LandNet provided the services of its land governance expert, Mr. Emmanuel Mlaka, to be the main workshop facilitator. The Mzimba Community Radio producer was present to record workshop proceedings and interview participants for the weekly radio programmes.

The workshop which took place in Elangeni Secondary School hall at Emfeni ran for two full days. 60 participants attended, whereby 8 of the participants were female. Targeting Mzimba district is very strategic considering that this patriarchal society does not recognise the separate right of a woman to own and hold land in her own right.

The training content was delivered through interactive plenary discussions, group and panel discussions. Participants were free to contribute what they already knew and ask questions as each topic was delivered. The workshop covered five main session topics. The first day included a group discussion in which participants were asked to recall one case study on women land rights from their communities which occurred before the new land law and analyzed them in relation to the new land law. The groups discussed an extractive industry case in the nearby community which happened before the new land law became effective. The community was barred from any land activity including farming pending relocation to a place not yet mentioned for five years and in the end the mining company that had dug a lot of holes in the ground and extracted tons and tons of mineral “samples” declared they would not continue with mining. Under the old land law both the government and the investor refused to compensate for any disturbance and loss of livelihoods sources. The community is bitter against the state. The greatest impact was high household food insecurity which in turn affected the health and nutrition of family members including children.

The National Context – Land Matters in Malawi. This topic gave an overview on land pressure due to competing interests on land. It discussed land administration challenges where traditional authorities are formally recognized as having the right to control the use and allocation of customary land within their jurisdictions. The presentation also covered weaknesses that existed in the old land law, especially how it marginalized women and orphans resulting in landlessness and inequalities in land access to the poor. It also related to initiatives for eradication of hunger and poverty which depend largely on access to land and natural resources.

Historical background of land law review: It illustrated how the present land law and policy in Malawi is traced through the formal declarations of British authority over Central Africa and how as a result, the natives lost ownership and control of land under the ambit of certificates of claim and the fiction that all land was vested in the British Monarch. The session zeroed in on processes the country has gone through to reform the land sector resulting in the passage of new legislations in 2016.

A summary of key changes in the new land related laws. This presentation sought to orient participants on the new land laws (passed by Parliament in 2016), especially the Customary Land Act as operationalized in March 2018 and the Land Acquisition (Amendment) Act. The two Acts are presented in conjunction with older Acts that have a bearing to the Customary Land Act. Different from the previous workshops, this target group had some participants who had at least attended other workshops on same and were mostly interested in the finer details of decentralized land administration.

Participants got excited at the provisions that allowed participation of grassroots in land administration through democratically elected committees whose members should be gender balanced. However, the facilitator updated participants that, as at the date of this workshop, demarcation and adjudication of Traditional Land Management Areas (TLMAs) had been completed by the government in all districts of the country except Mzimba district. Mzimba was left out due to the objection raised by Paramount Chief Mbelwa for against the implementation of the new land law arguing about the new law being in conflict with patriarchal customs on customary land ownership rights in Mzimba.

Gender inclusive provisions in the new land law. The fact that the law provides for equal gender representation does not resolve the customary challenge of a deeply entrenched negative mentality of men that women are only good for labour and reproduction. Therefore, women should be capacitated and their confidence enhanced to choose women of influence. The new land law promotes the right of women to own land and to hold leadership positions in land matters.

Monitoring was done at two levels. The first level was when on the second day, within a panel discussion the level of participants’ understanding of the content was tested. The second level was when the facilitator reintroduced the list of the participants’ fears, which they had put forward on the first day during pre-workshop assessment session.

The presentations contained clarifications around their fears. At the end of the workshop, the facilitator asked questions around the above fears and they correctly answered their own questions, an indicator that they now had answers to most of their fears.

Actual workshop outcomes can only be observed in the medium term when decisions of traditional leaders start making decisions on land matters with absolute consideration of the new land law. However, the following results were notable:

The extension of the number of days for leaders workshop from one to two gave opportunity to facilitators to clearly respond to deeper questions communities had. There were more traditional leaders under this T/A, who could not be accommodated in this one workshop. Participants strongly recommended that more such workshops be conducted for the others and include more community awareness meetings.