National and Provincial Elections on May 8th 2019

On the 25th of April 2019, the Konrad-Adenauer-Stiftung (KAS), the South African Research Chairs Initiative (SARChl), the Dullah Omar Institute, and the University of the Western Cape’s (UWC) Department of Political Studies hosted an international conference with four panel discussions focusing on key questions in the upcoming elections. The event was part of a discussion series on Good Governance, Local Governance, and Human Rights.
May 7, 2019 Ordering Information 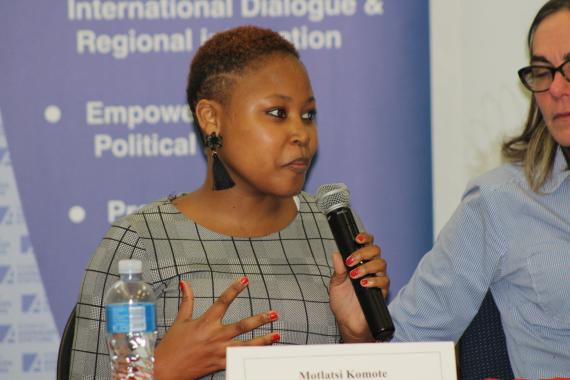 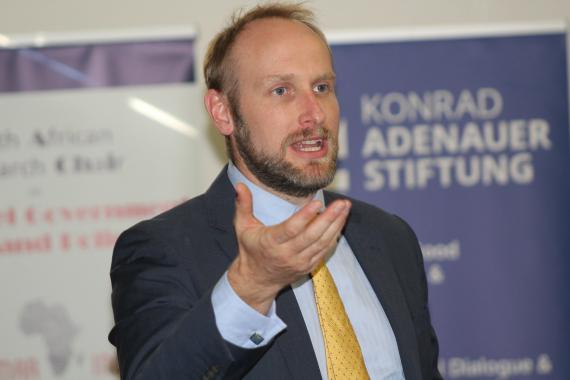 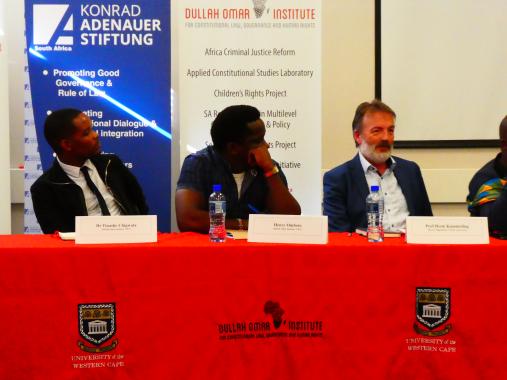 National and Provincial Elections on May 8th 2019: Key questions

On the 25th of April 2019, the Konrad-Adenauer-Stiftung (KAS), the South African Research Chairs Initiative (SARChl), the Dullah Omar Institute, and the University of the Western Cape’s (UWC) Department of Political Studies hosted an international conference with four panel discussions focusing on key questions in the upcoming elections. The event was part of a discussion series on Good Governance, Local Governance, and Human Rights.

Each of the panels featured prominent experts from the field, enabling an international comparative perspective on key questions in the South African National Elections.

The Politics of Populism

The first panel, chaired by UWC Professor Cherrel Africa, focused on populist movements in politics, including a reflection on South Africa.

Professor Xavier Philippe from the University of Paris I (Panthéon-Sorbonne) introduced a European and international perspective of populism. He depicted this political strategy emphasizes an “us versus the others”-approach, vilifying elites and all opposition by claiming to be the “only true voice of the actual people”. Populists state that they exclusively represent the will of the people, in face of an abusive system and abusive politics.

Contrary to common belief, populist politics is not a temporary movement but can generate long-term governments. Philippe warned that the aim of populist parties was first to gain power through representative multiparty democracy but then to permanently retain power by erasing it. Populist parties disguise their aims through the use of democratic language and by not committing to particular ideologies and should not be underestimated. These parties are authoritarian in nature once in government though they appear democratic. This appearance is generated by maintaining democratic institutions but reconstituting their personnel, thus in reality, erasing their democratic function. Populist parties will capture all centers of power of society (be they political, economic or civil) in the name of the people and then control them centrally from the party. The challenge in fighting populist parties is that they draw strength from being rejected. They can only be successfully corralled by engaging with them on the plane of ideas and bringing their aims to light.

Ebrahim Fakir, the director of programmes at Auwal Socio-Economic Research Institute (ASRI) later added that a populist parties differ from popular parties in four aspects: 1) their use of unmediated claims based solely on belief, 2) being unthoughtful, 3) being evidence-insensitive and 4) not being orientated to solutions, rather being focused solely on rhetorical devices. Populists’ methods have become globally represented in politics. In Fakir’s view, all South African parties are populist in character and language. An engaged discussion with the audience followed these contributions.

The next panel stressed the provincial dimension of this year’s elections. It raised the question of whether provincial outcomes serve as a proxy for the national vote or if there are material differences. After a brief introduction by the chair, UWC professor Nico Steytler, Professor Cherrel Africa elaborated on factors influencing voters’ behavior. She explained that political developments on the national level are observed by voters and will trickle down to regional and local election outcomes. One of the main reasons for the difference in the political landscape of the Western Cape compared to other provinces is the lesser degree of party identification. Voters in the Western Cape thus have shown themselves capable of punishing political shortcomings.

Fakir then underlined the provincial dynamics of South African national elections. The Democratic Alliance (DA) and the Economic Freedom Fighters (EFF) win the vast majority of their votes out of only four respective stronghold provinces. This raises the question whether these national parties should rather be classified as regional. On the other hand, the influence of provincial party politics should not be neglected as they put critical regional issues at the political forefront. Fakir unpacked the provincial dynamic by reviewing the electoral predictions of Gauteng, the Western Cape, and KwaZulu-Natal. The panel was followed by interesting remarks from the audiences, for example questioning whether provincial and national elections should be held on different days to reduce “block voting”, in which provincial and national voter choices are conflated.

Womxn’s Agenda in the 2019 Elections

After the lunch break, Professor Jaap de Visser (Dullah Omar Institute) chaired the third panel, which discussed the status of womxn agendas of political parties in the elections. The word "womxn" in this case is used as an non-exclusive term that is not gender normative and refers to all forms of female identity and sexuality. The round of speakers comprised Professor Amanda Gouws from the University of Stellenbosch, Samantha Waterhouse and Molatsi Komote, both from the Women and Democracy Initiative at the Dullah Omar Institute.

Komote acquainted the audience with some empirical data revealing strong inequalities between men and women on a variety of social indicators. This is especially true for black and colored women in comparison to whites. Across all provinces, black and colored women are more likely to suffer from food poverty and sexual violence and own less land. Her conclusion was that development outcomes are strongly gendered in South Africa, thus making the case that gender should play a role in the national political debate.

Professor Gouws then analyzed the political parties’ responses to these realities. She came to the sobering conclusion that while females are brought into political position through e.g. zebra-lists[1] (EFF), feminist policies are still vastly missing throughout the party manifestos. In her opinion, the EFF manifesto fares better than those of its competitors but still lacks a realistically achievable plan. Quotas are not enough to challenge deeply systematic inequalities caused by structures in religion or capitalism. After all, a female politician is not necessarily a feminist politician, who would be characterized by the challenging gender structures in politics.

The last panel of the afternoon asked the critical question of the credibility of electoral outcomes when using electronic systems in the voting process. Chaired by Nkosikhulule Nyembezi, who is also the Chairperson of the Election Monitoring Network, the panelists looked at the track record of e-elections using international perspectives.

Professor Henk Kummerling, the former Chairperson of the Netherlands Electoral Commission and the Rector Magnificus at Utrecht University, named public trust in the electoral commission as one of the major factors permitting the successful adoption of e-voting measures. After decades of electronic voting, the Netherland abolished it due to public concern in the transparency of the system and the secrecy of the ballots. Kummerling therefore advised that electronic measures should be adopted through a gradual and slow process in order to maintain public trust in the system.

Henry Omboto and Dr. Tinashe Chigwata, both from the Dullah Omar Institute, then illustrated abuses of e-elections in the recent elections in Kenya and Zimbabwe. The countries made use of electronic result transmission procedures but also utilized hard copy safeguards. However, inconsistencies between hard copy forms and the e-transmitted results led to allegations of electoral fraud in both the 2017 Kenyan elections and the 2018 Zimbabwean elections. While in Zimbabwe the disputed results were accepted, the Kenyan elections were nullified by the Kenyan Supreme Court.

The last speaker of the day was Reverend Courtney Sampson, the head of Western Cape Independent Electoral Commission (IEC). He believes that suspicion in e-elections and electoral commissions in general is healthy and furthermore needed for consistent self-evaluation of the institutions. As of right now, the digital divide in South Africa is still too severe to introduce electronic or internet voting. However, since we can order food, make financial transactions or buy clothes with just a few taps on our smartphones, the question of how this can be made possible for elections will occur in the future. Sampson then concluded that transparency is an electoral commission’s greatest defense against suspicion and distrust from the public.

Christiaan Endres from the Konrad-Adenauer-Stiftung concluded the event by thanking the audience and speakers, and remarking on the importance of exchanges and debates in forums like these as they strengthen critical analysis, political pluralism and democratic governance in South Africa. 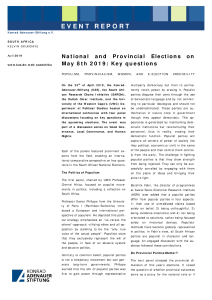 National and Provincial Elections of 8 May 2019: Key questions