DEMOCRACY WORKBOOK - A Resource for Civic Education in Uganda

A Project by KAS and GAIN-Uganda 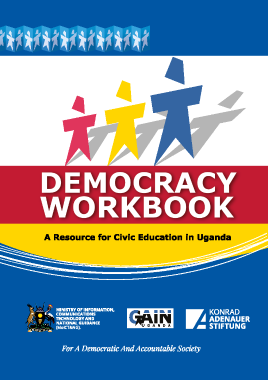 Between 2011 and 2013, the Konrad-Adenauer-Stiftung (KAS) in cooperation with Action for Development (ACFODE) implemented the European Union co-financed project “Action for Strengthening Good Governance and Accountability in Uganda”. The project was implemented in eleven Ugandan districts. Among the outcomes of the project was the successful establishment of a network of local civil society organisations active in the areas of democracy, good governance, and human rights.

In 2014, KAS worked together with the member organisations of the network in order to establish a Memorandum of Understanding, which was signed by representatives of 18 member organisations (MOs), as well as to draft a strategic plan for the network. Furthermore, the network rebranded itself and is now officially called ‘Governance and Accountability Inter-District CSO Network Uganda’ – or in short: GAIN-Uganda. 2015 saw several important developments, such as the official registration of the network and the first up-country civic education activities. One of the major milestones that GAIN has achieved since its registration in 2015 is the development of civic education materials that have been used to aid trainings in over 13 districts of Uganda reaching more than 5000 local leaders at the district and sub-county levels. Last year, the Ministry of ICT and National Guidance approached KAS and GAIN-Uganda to partner in promoting the civic education materials. As a result, an agreement was reached among the three partners (GAIN Uganda, MICT&NG and KAS) giving mandate to all the partners to use the materials in promoting civic education in Uganda. The materials are simple and easy to use across board. Since its official launch in 2016, the Democracy workbook has become an important resource in facilitating civic education trainings by state and non-actors.

The Democracy workbook represents a valuable source in transmitting key messages of democracy and civic education in a transparent, vivid and informative way. It includes the main principles of a democratic system, good governance, and human rights, focusing on the understanding of democratic developments and implementing participatory strategies in community, leadership and family. Besides gaining information and learning about strategic democratic tools, the reader is confronted with questions of reflection and discussion such as How are decisions made in your family and in your community? Do you think people have equal opportunities to participate? What are the factors that can stop people from participating? Check out further material of the Democracy Workbook here.

With the growing demand for civic education among different actors at national and local level, GAIN Uganda continues to expand its reach with the basic training of local citizens on their responsibilities to their country and their country to them. Over the last three years GAIN Uganda has trained over 9000 local leaders and citizens on participation, accountability, citizenship, access to information among other topical areas. This has in return contributed to increased citizen participation in the local development issues of their areas. GAIN Uganda being one of the major promoters of civic education, there were engagements with the Electoral Commission on the implications of the EC roadmap 2021 on civil society as well as knitting a way forward on how to work together to promote civic engagement ahead of the next election cycle.


September to October 2019 | Regional Dialogue for CSOs, and Local Leaders in Northern Region in Gulu in Cooperation with GAIN member organisations in the north.

The regional Dialogue for northern Uganda majorly focused on themes of Electoral Democracy and Accountability at Local government levels. The event was also used to conduct the official regional launch of the Democracy Handbook. The dialogue was primarily targeting representatives of CSOs leaders, cultural and religious leaders and Local government Leaders including the academia. Participants were drawn from four districts of northern Uganda, namely; Gulu, Arua, Pader and Lira.

Mbarara, Mbale and Masaka also hosted regional dialogues where they discussed different regional issues that were agreed upon by the stakeholders in the respective districts. Overall, the issues were around accountability, elections, and participation.

Between July and October, all the 13 districts conducted grassroots engagement with the citizens and local leaders in all the regions. This was the third edition of the trainings and it was evident that the communities are the grassroots are yearning to know more about how they can make a contribution to better governance of their communities. The democracy workbook is the basis for these trainings and has become of the guiding manuals for the leaders. The workbook is translated in 6 local languages covering the major languages spoken across the regions including Luganda, Ateso, Runyakitara, Lugbar, Langi, Acholi and Ateso.

GAIN Uganda Members used this occasion to plan for the upcoming phase of grassroots trainings and regional dialogues. Key matters were Commercialisation of electoral politics and what citizens can do to curb it, Enhancing civic engagement at the grassroots, and the Discussion and Planning of the Regional Dialogues. Participants were registered members of all the member organisations that form GAIN Uganda in 13 districts of Uganda. 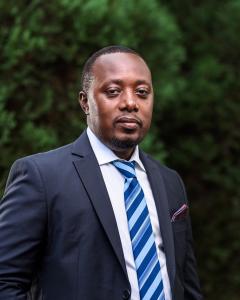 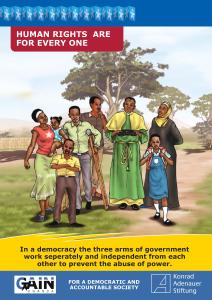