The report is an outcome of an assessment conducted in 11 districts in Uganda namely: Kiboga and Masaka in the central region, Jinja, Palisa, and Soroti in the eastern region, Arua, Lira, and Pader in the northern region, and Kabale, Kisoro, and Mbarara in the western region. It was designed to monitor and measure the state of governance in the selected districts and inform major stakeholders about key trends and needed interventions.

The assessment established a general improvement of democratic trends in the districts which, however, tend to be overshadowed by prevailing gaps. Among the positive developments pointed out are the general elections that enlist high level of citizen participation, the presence of frameworks for citizen engagement in the decision making including in the district planning processes, as well as the increasing opportunities for participation of women and young adults. The following issues are however identified as requiring urgent improvement

•Limited awareness of local citizens of their power and the extent of this power in the democratic system, limiting their ability to exercise it in promoting and demanding particularly democratic practice and accountability. Citizens are not fully confident to demand accountability from their leaders.

•The disconnection between elected leaders and citizens leading to a lack of continuous consultation and feedback between the electorate and their democratic representatives.

•Limited transparency in decision making including the allocation of the already limited resources within the districts.

•The failure to hold elections for lower local councils which has made them ineffective, illegitimate thereby curtailing a key channel to grassroots democratic participation.

•Unlevel political playing especially to the disadvantage of the political opposition. Local authorities in several ways limit activities of the opposition down to the grassroots.

•Limited levels of identification with public affairs and ownership of public resources at the level of citizens as well as a culture where corruption is generally tolerated by stakeholders including citizens.

•Limited channels of access to information on the part of citizens

In line with the above findings, the following are some of the key recommendations from the assessment:

•Civic education can no longer continue to be a sporadic endeavour usually targeted around election times. The several calls that have been made for continuous civic education should be heeded. This intervention needs to be targeted towards elected leaders in as much the same way as it will address local citizens. While civil society organisations can continue to play a strong role in this regard, it is important that the Uganda Human Rights Commission in fulfilment of its constitutional mandate takes lead as the front runner in carrying out civic education.

•The long-existing demand to hold elections for lower local councils needs to be met. The units offer the governance platforms closest to most Ugandans and are thus a key avenue for democratic participation. The lower councils also arbitrate in several conflicts in communities. Because their elections have not been conducted for the last two electoral cycles – existing office bearers are generally illegitimate and less effective.

•Local authorities in the districts, sub counties and villages need to demonstrate a better appreciation of the pluralistic political system Uganda is currently governed by. In particular they need to desist from unnecessary limitations on the free operation of political parties and other legal associations that have the interest to engage in a public discourse on political topics. Public institutions can not act partisan in a multiparty setting.

•The close interconnection between the state and politics needs to be addressed. There still are, within the districts several public officers who act as if they represent the ruling party. Their actions have been reported to curtail free political competition.

•Budget limitations withstanding, elected leaders in the districts need to come up with innovative ways to improve contacts with citizens. The idea of a public accountability day at district and other lower levels presents some of the initiatives that can be considered. This initiative has already been taken up in Kiboga district.

•There is need for a strong public education to promote zero tolerance to corruption. Citizens also need to identify more with public affairs and hold ownership of public resources. 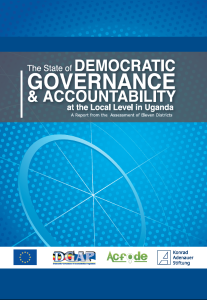