The political environment in Uganda and strategic alliance building were just two of the issues that were discussed at the capacity building workshop for member organisations (MOs) of the Governance and Accountability Inter-District CSO Network Uganda (GAIN-Uganda). The workshop took place from 1st to 4th of July 2015 and brought together one representative of each MO.
July 10, 2015 Ordering Information 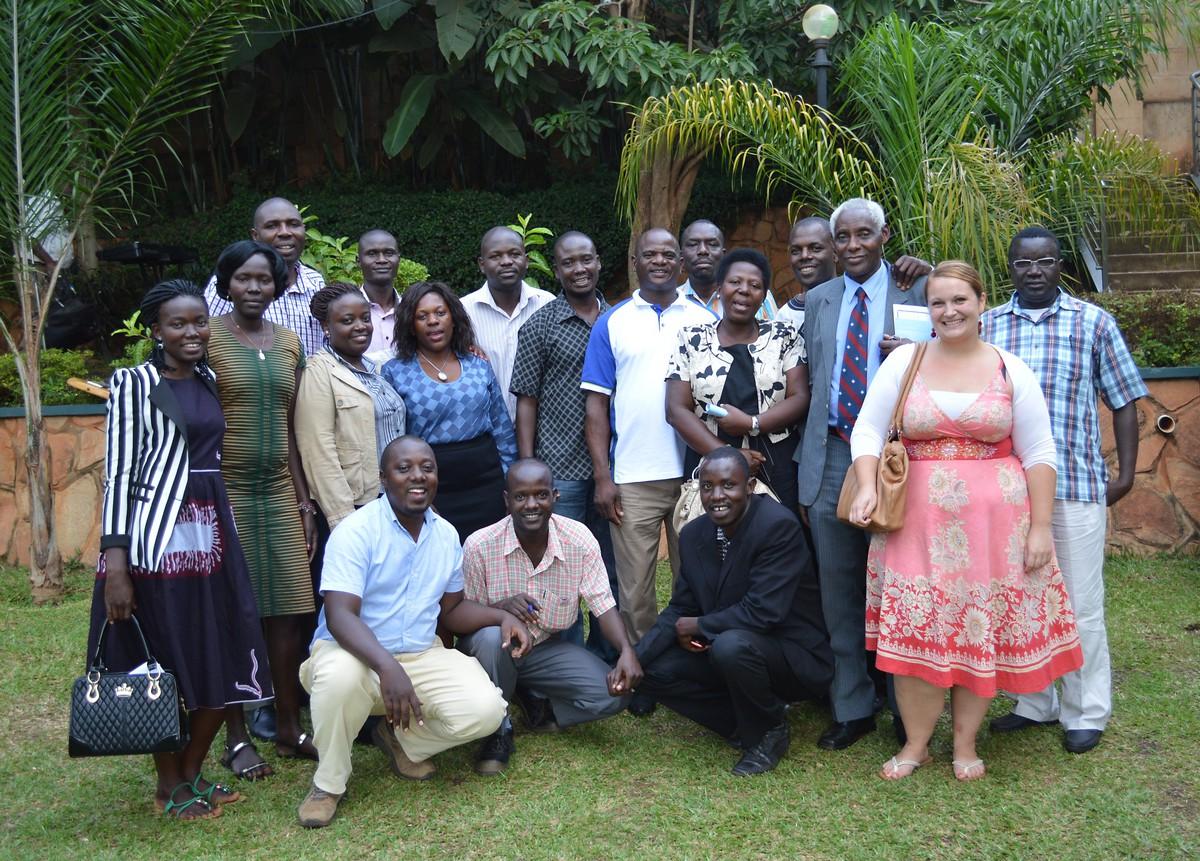 The representatives of GAIN-Uganda member organisations with the secretariat, which is currently hosted by KAS. 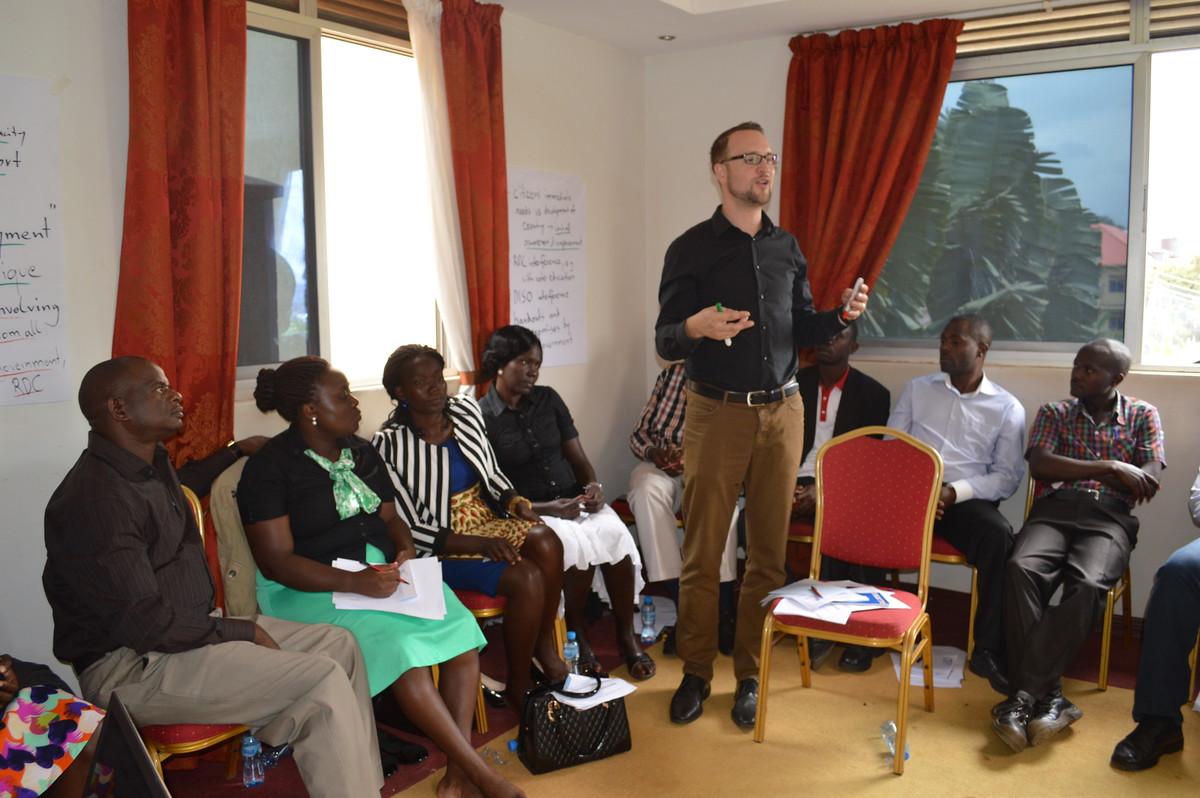 Mathias Kamp engages the participants in discussion about the current political climate in Uganda. 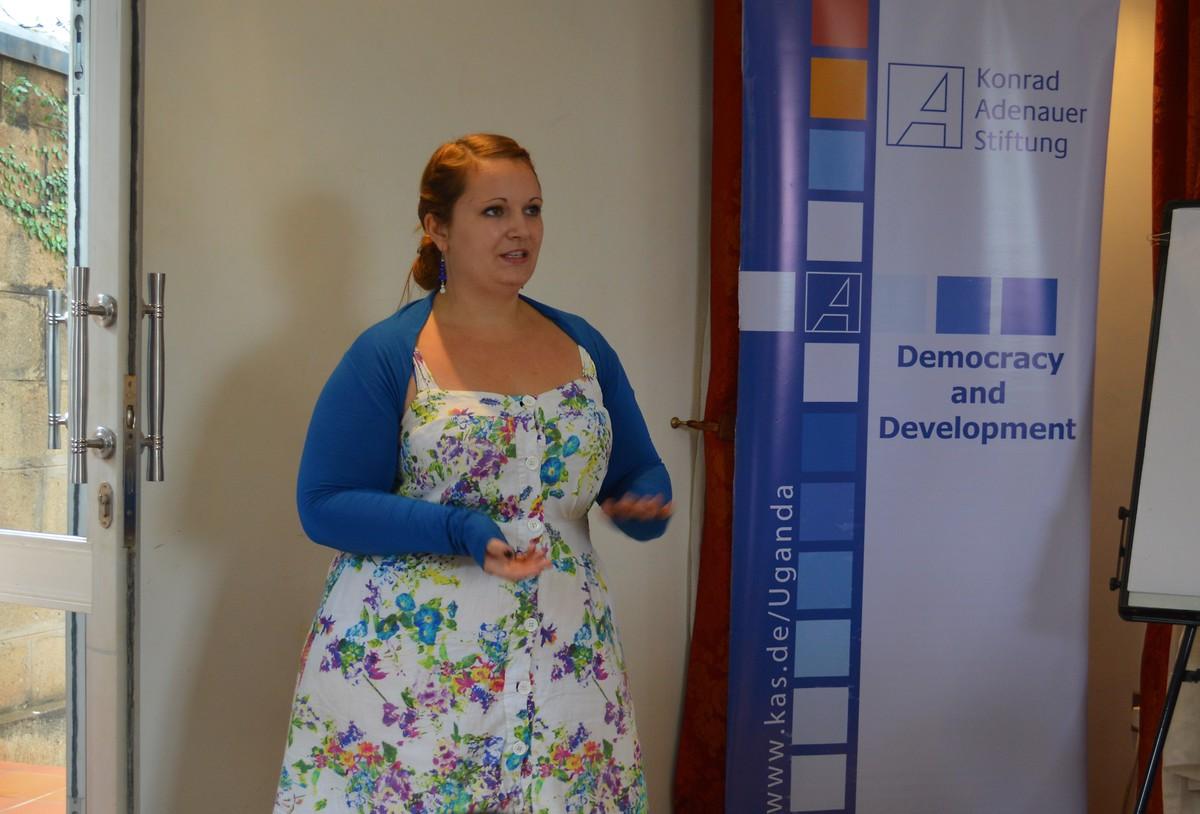 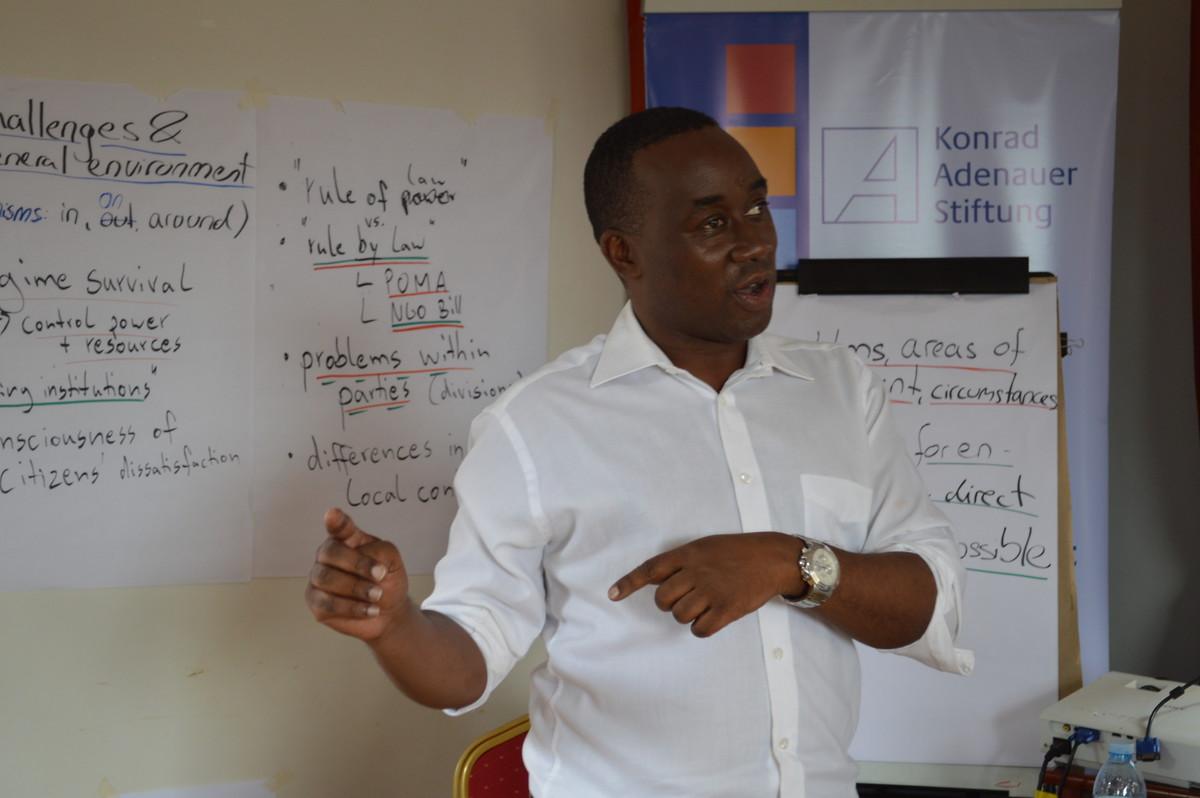 Awel Uwihanganye holds the session on the important issue of strategic alliance building. 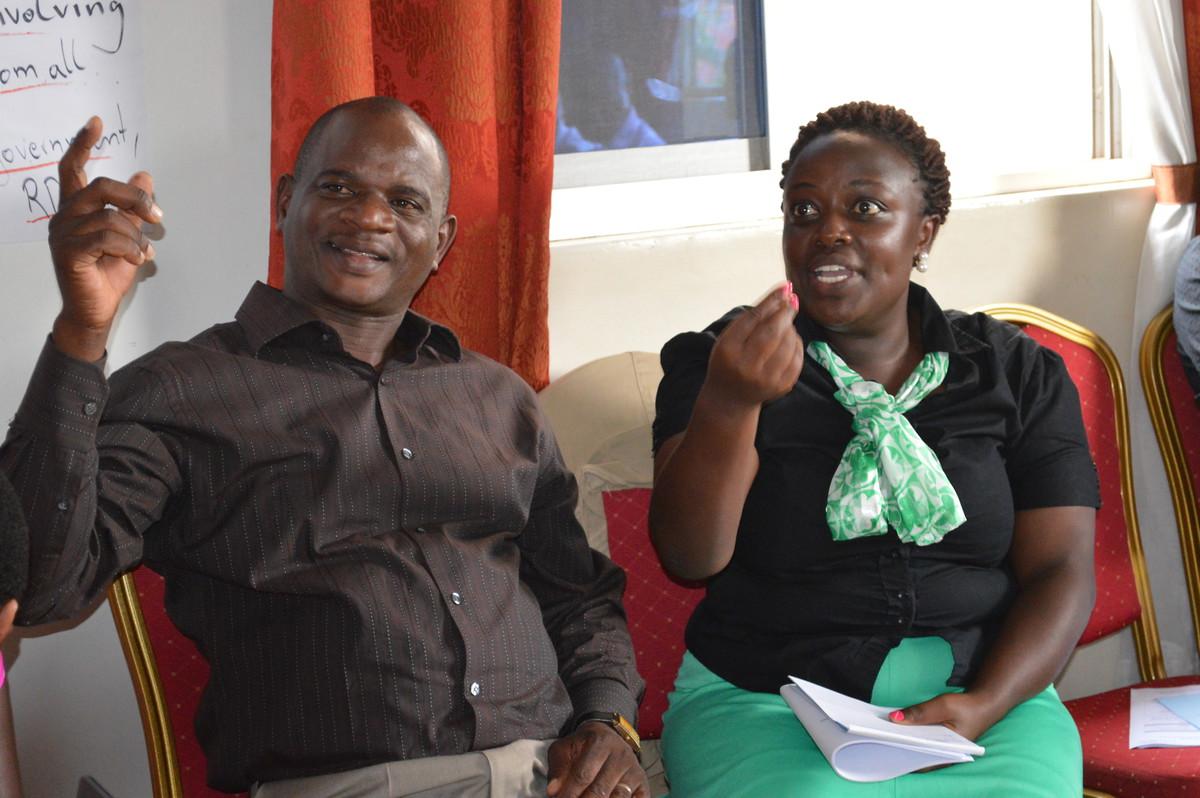 The participants engage actively in the numerous discussions. 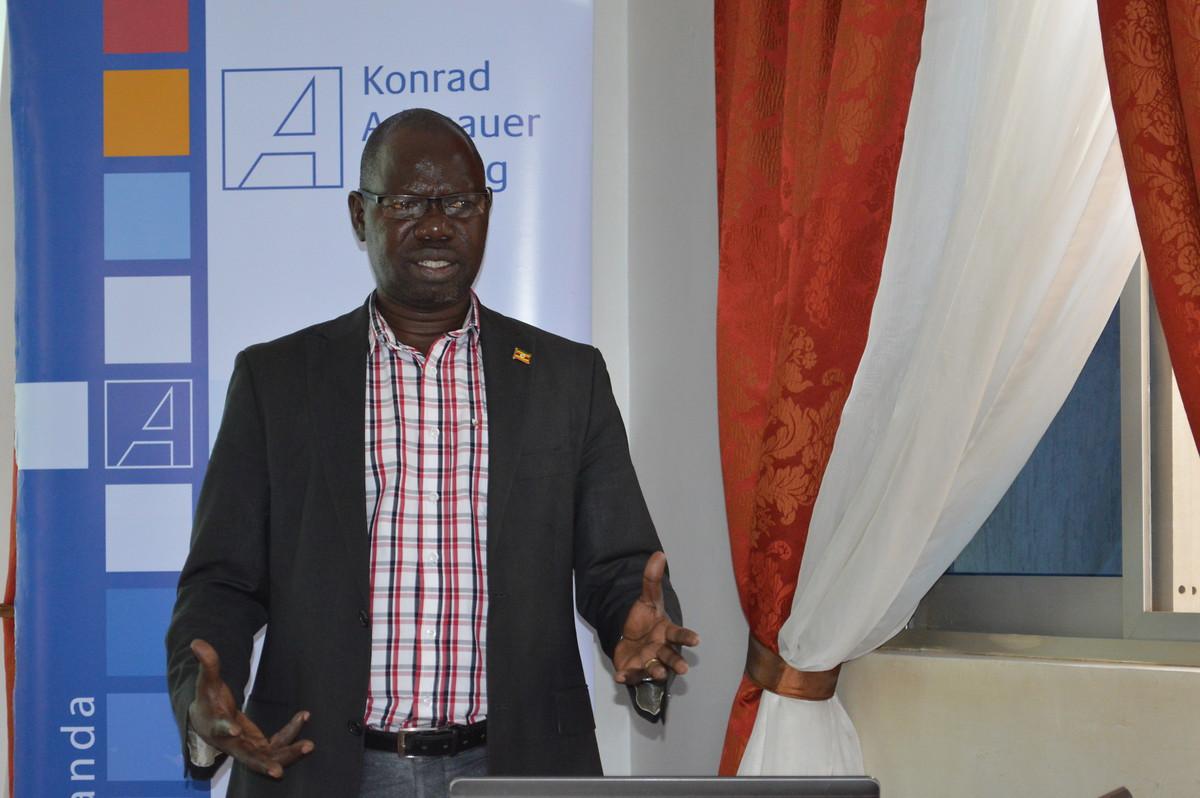 Lyandro Komakech, Refugee Law Project, gives insights into the planning and implementation of advocacy in a politically sensitive environments. 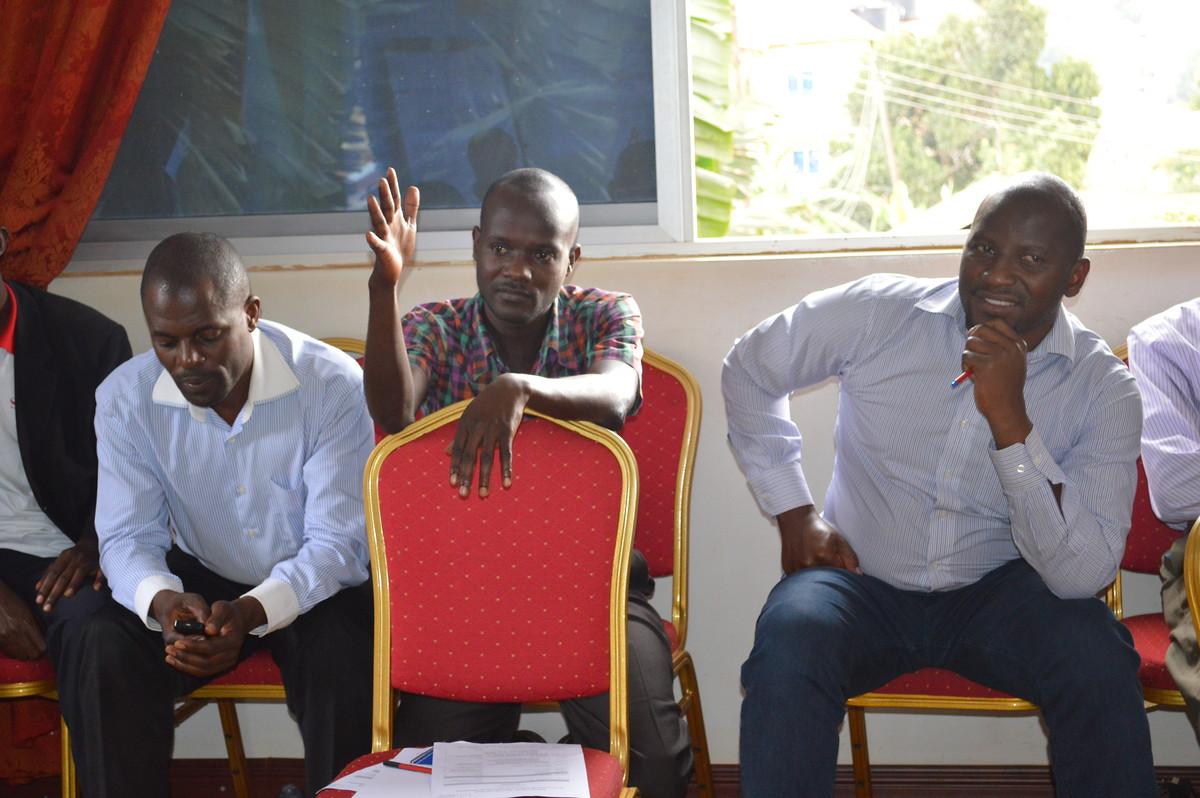 The workshop provided a lot of space for experience sharing and open discussions. 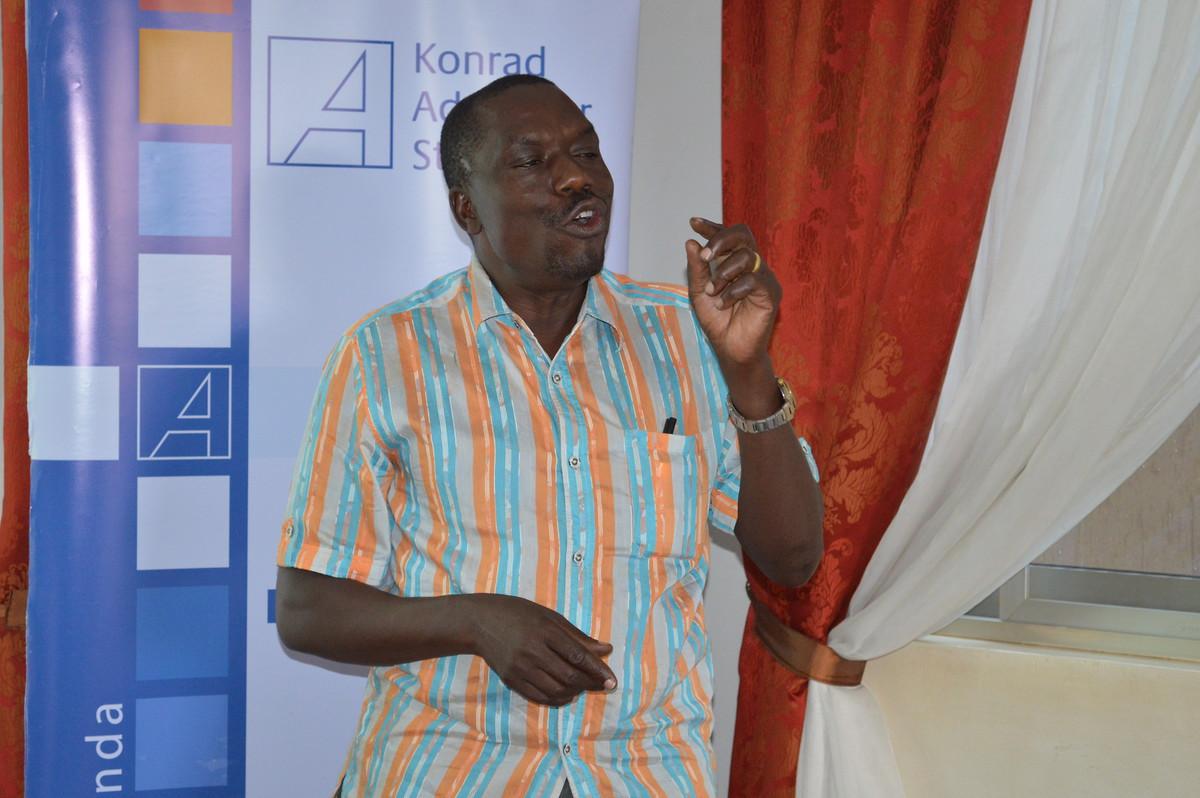 GAIN-Uganda is a non-profit network of civil society organisations (CSOs) that was founded following the great success of the project “Action for Strengthening Good Governance and Accountability in Uganda”. The EU co-financed project was implemented from 2011 to 2013 by the Konrad-Adenauer-Stiftung (KAS) in cooperation with Action for Development (ACFODE) in 11 Ugandan districts. Its overall objective was to contribute to the enhancement of democratic processes and accountability at the local level in Uganda while one of the specific objectives was to increase the capacities of and mechanisms for civil society and elected representatives to fulfil their roles and responsibilities in a democratic system more effectively. The measures of the project had as one of their outcomes the establishment of a network of CSOs who participated in the project. In 2014 the network named itself the Governance and Accountability Inter-District CSO Network – Uganda, or in short: GAIN-Uganda. Today, GAIN-Uganda consists of 19 member organisations that are committed and engaged in the principles of good governance, accountability, and human rights. At its core, GAIN-Uganda works towards a democratic and accountable society at all levels of governance and the protection of human rights and civil liberties.

The Konrad-Adenauer-Stiftung has been supporting GAIN-Uganda in the process of establishing itself as an organisation and a player in the field of good governance and accountability. One of the measures that the network and KAS agreed on was a capacity building workshop for the member organisations, since this first of all contributes to the overall capacity and capabilities of GAIN-Uganda and is, second of all, covered in the objective “strengthening the capacity of member organisations in the areas of good governance, accountability” outlined in the MoU of the network. For purposes of strengthening the network and increasing ownership, the capacity building workshop was planned for during a previous meeting of the National Steering Committee of GAIN-Uganda in May 2015. During this meeting, the aspect of peer learning was emphasised in order to use the network as the platform for experience sharing and joint learning which it was planned to be.

The workshop was opened with a session about the overall political environment in Uganda in connection to the elections in 2016. Each of the participants shared insights into the developments in their districts, which created a mosaic about the details of the political situation in the country in the run-up to the general elections next year. Based on these observations and experiences, ways in which the MOs could influence the developments which endanger the democratic process as well as prepare the voters in their respective districts for the elections were discussed with the input from Mathias Kamp, KAS Country Representative. At the same time, the participants had to realise that there are some developments and trends which they cannot influence and which they would have to work around in order to still be able to engage in voter and civic education.

In the first session of the workshop it became clear that it would be imperative for CSOs to build up strategic alliances with partners in the political sphere, the media, and civil society. Therefore, the second session of the workshop, which was facilitated by Awel Uwihanganye, KAS Programme Coordinator for South Sudan, Media, and Social Market Economy, was extremely relevant. He did not only outline what strategic alliance building means and why it is important, but also gave practical advice on how to engage potential partners and build up strong and useful alliances. The second day of the workshop was opened by Lyandro Komakech, Senior Research and Advocacy Officer with the Refugee Law Project. He facilitated the morning sessions on advocacy in a politically sensitive environment and took the participants through the entire process of coming up with an advocacy plan, including questions of how to identify issues for advocacy, primary and secondary advocacy targets, and possible strategies and methods. The final thematic session of the workshop focused on questions of resource mobilisations for CSOs in the Ugandan context of competition for resources within the area of governance and democracy. The facilitator of the session, Benson Ekwe Ocen, Executive Director of the Public Affairs Center, Uganda, shared his experiences with building up CSOs from scratch and how he succeeded in mobilising the necessary funds for his endeavours.

Besides the thematic sessions, the capacity building workshop was also used to present the final version of GAIN-Uganda’s strategic plan to the participants, to discuss and sign a Constitution for the network, and to present and finalise a work plan for the year 2016. In this regard, the workshop was not merely a capacity building workshop, but also crucial for GAIN-Uganda to grow together as a network, to increase ownership of all processes, and to establish the network as a serious player in the field of good governance and accountability in Uganda.

Keeping Together, Reaching Your Goals