In a momentous event, the Democracy Torch was received in Jinja District on 17th August 2012 as part of a campaign to draw attention of the local population to issues of democratic governance and accountability. The initiative is a component under the project “Action for Strengthening Good Governance and Accountability” which KAS and ACFODE are implementing in 11 districts with support from the European Union.
August 19, 2012 Ordering Information 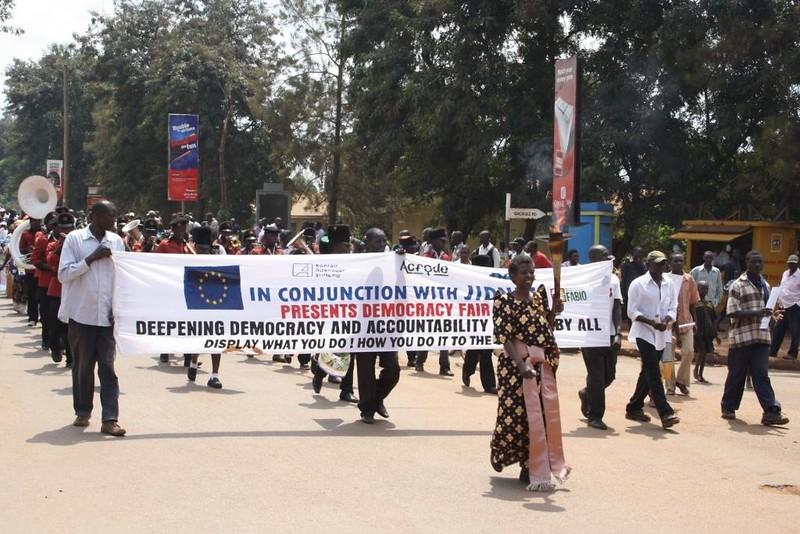 The Democracy Torch was received by the District Speaker who led a procession through the city center accompanied by a brass band, bicycle riders popularly known as “boda bodas” and women groups. The procession led to the Mayors Gardens at the Jinja Municipal Council Headquarters which was the venue of the democracy fair.

The event was attended by different actors from all spheres of society in the district. They included among others the District Vice Chairperson, the Mayor of Jinja, Councillors, religious leaders, civil society actors and exhibitors such as Uganda Human Rights Commission, Women Rights Initiative, Uganda Red Cross Society, PEFO and the business community.

KAS and ACFODE exhibited simple information materials such as banners, posters and flyers with the aim of explaining the values and principles of democracy to ordinary citizens with the help of comic images. The Democracy Torch was received by the political leaders in the district as a symbol for their commitment to the promotion of democracy and good governance.

The democracy fair and reception of the democracy torch further provided an opportunity to reach out to the local population in Jinja and raise their awareness on the democratic process including their rights, and roles and responsibilities of elected leaders and citizens.

A platform was created for local leaders to interact and dialogue with the citizens, thereby contributing to enhancement of transparency and accountability in the Jinja district.

Several entertainment activities were organised to make the event more colorful. They included a democracy bicycle rally, local cultural dances by women groups led by Nile Beat, a group of local musicians, and a thrilling performance by the popular local artist General Mega Dee. After the performances, speeches followed. Leader after leader praised the initiative of strengthening democratic governance and accountability. The Guest of Honor, the Diocesan Secretary of the Church of Uganda in Busoga Diocese in his message contended thus: “Democracy and Good Governance is a collective responsibility by all stakeholders at all levels. Leaders should be responsive to people’s issues if they are to remain relevant in office.”

Having concluded his communication, the guest of honor together with other invited guests was led through the KAS/ACFODE exhibition tent to view and receive some of the information materials on display. He then visited the tents of other exhibitors before being handed the Torch by Patrick Kayemba, the events coordinator. At this point the audience was beaming with excitement as the Torch was lifted high by the guest of honor, then he handed over to the Vice Chairman of the district, and subsequently moved to the Mayor, the speaker and to the local councillors as well as civil society actors who came to participate in the exhibition. In the end, over 280 participants turned up for the democracy fair.

The reception of the democracy torch in Jinja District marks the beginning of a journey to traverse all the remaining 10 target districts of the project which are Kiboga, Mbarara, Masaka, Kabale, Kisoro, Lira, Pader, Arua, Palisa and Soroti.