In a public lecture organised by the University Forum on Governance (UNIFOG) in cooperation with the Konrad-Adenauer-Stiftung (KAS) on 16 April 2014, Prof. Charles Kwesiga, Executive Director of the Uganda Industrial Research Institute, reflected on the chances of and challenges for economic transformation in Uganda. The lecture was followed by a panel discussion with representatives of academia, civil society, and politics. All panellists agreed that Uganda has the potential for economic transformation, but that the necessary economic and institutional framework for this was not in place.
May 12, 2014 Ordering Information 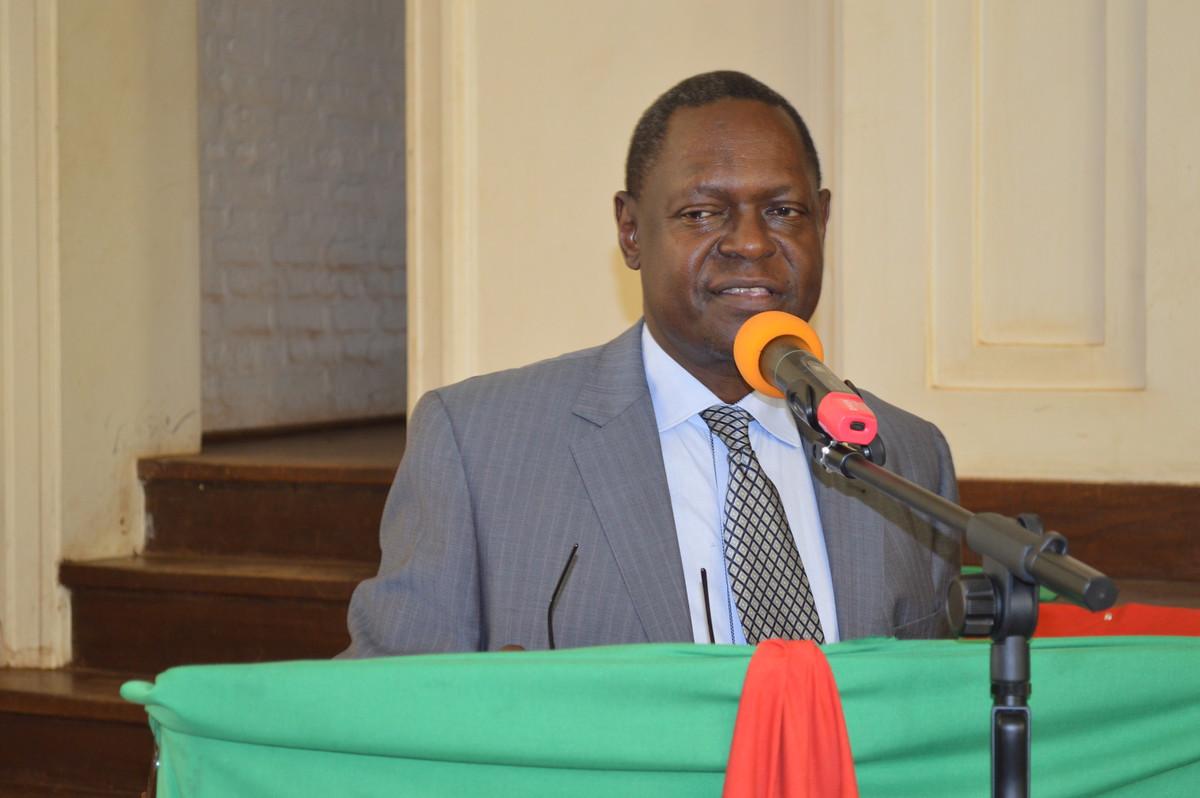 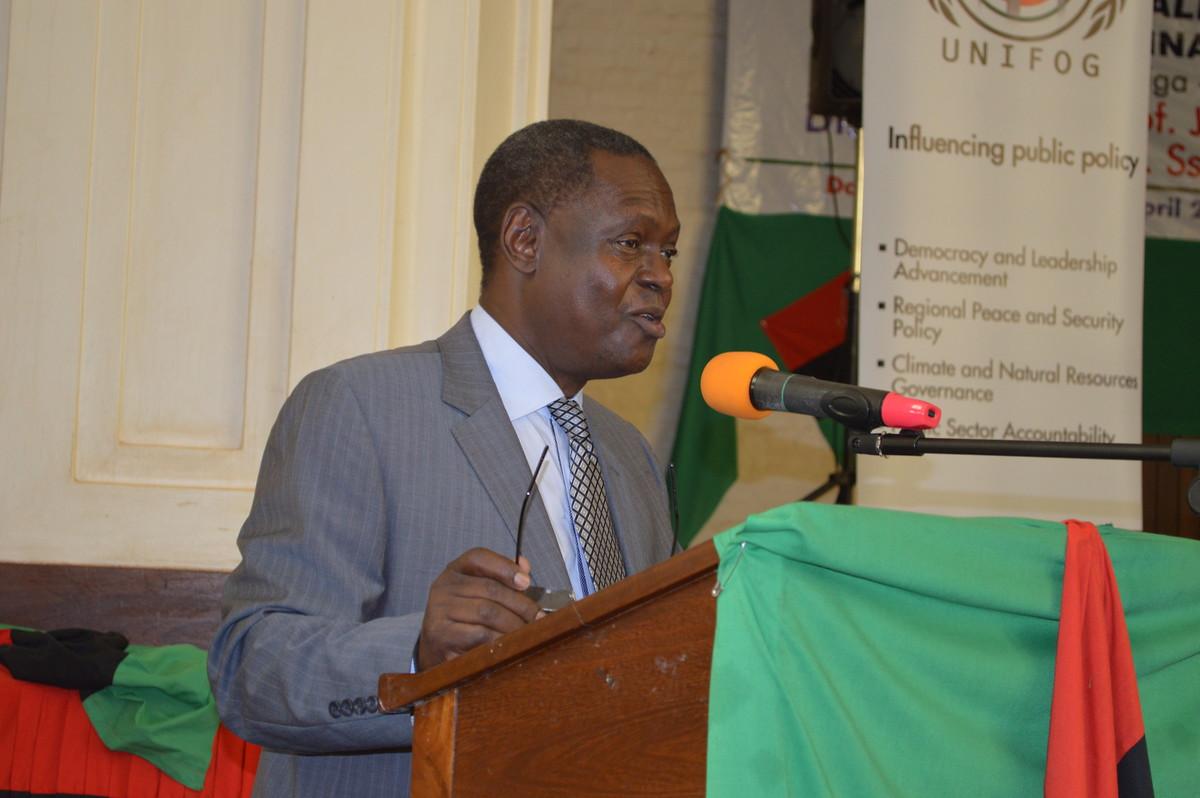 ... emphasised the importance of science, technology, and innovations. 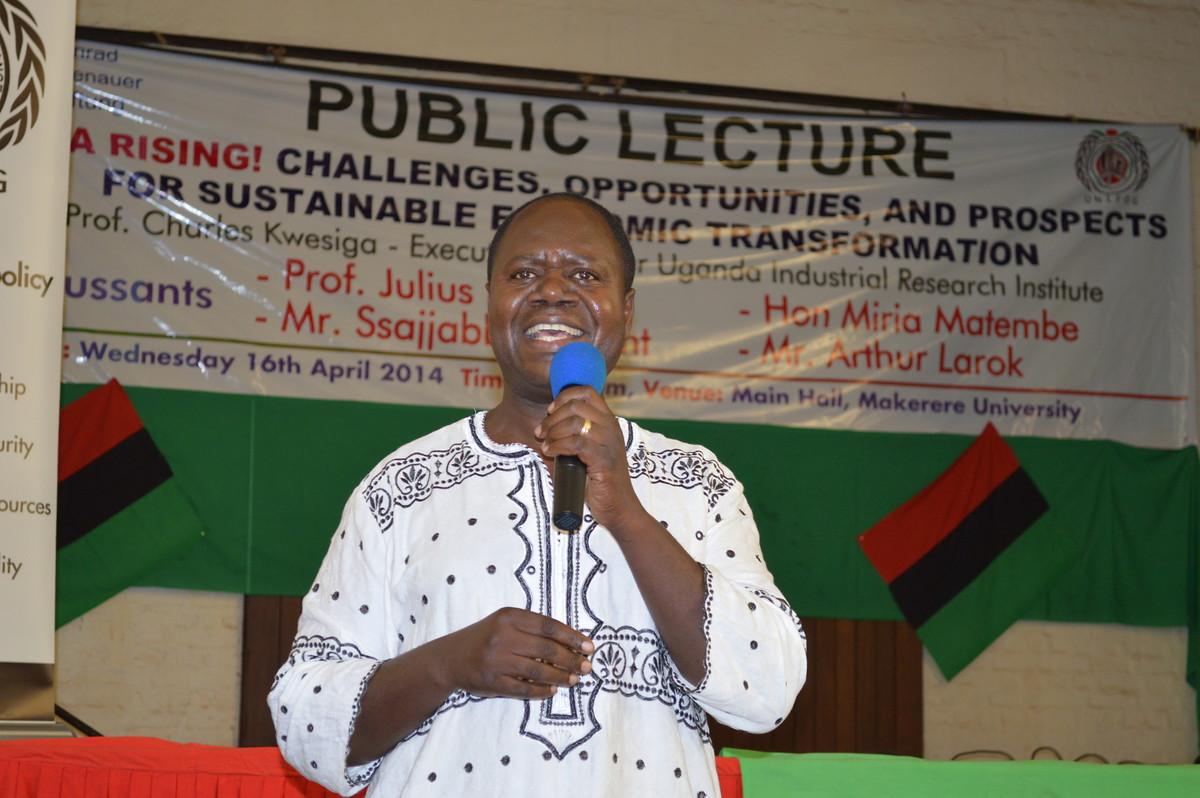 Prof. Kiiza, department of political science, Makerere University, explained that Uganda is spending too little money on research and development. 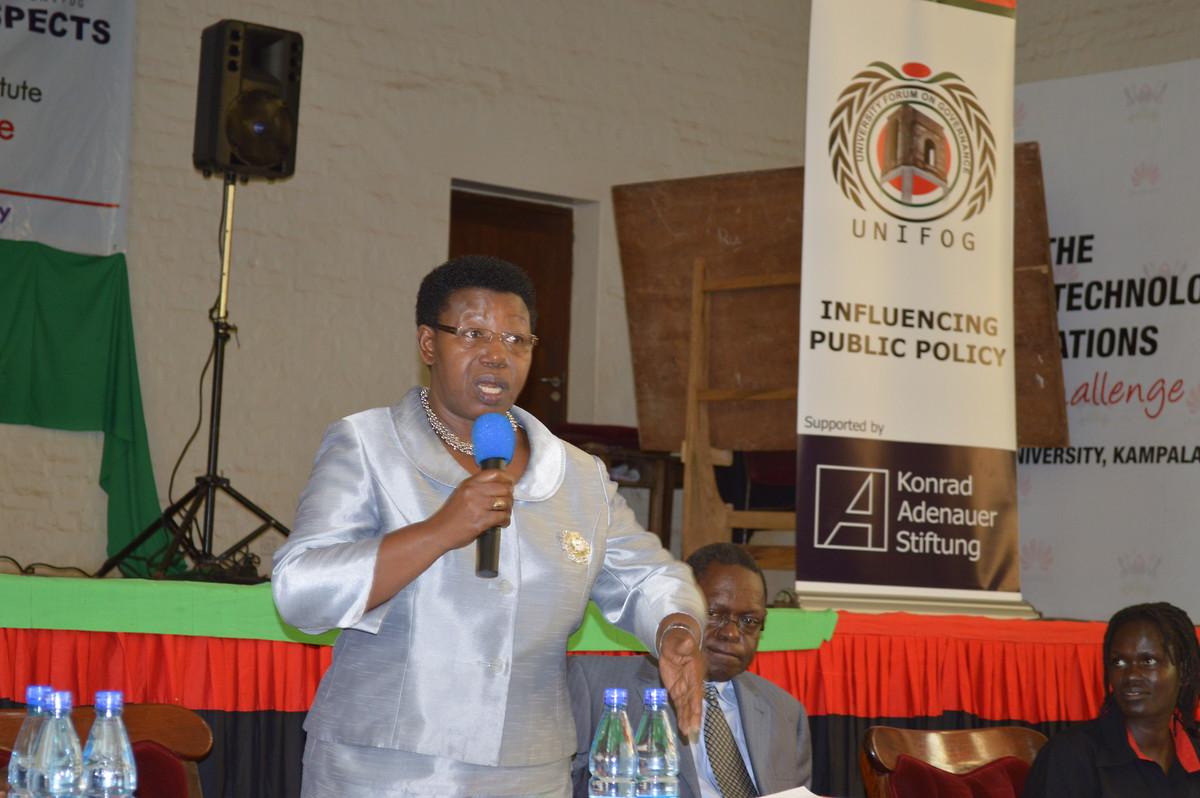 Hon. Miria Matembe, in her emotional contribution, identified a lack of good governance as the main impediment to economic transformation. 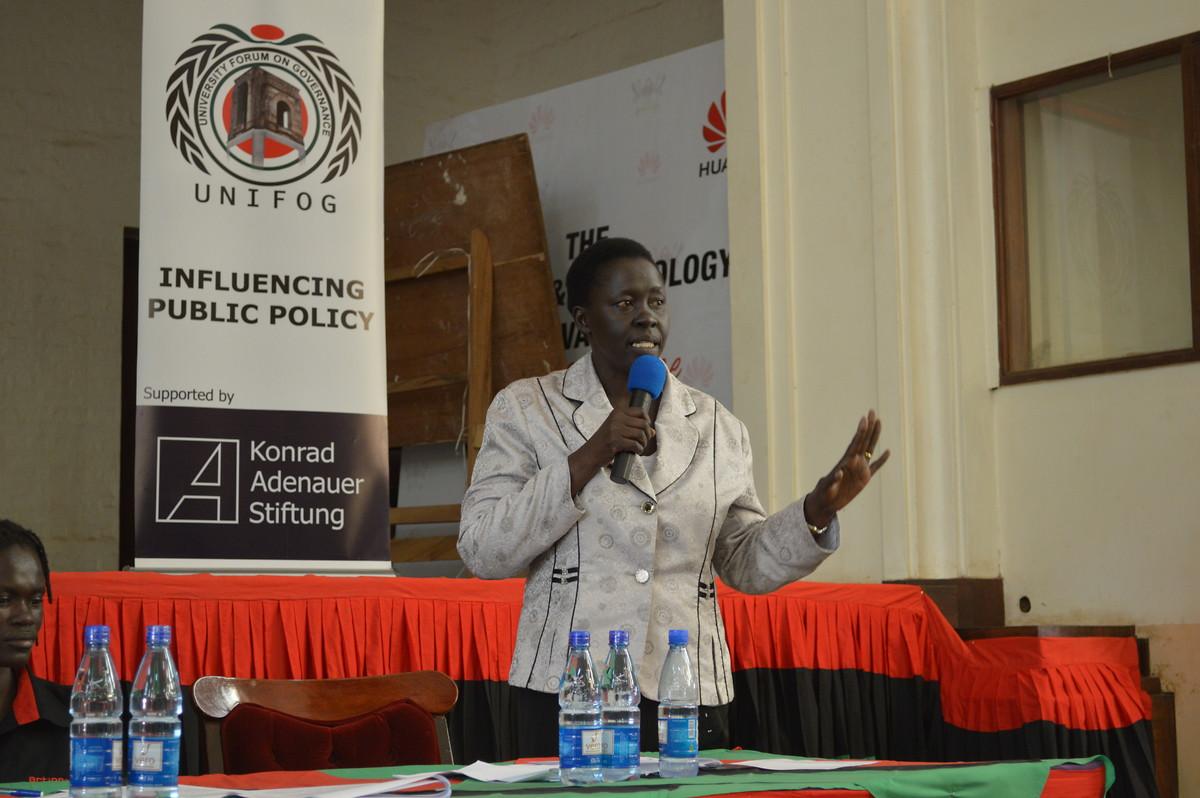 Hon. Alice Alaso explained that the money that should be invested in science and technology got lost among the way due to corruption. 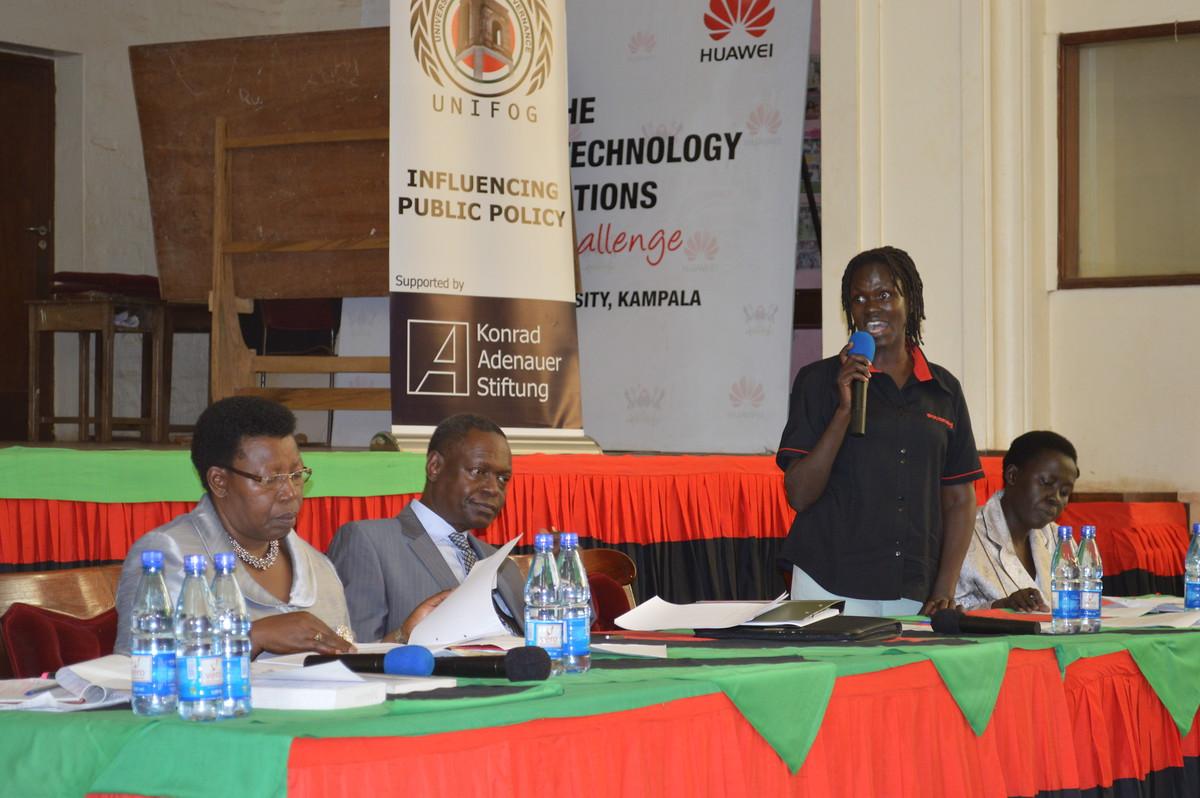 Florence Obua, ActionAid, reminded the audience that natural resources as such were not enough for Uganda to rise, but that the key question was how these resources were managed.

The event was organised against the background of a changing discourse about Africa as a continent. For the past view decades the dominant discourse on Africa has been one about countries that are mostly poor, underdeveloped, and in the worst cases torn by long-lasting and protracted violent conflict. Over the last decade, however, the African story has been changing in the face of the world. The discourse coined by so-called Afro-pessimists is today challenged by a newly developing narrative. A major aspect of this is that “Africa is rising.” The new image of Africa is that it is emerging into a success story of the 21st century with better economic growth prospects, emerging democracies, and expanding opportunities for confronting major challenges such as youth unemployment, food security and health related challenges.

The economic connotations of the “Africa is rising” narrative are premised on the promise of real and perceived economic opportunities. According to the Afro-optimists, who are the major proponents of this narrative, the new discoveries of oil and other minerals, major investments in transport and energy infrastructure, and the digital revolution are powering new growth, creating new markets, and expanding opportunity.

On the other hand, however, the Afro-pessimists dismiss the new wave of optimism arguing that the bulk of these resources have been with Africa for the last half a century of independence. This group of scholars and analysts point to the failures in governance, the evidence of democratic reversals in some countries and the pandemic of corruption as the trap that Africa must first overcome for these positive expectations to be realized.

The public lecture given by Prof. Charles Kwesiga was providing an inside on the question of how these two narratives are represented by Uganda, and what needs to be done to make it possible for Uganda to rise out of the ranks of the least developed countries. Prof. Kwesiga emphasised that „Africa Rising“ for some meant a rallying cry for action, for others it was an optimistic description of what was happening in different African countries. He, however, wanted to use this opportunity to give a realistic outlook on the challenges and opportunities for Uganda to rise (Prof. Kwesiga’s paper can be found here).

According to the Professor, Uganda was a country of developmental opposites: It was rich in resources, but the majority of the people lived in poverty; there was a vibrant academic sector, but outside the academia people were poorly skilled; and every few years there were eloquent development plans, which would never be implemented and did not show any effects. Therefore, according to him, the question how a country that was so richly endowed could do so badly on all indices, came to mind easily. The answer Prof. Kwesiga provided was that in Africa in general – and Uganda was no exception in this regard – there was too little investment in science, technology, and innovations. Only if these areas were supported significantly, there was, according to him, a chance for modernising the Ugandan society and triggering industrialisation. This in turn would lead to economic growth, marking the transformative process from peasantry to modernity. He went into further detail and stated that in his opinion there were three pillars on which Uganda could base its economic transformation: appropriate technologies for the Ugandan circumstances, an emphasis on technical skills, and functional economic planning, which among other things provided a sound financial infrastructure for investment. The professor went ahead to explain that there were two major hurdles in the way of the implementation of his proposal: The first was a firm attachment of Ugandans to the status quo, and the second was that academic achievements are given higher value than technical skills, which made technical and vocational training less attractive. In this regard, Prof. Kwesiga named Germany as a best practice example, since technical and vocational training was considered to be very important there and it brought forward a labour force that was highly trained and apprenticed in technical skills. In order to improve the situation in Uganda, he recommended to change the curricula so that they qualified students for working in the technical sector, and to better equip institutions of technical and vocational training.

Following the presentation by Dr. Kwesiga was a panel discussion with Julius Kiiza, Professor with the Department of Political Science, Makerere University, Florence Obua, the National Coordinator, of the department for Just and Democratic Governance with ActionAid, and Hon. Alice Alaso, Chairperson of the Parliamentary Accounts Committee and Secretary General of the Forum for Democratic Change, and Hon Miria Matembe, former Minister of ethics and integrity and civil society activist.

Commenting on the presentation by Prof. Kwesiga, Prof. Kiiza emphasised that research and the development of new technologies were crucial for Uganda to transform economically. He referred to a statement by the African Union, in which the member states are urged to spend at least one percent of their gross domestic product (GDP) on research and development. According to him, Uganda was far from following this recommendation, with only 0,005 % of the GDP being spent on research. He furthermore emphasised that there was also a governance dimension to the state of the economy in Uganda, referring to favouritism and nepotism, which lead to money being spent according to personal connections and not to institutionalised processes. Therefore, if more money was to be spent on research and development, an institutional framework would have to make sure that these funds end up where they are needed most in order to make a great impact.

Following this was a statement by Hon. Matembe, in which she emphasised that the answer to the question Prof. Kwesiga raised was plain and simple: good governance. She stated that Uganda and other African countries would never achieve economic transformation as long as it was characterised by poor infrastructure, “ignorant, poor, and extremely vulnerable citizens”, and corrupt governments which were resided over by “big men”, who were often ambitious individuals with “no vision for their country”, but acted according to personal interests.

Hon. Alaso concurred with the assessment that one of the major impediments to development in Uganda was a lack of good governance. According to her, the resources that could be used to support research and technical innovations got lost among the way due to corruption. Furthermore, the political will to systematically fight corruption was not in place and political institutions were weak and dysfunctional. This status quo, in her opinion, could only be altered if people first of all registered for the next elections and voted. She stressed that that was the only way governments can be controlled, corruption can be ended, and good governance can be achieved.

Mrs. Obua emphasised that oil and natural resources would as such not be enough to make Uganda rise. In her opinion there were two main challenges the country had to overcome first: first of all the question of resource management, which includes issues like corruption and a very young and largely unemployed population. Second of all, she cautioned that the trade relations Uganda was engaged in at the moment were not favourable for economic development, since they had turned Uganda into a hub of cheap products from other countries.

Following a heated debate with the audience, Henry Banyenzaki, Minister of State for Economic Monitoring, gave closing remarks in which he stressed the importance of determination. According to him, economic transformation could not come from the outside, but had to be internally triggered. Since the problems were by now well known, it was finally up to Ugandans to wake up and change their country.

All in all, the public lecture was a great success and made it not only possible to reflect on the challenges that Uganda faces when it comes to economic transformation, but also provided possible solutions to them. Key in this regard, as identified by the panellists, were a stable and reliable institutional framework, the necessary political will, determination on the side of the Ugandan citizens, and investment in research, science, and technology in order to trigger industrialisation and development.