"We need to own the Peace Agreement!" - Foundation Office Uganda and South Sudan

"We need to own the Peace Agreement!"

South Sudanese Refugees in Bweyale Town Meets to Learn More about the Revitalized Agreement on the Resolution of Conflict in South Sudan (ARCSS).
January 24, 2019 Ordering Information 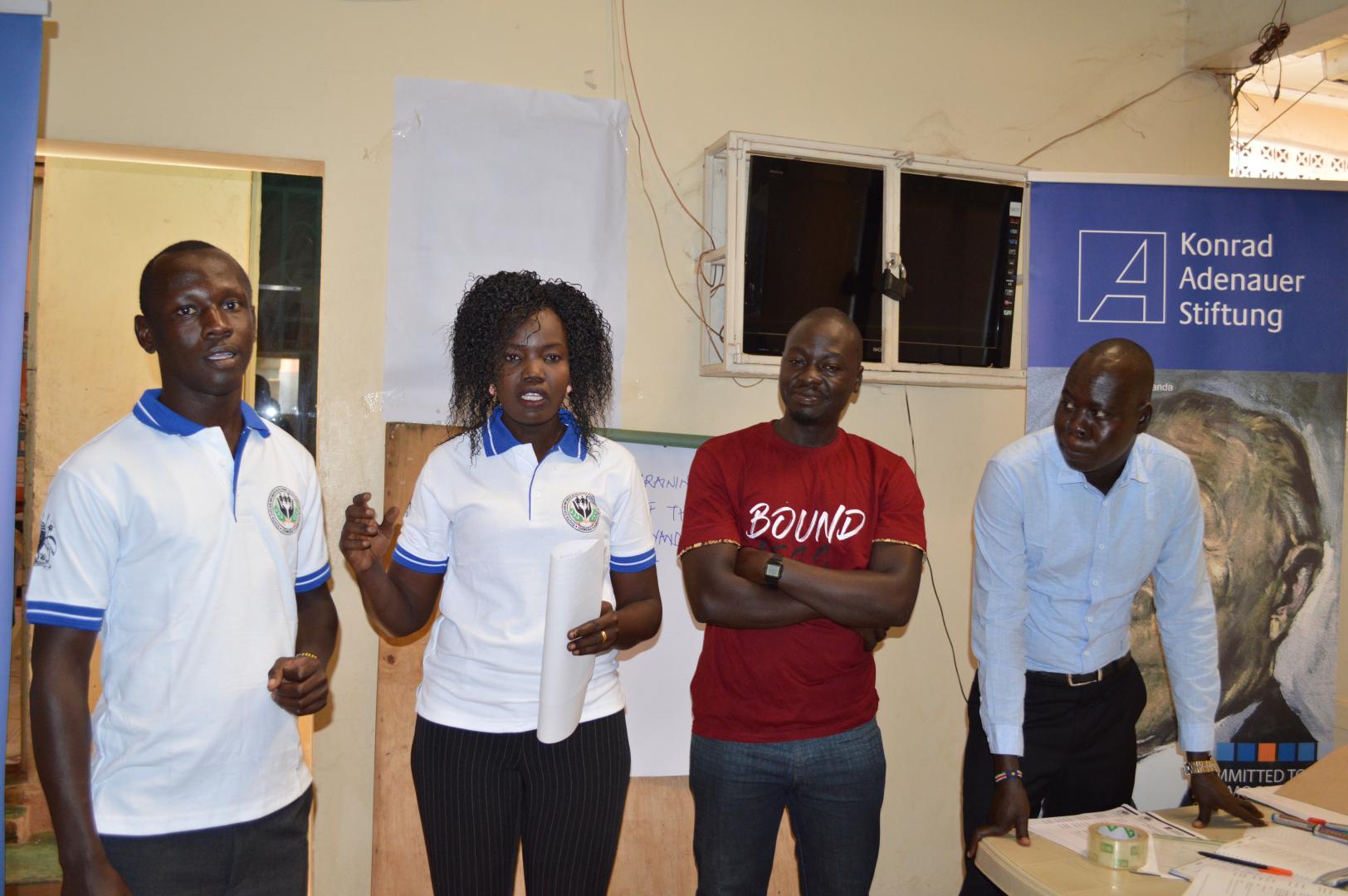 Members of SSWBAU, Donnas Ojok of KAS and Ter Manyang Gatwech of NoSSCOU 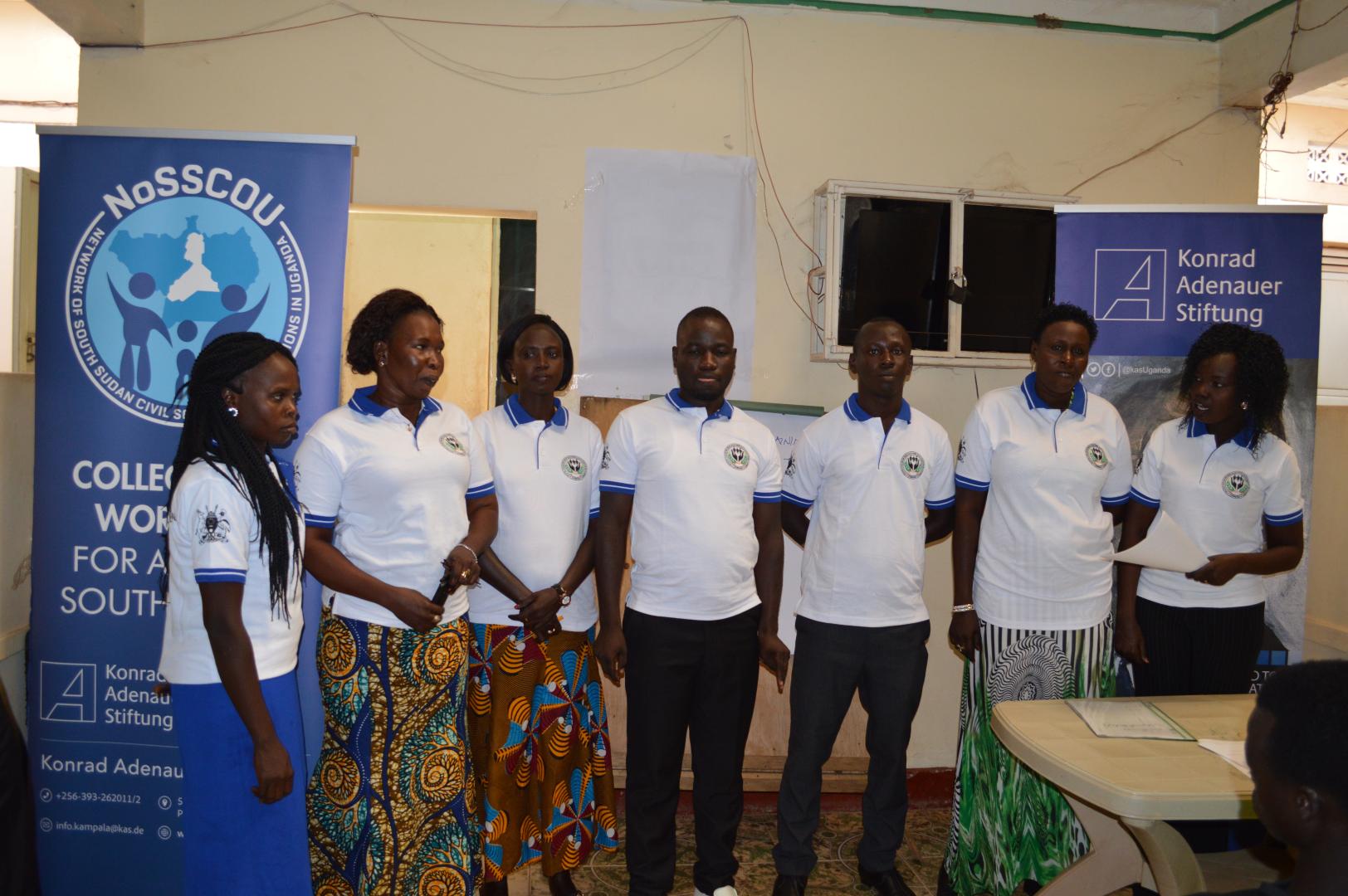 On Friday, 18th January 2019, the South Sudan Women Building Association in Uganda (SSWBAU) under the auspices of the Network of South Sudanese Civil Society Organization in Uganda (NoSSCOU) organized a workshop on South Sudanese peace dissemination with the support from Konrad-Adenauer-Stiftung in Bweyale. Participants of the workshop were leaders from the youth, women, the camp of the Kiryandongo Refugee Settlement, religious and community leaders. The aim of the workshop was to educate the participants on the R-ARCSS 2018 that the refugees can understand the Peace Agreement in detail and why it is important to maintain peace in the country.

In her welcome Monica Kiir Agoth, executive director of SSWBAU, emphasized that the importance of making ordinary South Sudanese citizens to fully understand the details of the peace deal cannot be underestimated because previous ones failed due to people’s ignorance about it. Shortly after the opening address, Biel Boutros Biel, a human rights lawyer gave a presentation about chapter five, six and eight of the R-ARCSS that was signed by the South Sudanese government and major opposition parties in September 2018.

Chapter 8 deals with the supremacy and the procedures for amendment of the agreement. Biel mentioned three points that are important for this chapter. The R-ARCSS will be incorporated into the Transitional Constitution of the Republic of South Sudan (TCRSS) 2011. The second point is that the agreement is above any law in South Sudan in time of the transitional period. The last point of chapter 8 is the amendment of R-ARCSS. The agreement needs to be amended by at least two-third of the Council of Ministers in the transitional government and by two-third of the Joint Monitoring & Evaluation Commission (JMEC).

Chapter 6 deals with the parameters of a permanent constitution. Biel mentioned the supremacy of the citizens must be exalted, and people must be consulted in the constitution making processes. Also, the ethnic and regional diversity needs to be respected. For the agreement to be successful “no group should dominate over the others because are ethnicities are equal before the law.” Biel emphasized.

In his third part of the presentation, Biel presented Chapter 5 of the R-ARCSS which is about Transitional Justice. Transitional Justice redresses legacies of human rights abuses through judicial and non-judicial measures. Three institutions will be established to achieve peace, justice, reconciliation and accountability: The Commission for Truth, Reconciliation and Healing (CTRH), the Hybrid Court for South Sudan (HCSS) and the Compensation and Reparation Authority (CRA). The CTRH is responsible to record what happened and who are the responsible people for the committed crimes during the conflict. HCSS, a hybrid court of national and international law will prosecute the committed crimes and the CRA will give compensation and material and symbolic reparations to the victims.

Biel Boutros Biel emphasized in his presentation the importance of the South Sudanese citizens in this peace process and what every person can do to make the peace agreement work. One way of this doing, he suggested is by the ordinary citizens holding their leaders accountable. Similarly, ordinary South Sudanese should treat each other as fellow country men and women rather than being divided along political and ethnic lines. Biel concluded that the journey to a successful peace building in South Sudan won’t be an easy journey. “It is a painful but a worthwhile one because we all need peace”.