Social Market Economy as an Alternative Approach to Poverty Reduction?

At a public dialogue organised by Makerere University Convocation (MUC) and Konrad-Adenauer-Stiftung (KAS) leading representatives from the academic as well as the political sphere discussed whether the concept of Social Market Economy could represent an alternative approach to ensure inclusive growth and poverty reduction in Uganda. They largely agreed that a mixture of free market and the creation of a social balance through state intervention in cases of market failure is the way forward.
July 26, 2011 Ordering Information

Discussing at the dialogue Hon. Mr. Biraahwa (Chairperson, Parliamentary Committee on National Economy) and Mr. Godwin Commissioner, Ministry of Finance Planning & Economic Development) saw the principles of Social Market Economy (SME) as already practiced in Uganda’s economic policies. However, Prof. Yasin Olum (Makerere University) questioned whether the state capacities in Uganda are at all sufficiently strong enough for the implementation of SME principles. He was sceptical as top whether the Government of Uganda (GoU) can intervene when the market fails. The leader of the opposition in the Ugandan parliament, Hon. Mr. Mafabi, accused the incumbent government in Uganda of failing in translating economic growth into the creation of jobs and gainful employment for the majority of Uganda and a lack of political leadership. Prof. Mubazi (Makerere University) who gave the introduction to the public dialogue identified Social Market Economy as a business-friendly system of socioeconomic development, which reduces social tensions and creates stability.

Introduction into the concept of Social Market Economy

Prof. Mubazi characterised the concept of Social Market Economy as a value system, which puts the human being at the centre. “It is based on market efficiency that rests on equal opportunity”, he illustrated the underlying idea of SME Since the market would not function perfectly in every case the state interferes in a Social Market Economy in order to create a market order. According to Mubazi, Social Market Economy links competitive market economy based on private initiative with social progress and thereby harmonises the fundamental principles of freedoms with social justice.

The potentials of Social Market Economy to tackle the problem of poverty, which Mubazi defines as the inability to attain a minimum standard of living as well as the exclusion from activities considered as necessary by the society as a whole, would depend on its capacities to influence the causes of poverty such as poor health, a lack of access to markets, education, bad governance and others. Mubazi sees in the concept of Social Market Economy a useful approach for managing the global economy, which would furthermore ensure meaningful social and economic policies in developing countries.

“Uganda’s economic policies are in the middle of socialism and capitalism”, Mr. Godwin stated. He mentioned the National Development Plan as a good example for state intervention and the provision of public goods. In Uganda state interventions should be focussed on the most desirable infrastructure such as energy supply since the availability of it would represent a precondition for social development. State subsidies in other areas could only be enlarged when this foundation is developed.

Prof. Olum argued that the preconditions for a successful implementation of the concept of Social Market Economy with its principles of ‘economic liberties’, ‘social responsibility’ and the ‘democratic rule-of-law’ are not yet given in Uganda. He mentioned low salaries of many public servants such as teachers, policemen and university professors as just one example for a “clear violation of some people’s individual liberties and freedoms in public offices, personal security and living condition”. Uganda would not score highly in creating a fair society where all individual have equal opportunities. “What the Government of Uganda should have done is to put functional mechanisms for public policymaking and implementation so as to share out the national resources in a just way”, he stated. According to Prof. Olum, a Social Market Economy ensures that the state is properly oriented towards the demands of the citizenry and creates a harmony in society by giving real power to the people. Against this background, he emphasised the question whether the state in Uganda works towards improving the welfare of the citizens or rather just cater for the needs of its leader.

Hon. Biraahwa countered urging that Uganda would already be practising the concept of Social Market Economy within its economic policy since it combines socialistic and capitalistic elements. He emphasised that the economic liberalization of the last decades has helped to produce significant economic growth and to reduce donor dependency from 99% to 27% but acknowledged at the same time that some of the liberalization efforts went too far. After the end of the Cold War and the recent worldwide economic crisis it would be indisputable that a mixture of economic systems is the ‘golden way’. According to Hon. Biraahwa, the laissez-faire economic policy was not a unique Ugandan phenomenon but rather a ‘global infection’. Private companies would take to much profit out of the country, he continued. Therefore, the question of redistribution and how the government can raise taxes in order to provide public goods would represent the current central challenge in this country.

The leader of the opposition in the Ugandan parliament, Hon. Mafabi, criticised the government of Uganda for the failure to translate economic growth into the improvement of the living conditions of major parts of the population. The legal situation in Uganda would be already adequate in many cases but the lack of political leadership within the incumbent government would result in an ineffective implementation of the law. According to Hon. Mafabi, the Ugandan government has not kept the promise to establish a self-sustained economy. He identified the lack of proper planning, irrational decision-making as well as too less investment in the agricultural sector as the causes of this development.

In the following open discussion participants of various backgrounds contributed to the discussion by raising questions about the potential future prospects of a Social Market Economy in Uganda as well as aspects of poverty reduction such as the role of education as a key instruments for social development. 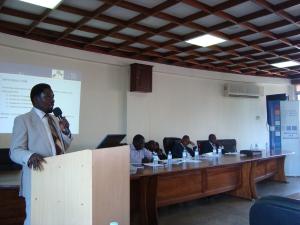