by Yusuf Kiranda
The second round of training workshops for local government leaders and civil society actors has taken place in Kiboga district. Implemented by KAS and ACFODE the activities are part of the EU funded project: Action for Strengthening Good Governance and Accountability.
February 2, 2012 Ordering Information

The councillors’ workshop in Kiboga took place January 30th to February 1st 2012 while that of civil society was held from February 1st to 4th. All members of the district council have been trained on the concepts of democratic governance and accountability with emphasis put on their roles and responsibilities as elected representatives of the people. In addition, the workshop was a platform for district council members to interrogate existing challenges and by this they have been able to build a consensus on a set of actions they will undertake to deepen democracy, good governance and accountability in the district. The participants recognised that as a district council they have to assume their mandate of strengthening the values of good governance and accountable leadership. The councillors committed to building more effective linkages with their electorate through regular meetings and other interactive platforms.

On the other hand, a highly motivated team of civil society actors have been trained as trainers on good governance and accountability. These will be supported within the framework of the project to carry out grassroots civic education activities in the district. The 18 civil society actors trained present a pool of capacitated individuals who will steer citizen education interventions as a way of strengthening the demand side of democracy and accountability.

Although located barely 132 kilometres from the capital Kampala, Kiboga comparatively lags behind most districts in central Uganda in terms of development. The material infrastructure is in many aspects below the status of most districts in region. Yet the approximately 17,000 inhabitants of this area which is strategically located on the way to the centre of Uganda’s petrochemical industry, Hoima, have the advantage of a land endowed with fertile untapped soils with a generally favourable climate – particularly for agriculture. The wallowing poverty in spite of several development interventions by government and other development agencies points to a strong need for strengthening citizen participation as the only mechanism for implementing effective and sustainable development actions. It is surprising that during the councillors’ workshop, local government leaders noted the lack of community ownership of development programmes as a major challenge. They observed that the people barely know what is going on and how it is being done. Local citizens therefore do not feel being part of the process. This is why according to the participants it is common to find people who refer to livestock donated under the National Agriculture Advisory Services (NAADS) programmes as “government animals” which they clearly distinguish from their own animals.

If people participation in the development process is to be realised, citizens need to first and foremost understand their roles and responsibilities. This will strengthen the demand side for citizen participation and good governance. On the other hand, elected leaders need to be aware of their responsibility to get the people involved in the promotion of accountability.. In this regard, the KAS-ACFODE project aims to contribute to the enhancement of democratic processes and accountability at the local level. Its specific objective is to increase the capacities of and mechanisms for civil society and elected representatives to fulfill their roles and responsibilities in a democratic system more effectively.

Under the project, the training workshops are a step in a set of carefully selected interventions in which local citizens will be educated on democratic accountability. A package of instruments including fact cards and comic strips have been compiled into a civic education toolkit available in both English and local languages. These will be used to conduct civic education at the grassroots and will be handed over to citizens at the local levels. Democracy fairs combined with a reception of democracy torch will be held in each of the project districts. An assessment of the state of democratic governance and accountability will be conducted through a district peer review mechanism. Besides Kiboga, other districts where the project is being implemented are: Arua, Lira and Pader in northern Uganda, Kabale, Kisoro and Mbarara in the west, Jinja, Palisa and Soroti in the east and Masaka in the central region. 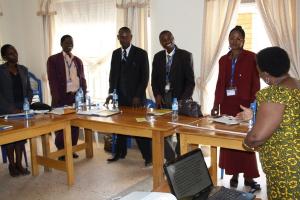