In a high level conference organised by the Konrad-Adenauer-Stiftung in conjunction with the Uganda National Chamber for Commerce and Industry a range of outstanding experts presented their views on the topic of oil production in Uganda. The main focus of the discussion was on the question how the expected oil revenues can be managed in a meaningful way in order to ensure a sustainable and socially balanced economic development. The presentations and discussions generated a number of concrete recommendations – among them the establishment of a sovereign oil fund for the Ugandan people.
September 14, 2012 Ordering Information 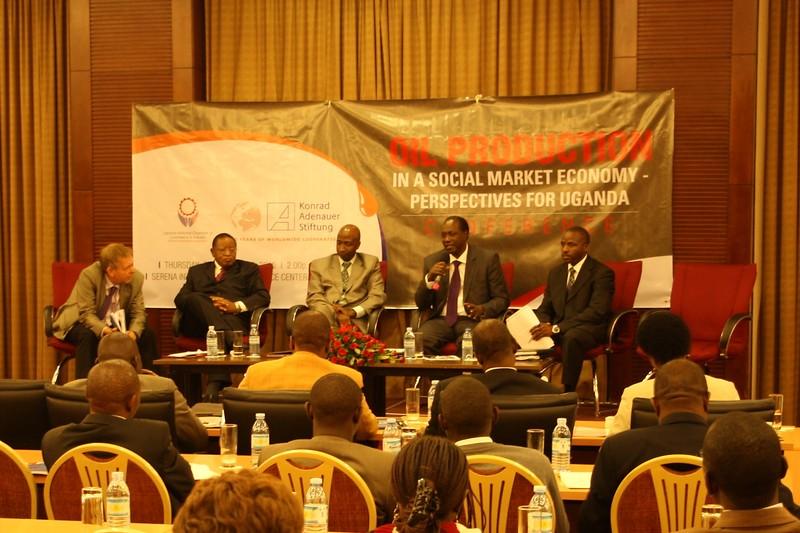 The Conference on "Oil Production in a Social Market Economy - Perspectives for Uganda" brought together a panel of outstanding experts from Uganda and abroad. 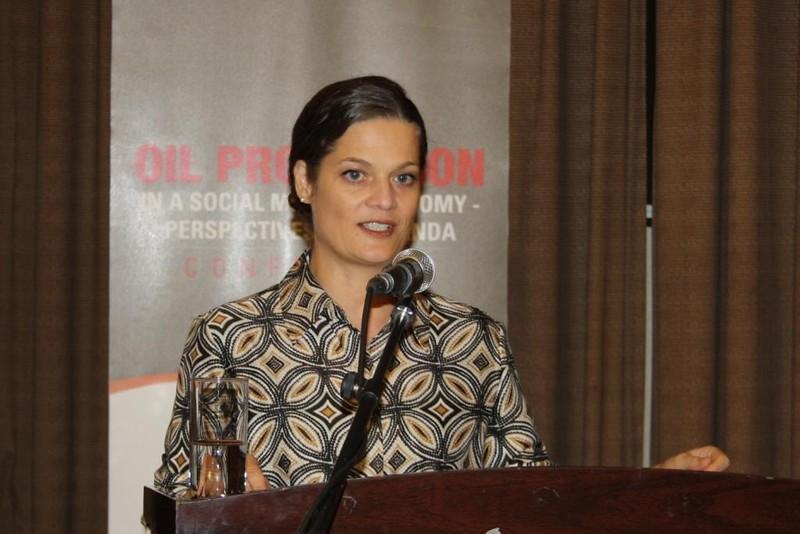 Dr. Angelika Klein, Head of the KAS Country Office in Uganda, welcomed the invited guests and highlighted the potential of the principles of Social Market Economy for inspiring meaningful policies for managing oil revenues in Uganda. 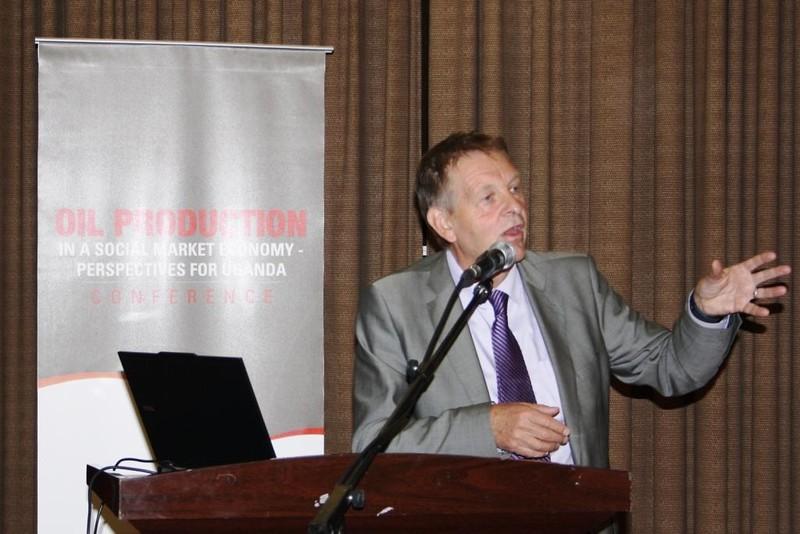 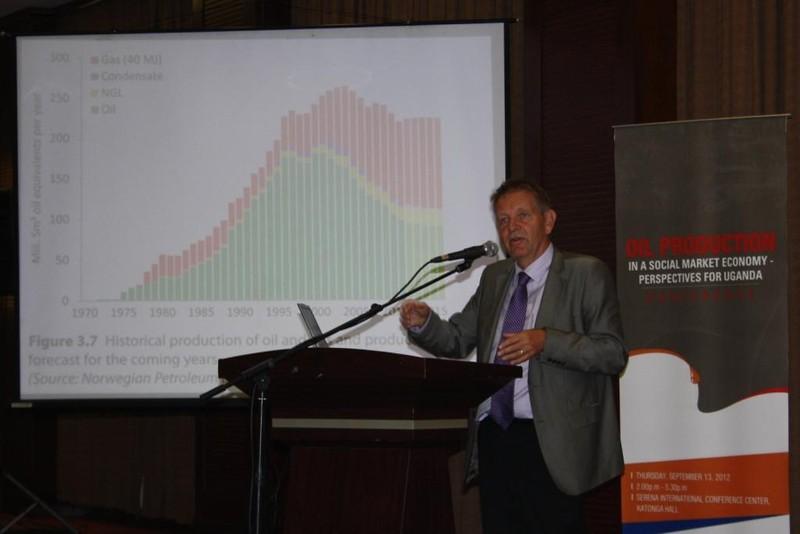 With reference to the Norwegian experience Mr. Nore outlined a number of recommendations for Uganda's oil production strategy. 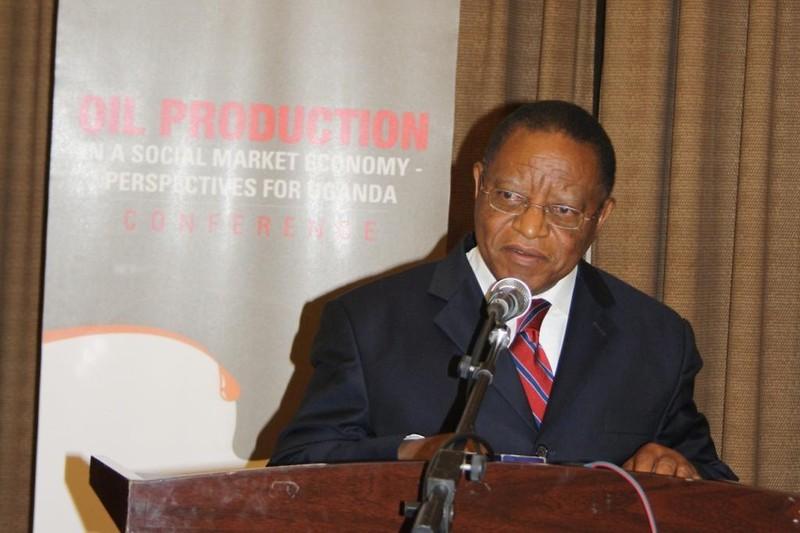 Dr. Ezra Suruma, Senior Presidential Advisor on the Economy, emphasised the responsibility of the government to provide minimum social welfare and suggested the establishment of a "Petroleum Wealth Fund”. 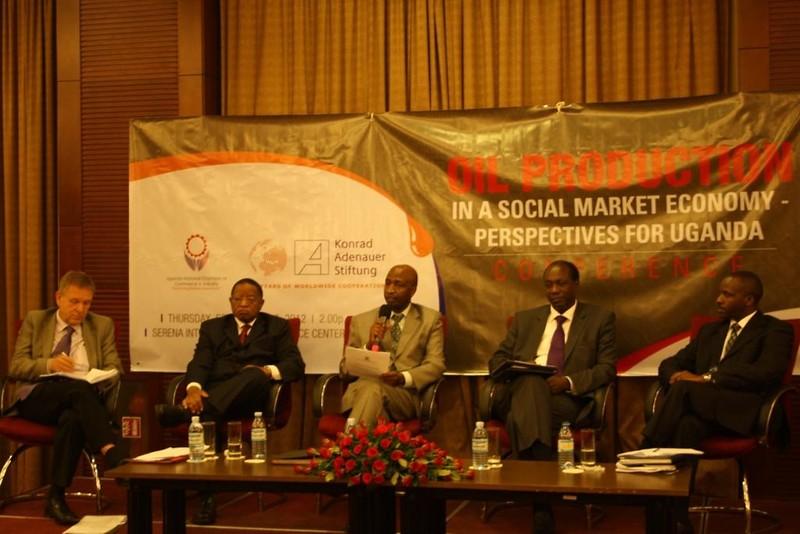 In the following panel discussion, Ernest Rubondo (centre), Commissioner for Mineral for Petroleum Exploration and Production in the Ministry for Energy and Mineral Development, provided detailed information about the Ugandan oil production strategy. 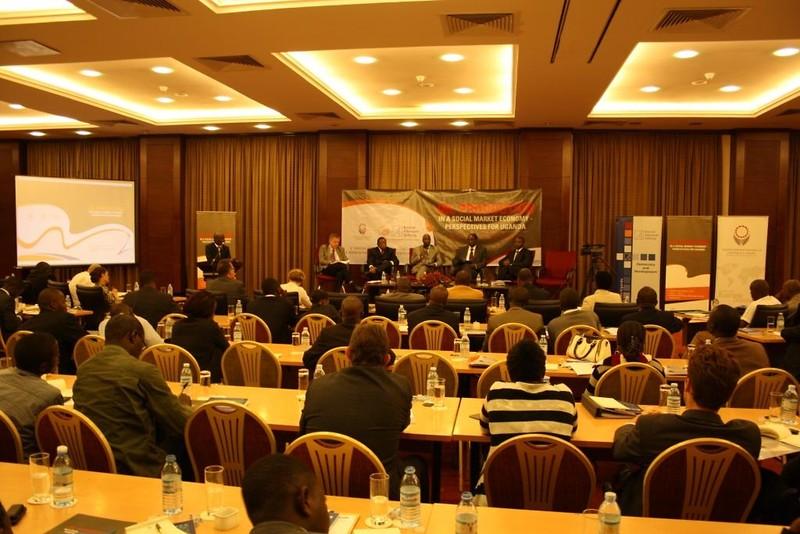 His presentation was keenly followed by the audience at the Serena International Conference Centre. 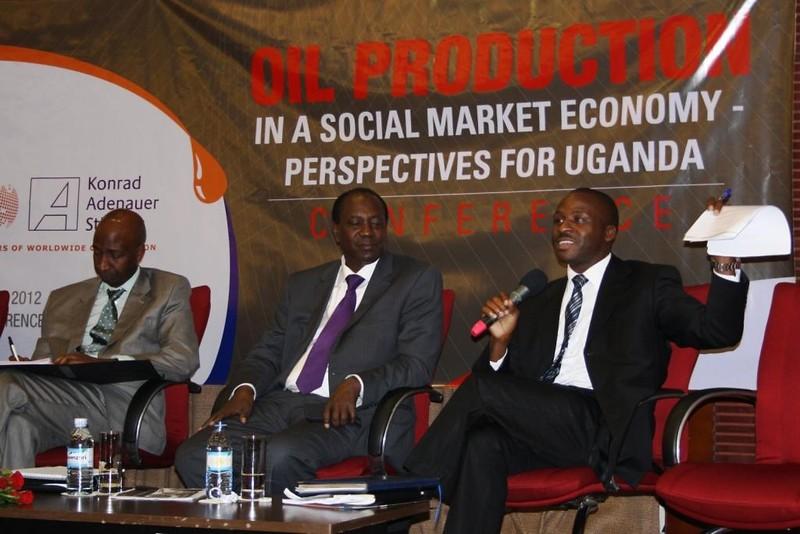 Dickens Kamugisha from the Africa Institute for Energy Governance provided a civil society perspective on the topic. 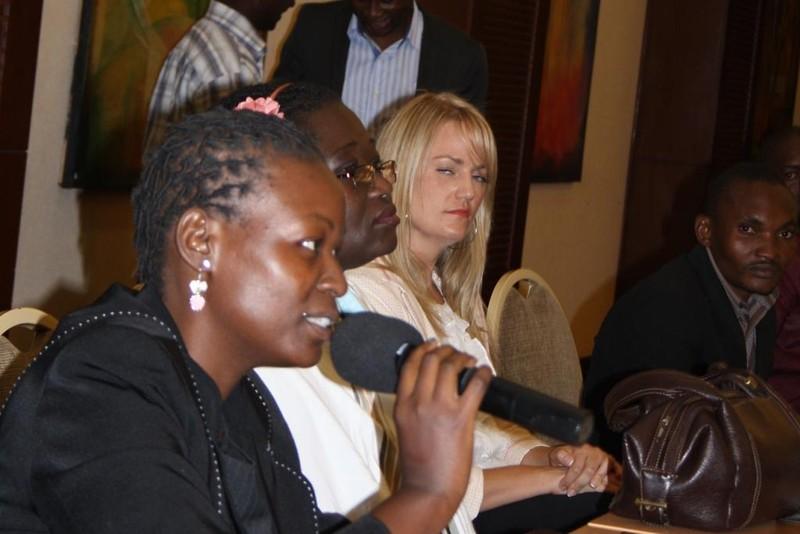 After the panel discussion the floor was opened for input from the audience. 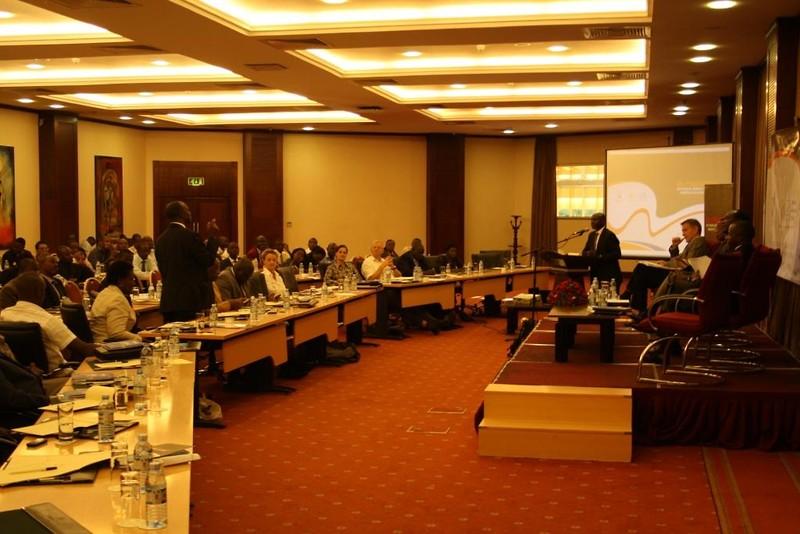 The audience was made up of around 200 representatives from government institutions, political parties, academia, civil society and the private sector... 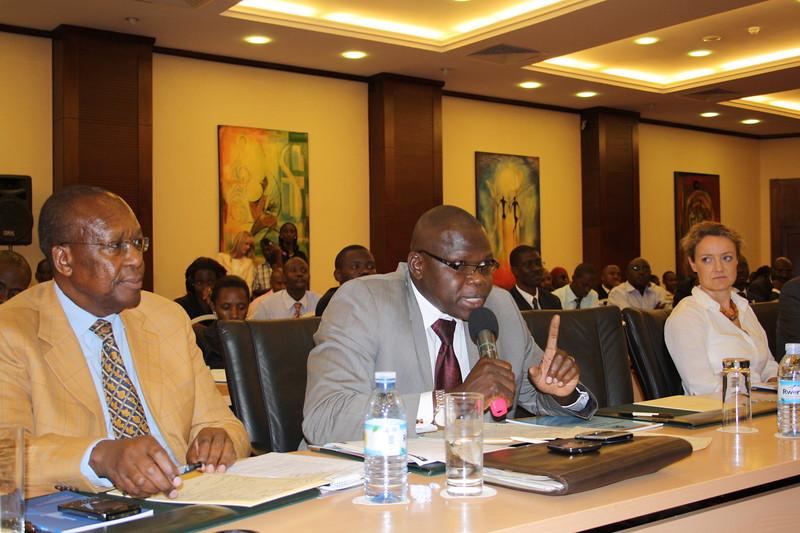 ...among them Hon. Stephen Mukitale, Chairman of the Parliamentary Committee on National Economy... 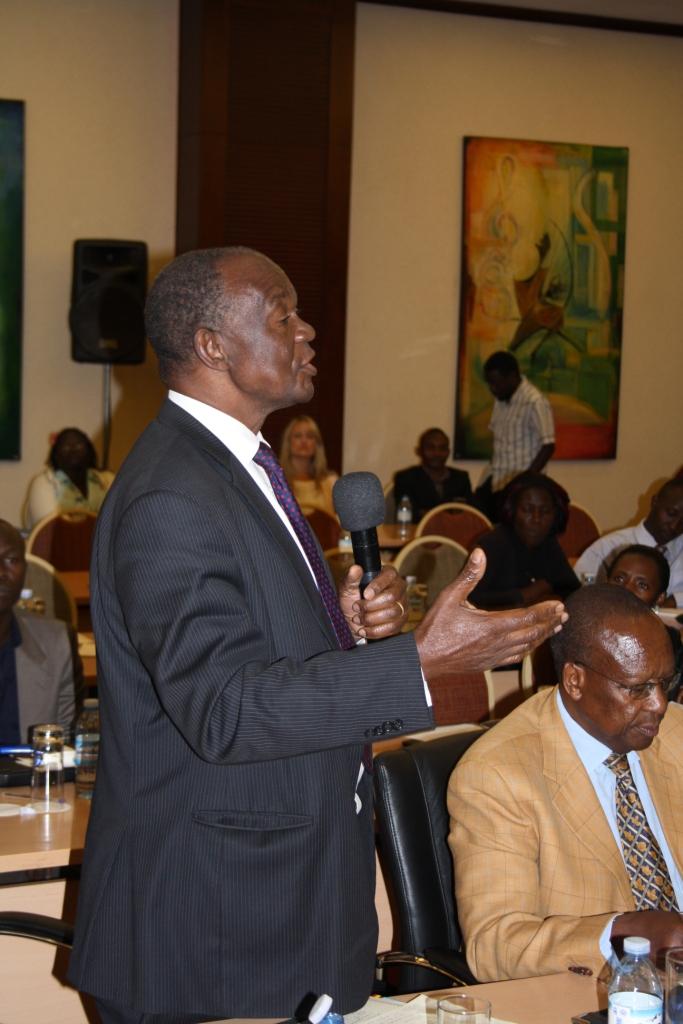 ...and Dr. Wilberforce Mugerwa, Chairman of the National Planning Authority. 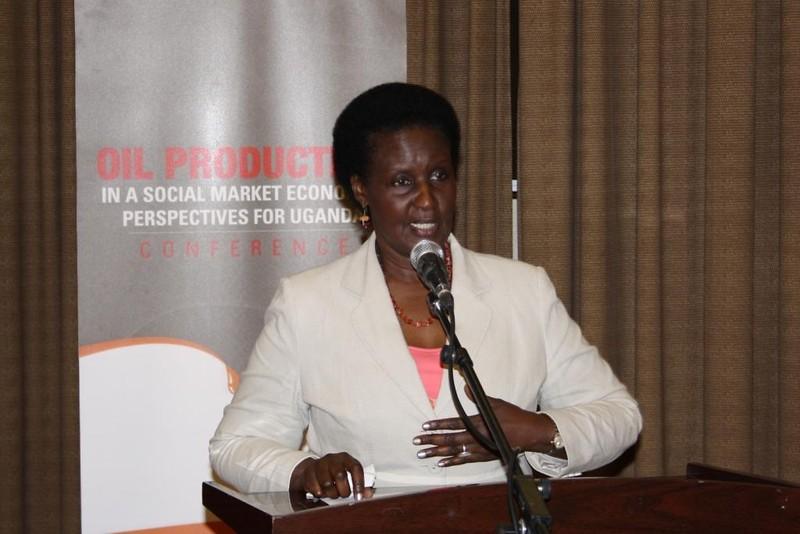 The conference was closed by the Minister of Trade, Industry and Cooperatives, Hon. Amelia Kyambadde.

The conference which took place at the Serena International Conference Centre in Kampala on 13th September was supported by the Konrad-Adenauer-Stiftung (KAS) under the political dialogue programme on the principles of Social Market Economy and their potential for inspiring meaningful economic policies for Uganda. For the first time, KAS cooperated with the Uganda National Chamber of Commerce and Industry (UNCCI) - the oldest and largest nation-wide umbrella organization of the private sector in Uganda. UNCCI was formed as a private sector body and has grown to become a vibrant and credible business association, owned by members of the Ugandan business community.

The recent discovery of significant oil reserves in Uganda and the ongoing explorations are currently a dominant topic of discussion among experts and policy makers as well as the general public in Uganda. With oil production expected to start latest in 2015, the “oil factor” will most likely be the single dominant factor influencing economic development as well as economic policy formulation for the years to come.

The oil discovery and the expected revenues from oil production are seen as an opportunity and a challenge at the same time. The euphoria about the expected economic benefits is mixed with worries about negative side effects of oil production that can be observed elsewhere and the fear of the so-called “oil curse”.

Experts and policy makers agree that in order to maximise the benefits and to avoid negative effects, the oil production - and particularly the expected revenue - needs to be managed in a meaningful manner. In order for the oil production to positively contribute to sustainable economic growth and development and to ensure that all spheres of society enjoy the benefits, the right policies have to be designed and adopted well in time.

The conference on “Oil Production in a Social Market Economy” which brought together around 200 experts and stakeholders from politics, academia, civil society and the private sector provided an important input and stimulus for the necessary constructive dialogue on the question of how to manage the expected oil revenues.

The keynote presentation was given by Petter Nore, senior expert on the management of oil revenues and director of Norway’s Oil for Development Programme. He presented the case of Norway, which provides an excellent example of an oil producing country that has for decades been benefiting from its oil revenues in a sustainable and inclusive manner due to a meaningful policy framework based on principles of Social Market Economy.

Mr. Nore emphasised that the discovery and exploitation of oil resources in Uganda could turn into either a blessing or a curse – depending on whether the country will put in place and effectively implement the right strategies.

Referring to the Norwegian example he highlighted a number of characteristics that made the Norwegian oil experience a success story. These include political stability, a predictable legal and regulatory framework, strong institutions, an effective system of controlling how the revenues are spent (or saved), the involvement of “watchdogs” such as the parliament, media and civil society organisations, and a proper balance between the interests of the different stakeholders.

While emphasising that Uganda cannot just simply copy the Norwegian model but rather has to find its own strategy, he still insisted that in order for Uganda to utilise the oil revenues appropriately and avoid negative scenarios such as the “dutch disease”, the characteristics mentioned above should inspire the Ugandan approach.

Mr. Nore’s input was followed by a presentation from Dr. Ezra Suruma, former Minister of Finance and currently Senior Advisor on the Economy to the Ugandan President. According to Suruma, “there is little doubt that oil revenues have a very high propensity to bring a curse in the form of corruption, inequality, structural distortion of production, loss of exports and inflation. However, oil revenues also offer an opportunity to increase employment, to provide social security and to reduce corruption”. Thus, he concluded that the main problem, which Uganda now faces, is how to manage the revenues – or in his words the “unprecedented size of money that is likely to flow into the country from the sale of oil” - in an efficient and equitable manner.

Dr. Suruma expressed his optimism that the oil production will provide the Ugandan government with the resources it needs to significantly improve the lives of the mass of Ugandans and set them on a path to sustainable development. He highlighted the need for balancing the purely commercial interests and private benefits with a pro-active approach of improving the provision of public goods and social welfare.

“We see, in advanced economies, that the unemployed get unemployment insurance; the old get pensions, medical aid and other types of retirement income; the disabled have allowances and institutions to assist them; and the general principle that a citizen should not be allowed to fall into a ‘subhuman’ state is embraced with varying degrees of conviction. That the government should provide a social safety net for its citizens is generally accepted in virtually all developed countries, including especially those in Europe “, Suruma stated with regard to the government’s responsibility of ensuring a certain social balance.

He concluded his presentation by suggesting the establishment of a “Uganda Petroleum Wealth Fund”, which should absorb at least 50% of the net revenue from oil. He argued that “the government is definitely going to need some of the oil money to meet its traditional as well as other evolving obligations. However, as a free people, Ugandans have the right to determine for themselves how to allocate their resources. Some of the oil revenues, preferably a significant portion of them, should be allocated by the people themselves and not by the government. “

After the presentations the topic was discussed with a panel of experts.

Ernest Rubondo, Commissioner of the Petroleum Exploration and Production Department in the Ugandan Ministry of Energy and Mineral Development, is the leading government expert on the topic of oil. He provided insights into some of the technical and financial details of the Ugandan oil production strategy as of now. He emphasised that the oil production will take off gradually and that therefore the revenues will “trickle in as time progresses”. The audience at the conference keenly followed Rubundo’s explanations. As one participant put it: “This is the first time that such information is publicly shared in a forum like this”. Rubondo, however, insisted that the existing oil policy as developed by the Ugandan government would ensure a sufficient degree of transparency.

Hon. Elly Karuhanga, Director of Tullow Oil Uganda and Chairman of the Uganda Chamber of Mines and Petroleum, brought in the perspective of the private sector. He emphasised the need for a cordial and fruitful cooperation between the government and the private sector. The “sensational debates and public allegations” and the delays in expediting the oil and gas agreements and policies had led to uncertainty and frustration on the side of the private companies. He commended the useful recommendations brought forward by Mr. Nore and Dr. Suruma and emphasised the need for capacity building and training of skilled workers in order to fully exploit the economic potential of the oil sector.

As a representative of civil society, Dickens Kamugisha, Chief Executive Officer of the Africa Institute for Energy Governance (AFIEGO), urged the relevant government institutions to ensure transparency and an effective involvement of all stakeholders. He concurred with Mr. Nore’s and Dr. Suruma’s arguments and highlighted the need for effective training and building of expertise to strengthen the downstream sectors and increase employment, especially for the young population.

The following open discussion with the invited guests centred around issues of transparency and accountability in the oil sector, the need for infrastructural development and capacity building, the question of whether to directly involve the Ugandan people in decisions concerning the use of the oil revenues, and the importance of striking a balance between private interests, public goods and welfare.

In her closing remarks, the Guest of Honour Hon. Amelia Kyambadde, Minister of Trade, Industry and Cooperatives of the Republic of Uganda, pointed out a number of challenges such as the lack of capital, inadequate infrastructure, corruption, limited skills in the workforce and an “over-politicisation” of the topic of oil in Uganda. She however stated that she was optimistic that the country “will grow economically and socially to fully benefit the people of Uganda” if these challenges are handled well. She emphasised that addressing the challenges would require more consultations with all relevant stakeholders, a better awareness on oil issues among the population, enhanced efforts for training and capacity building, investment in infrastructure development, and a “multi-sectoral approach to the oil industry”.

At the end of the event, speakers and audience alike emphasised the need for a continued dialogue on the topic. KAS and UNCCI were commended for having organised this unique conference which for the first time brought together such a diversity of stakeholders and high level representatives to discuss fundamental issues related to the chances and risks of oil production and oil revenue management in Uganda.

Keynote Presenter Petter Nore from Norway lauded the spirit of the discussions and stated that he was impressed by the “intensity and openness of the debate in Uganda”. He urged Ugandans to keep up that spirit but to also move beyond the discussion and “let the words be followed by actions”.

The presentations and results of the discussion will soon be published in a detailed conference report.