Training Series on Good Governance and Accountability Concluded in Soroti

by Mathias Kamp
The series of training workshops conducted by KAS and ACFODE under the EU-supported project “Action for Strengthening Good Governance and Accountability” has recently been concluded with two training workshops for local councillors and civil society actors in Soroti district.
April 30, 2012 Ordering Information

Prior to the workshops in Soroti, teams of KAS and ACFODE had undertaken the trainings for councillors and civil society representatives in 10 other districts across the country. The successful conclusion of the training series forms a basis and starting point for further activities under the project which will actively involve the participants of the trainings.

From 22nd to 24th April, the elected representatives at district level – all members of the district council – were taken through an intensive training programme on issues of good governance and accountability. Particular focus was put on the roles and responsibilities of elected leaders at local level and their link to the citizens they represent. After a number of training sessions on concepts related to democratic governance and human rights, the councillors took stock of the situation at the local level. During lively discussions and group work sessions, they identified crucial challenges with regard to good governance and accountability in Soroti district and suggested remedies to those challenges. By the end of the training, the participants had identified concrete action steps towards improving their performance as representatives and strengthening their links to the electorate. A declaration of commitment to the promotion of good governance and accountability was signed by all participants at the end of the training.

The Country Representative of the Konrad-Adenauer-Stiftung, Dr. Angelika Klein, who attended the entire training workshop, commended the councillors for their active participation and the vibrant and constructive discussions. In her concluding remarks, she stated that the level of interest, passion and commitment to democratic values and principles that was displayed by the councillors during the training was exemplary and encouraging.

The speaker of the district, Andrew Odongo, expressed his gratitude on behalf of the council. He applauded KAS and ACFODE for the project and the concept and content of the training which he considered to be extremely helpful in empowering the councillors and equipping them with the knowledge and skills to become better representatives.

Immediately after the workshop for councillors, representatives of different civil society organisations working in the area of democracy promotion in Soroti district came together for a three day intensive training of trainers programme from 24th to 27th April. The training consisted of three major parts. In a first step, participants were taken through basic concepts of democracy with a particular focus on the specific situation at the local level. The second day was then dedicated to equipping the participants with the required skills to be able to share the knowledge and to become effective trainers themselves. The workshop culminated in the formation of groups of trainers who developed their own training concepts for reaching out to the grassroots population. Subsequent to the workshop, all groups will be facilitated by KAS and ACFODE under the EU-supported project to carry out initial trainings at grassroots level. The trainings will provide an opportunity to apply and test the “Civic Education Toolkit” that was specifically developed for the project. In the next phase of the project, the trained trainers will come together at the regional level to review the initial grassroots trainings, share experiences and best practices, and to develop strategies for future training activities. 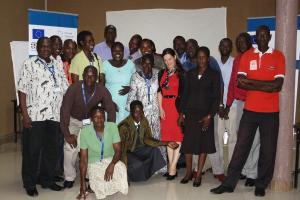