by Yusuf Kiranda
Former Ghanaian President H.E. John Agyekum Kufour has underscored the centrality of good governance for Africa to avoid the so-called natural resource curse. He was delivering a public lecture at Makerere University on the invitation of the Konrad-Adenauer-Stiftung and Makerere University.
August 4, 2013 Ordering Information

“There is nothing like a natural resource curse, there can only be governance curse.” These words were part of the remarks emphasised by the former Ghanaian leader while delivering a public lecture on the topic: “Oil Resource Management and its Utilisation for Economic Transformation”. He was responding to wide-ranging concerns over the so-called oil resource curse – which has affected several (African) oil producing nations. H.E John Kufuor is internationally admired for his role in the democratisation and development of Ghana where he served a two term presidency and successfully presided over the second peaceful democratic transition. His counsel carried significant contextual relevancy to Uganda at the time when democratic transition is being extensively discussed and where several governance topics are still foreseen to impact on the management of the country’s oil resources.

In the year 2006, after long periods of official suspicion, Uganda made its first commercial discovery of oil. It is presently estimated that the country’s commercially viable oil reserves are at 3.5 billion barrels – a figure which is expected to rise with the continuing explorations. According to experts the country could potentially be heading to rank among the top 50 oil producers in the world. Since its discovery in Uganda oil has become the one and major factor dominating discussions about the country’s economic future. There are very high expectations of an economic boom and many Ugandans hope that the oil revenues will soon boost the development of the country. However, such expectations cannot be taken for granted, given that there are several examples of countries that have and exploit oil but continue to experience the opposite effect: that Oil production can even worsen the state of an economy and turn into the so-called “resource curse”. The decisive question for Uganda’s economic future therefore is: How can oil production and revenues be managed meaningfully and sustainably in order to improve the overall economic and social situation of the country? How can the “curse” be prevented and the newly discovered resource become a “blessing” indeed?

It was on the premise of the above that Makerere University in cooperation with Konrad-Adenauer-Stiftung (KAS) dedicated part of its 90-years celebrations to high level exchanges on the topic of oil resource management and its utilisation for economic transformation. In the same line, KAS was also deepening its focus on the topic and continuing the series of dialogues on “Oil Production: Lessons Learned from…” initiated 2012 with the example of “Oil Production in a Social Market Economy: The Case of Norway”. The exchange with H.E. John Kufuor was intended to build up on previous success and set new parameters for the next dialogue to come.

The public lecture at Makerere University was a highly successful event attracting an audience of over 500 guests. Among them were cabinet ministers, members of parliament, academics, civil society actors and students. It was a lively and intense exchange which quite clearly indicated the passion the Ugandan elite has about the nation’s oil resource. On the other hand, the discussions demonstrated a general pessimism on the side of many regarding whether the oil will be effectively managed and if it will contribute to economic and social transformation.

There was a general convergence on the question of good governance as being essential for Uganda to achieve effective oil resource management. The focus was on the urgent need to end pervasive corruption in the public sector and to promote transparency in all sectors including oil as well as the need for genuine democratic practice – which includes the culture of peacefully transferring politic power from one person to another. The Ugandan Prime Minister Hon. Amama Mbabazi who offered the closing remarks highly appreciated the support of Makerere University and Konrad-Adenauer-Stiftung to the oil and governance discussion in Uganda. 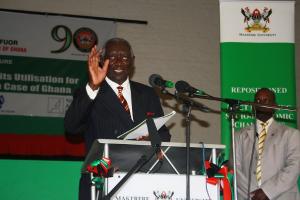