INCLUSIVE ECONOMIC GROWTH: LEAVE NO ONE BEHIND

On the 22nd July 2016, the LéO Africa Institute in collaboration with Konrad-Adenauer-Stiftung, Uganda organized the third annual Economic Forum on the theme: “Leave no one behind: Promoting inclusive economic growth & decent employment for all by 2030”
July 22, 2016 Ordering Information 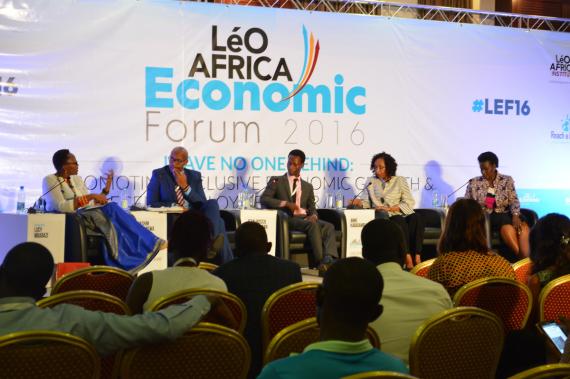 Caroline Angolere, a young female entrepreneur from Karamoja gave a powerful commencement address which ignited the flames of the Economic Forum. In her address filled with remarkable experiences of courage, hope and hard work, Caroline asked the audience to change their narrative about Karamoja, which is known for its remoteness. Karomoja she notes, ‘is prepared to reclaim her space in the economics of the Uganda and people like me are there to champion this movement’.

Caroline’s address was followed by a panel discussion centred on “The role of government, the private sector and development partners in advancing Inclusive Growth that creates jobs.” The session was well-balanced by a panel comprising of the Managing Director of Stanbic Bank, Patrick Mweheire, Mr Silver Kayondo a distinguished LLM student, Ms Lucy Mbabazi, the country Manager of Visa Rwanda and Mr Michael Mugisha, a Research fellow at Centre for Development Alternatives.

Each panelist was given 5 minutes to give their maiden views on the matter of discussion before the moderator tasked them with different questions. All the panelists spoke with profound passion and authority on the topic in question. Mr Mweheire emphasized the role of Agriculture in the movement towards economic development for a country like Uganda which boasts 40% of the arable land in East Africa. “Let all the stakeholders, that is, private sector, development banks, insurance companies and the government, get in a room and come up with a sustainable agribusiness financing plan. That is our winning ticket.” Mr Patrick Mweheire asserted. However, Mr Silver Kayondo, cited that the biggest plague affecting our economy is Youth Unemployment, who account for 78% of the general population, and agriculture does not seem to be a choice of entrepreneurship venture for them. “True, agriculture is a game-changer for the youth, but there are cultural and attitudinal perceptions which lead young people to sell off fertile land to venture in bodabodas, import businesses and the like.”

Ms Tabifor, Deputy Country Representative, United Nations Population Fund noted that growth is inclusive only if it results to wider access to sustainable socioeconomic opportunities for the majority, while protecting the vulnerable. She further observed that if growth is inclusive, then it must take place in the sectors which accommodate the poor; it must occur in rural areas where majority of the poor live; and must use the factors of production that the poor possess or can access.

On Inclusive Growth and Employment Creation, Enock Nyorekwa Twinoburyo; an Infrastructure Economist stated that Uganda as a country needs a pragmatic policy shift which is holistic and focuses on existence of strong public financial institutions. He believes that the economic problems in the country which are structural need long term solutions.

Dr Madina Guloba another Economist from the EPRC questioned the links to the growth aspects at the upstream. According to her, the reason why we do not have inclusive growth in Uganda is that many policies designed at the macro level do not reach the intended beneficiaries at the micro level. She also mentioned that the problem In Uganda is not unemployment but under-employment. She believes that most youth graduates do not get full time job in spite of having the required eligibility which is attributed to the supply of workers/graduates which is greater than the demand for workers.

Dr. Moses Bekabye, Technical Advisor at the Ministry of Finance acknowledged that Uganda has a lot of economic challenges but not at the level at which the country was at 30 years ago. He noted that since 1986, Uganda has transformed from nearly a failed State as a result of various brutal dictatorship since independence in 1962, to a country that has achieved consistently high economic growth rates and significant reduction in poverty levels which have reduced from 53% in 1986 to 19.7% today.

Paul Mullard a Senior Economist at DFiD noted that the problem with Uganda is the interference of politics into the running of public institutions. He recommended that Small and medium-sized enterprises (SMEs) which represent over 60% of businesses in Uganda need to be supported through growth and innovation.

The conversations on regional integration also ushered in new perspectives on economic opportunities within the East African region. Asked how how Uganda will finance its ever increasing debt, when the tax to GDP ratio is a paltry 12%, Yusuf Kiranda, a PfAL Fellow at LSE posited that he believed fundamentally, that integration should be pursued not as a political project but as an economic one to enable intra-state trade and embark on infrastructure projects to facilitate business interactions. He said however, that since Infrastructure projects take long to pay back, they require patient capital, with low interest and a long payment period.

Discussing “The Role of Financial Institutions in Financing of Small and Medium Enterprises (SMEs) in Uganda.” Dr Maggie Kigozi the Director of Crown Beverages explored with her panel how SMEs can access capital to for increased growth and investments. Mr Kaggwa started off by affirming that SMEs are a critical part of the Ugandan economy because they account for the 70% of GDP informal sector as well as the 21% of GDP that is the agriculture sector. Evelyn Omala then shared one of the key pieces of insight on that day, something that forced those available in that room to realise that effective communication is majorly lacking in our economy and Uganda as a whole. She went on to state that the youth currently lack extended vision and “the bigger picture” in terms of generating business ideas that adhere to sustainable development goals and targets. Winnie Kyiryabwire cited the frustration of struggling entrepreneurs by the exaggerated bureaucracy of Microfinances which when coupled with the existing economic bottlenecks like bad weather for farmers and lack of collateral, discourages attempts at securing loans altogether.

Mathias Kamp, KAS Country Representative reiterated KAS’ commitment to championing decent work and inclusive economic growth for all. He maintained that inspite of the numerous challenges faced by the Ugandan youth, there are still lots of opportunities that can be exploited and both the government and the private sector can play a role in harnessing this opportunity.

His statements were followed by the Minister of Trade and industry; Hon Amelia Kyambadde who reiterated that the government is doing a lot of work which many times are shadowed by the expansive informality of the economy. She citied causes of youth unemployment to include inadequate investment, supply side of jobs, insufficient employable skills amongst others. However, Hon Amelia informed participants of some of the government interventions such as the Youth Livelihood Program, KIIRA EV and Kayoola projects initiated by Youthful engineers at Makerere University which government has rendered support to, etc.

The last panel hosted Jean Bosco Nzeyimana, the founder and CEO Habona, Anne Kabagambe; Chief of Staff, African Development Bank, Hashim Mulangwa, Economist and Development Consultant and it was chaired by Lucy Mbabazi. In response to Hon. Amelia’s remarks, Hashim noted that Uganda seems to be locked up in the stabilization stage. Hashim went on to ask; “What are the institutional mechanisms you are putting in place to ensure that you can actually create change, are the policies we are implementing going to create the change we want?"

As a way forward, Jean – Bosco stated that the only way to create change is to get youth included in institutions at all levels in order to make them be able to take lead in tackling the challenges they face. 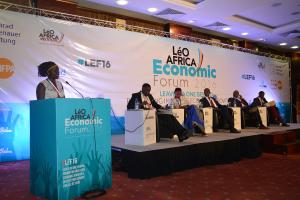 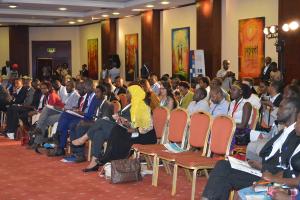 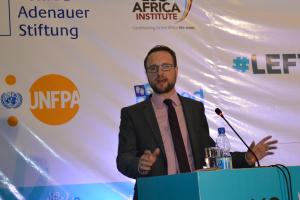 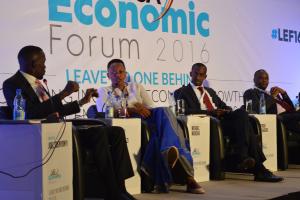