At a roundtable discussion held on Thursday, 23rd November 2017 in partnership with the University Forum on Governance (UNIFOG) at Makerere Institute of Social Research – Makerere University, youth upheld the need to expand their participation outside the boundaries of political parties.
November 29, 2017 Ordering Information

The roundtable discussion was attended by selected youth leaders from political parties, civil society and academia to discuss way of enhancing their influence on the political and development decisions in the country. It followed a national wide engagement with youth in Universities and local youth leaderships on “youth participation in political parties in Uganda”.

It should be noted that Uganda has one of the youngest populations in the world whose voices should be included in national policies and programmes. Statistics from the Uganda bureau of statists (UBOS) population estimates 2017, indicates that of the 37.6 million, youth aged between (18-30 the official age bracket for Uganda) constitute 22 percent which translates 8.2 million.

Moreover, the percentage population of children is estimated at 55 percent an indication that the number of youth in Uganda will continue to rise in the coming years. That noted, youth in Uganda are faced with challenges of underemployment, limited access to quality services like education and health care. This has continued amidst legal reforms that have achieved commendable youth representation at the different levels of national decision-making levels. For example, youth are represented at parliament, local councils, and also have an independent body - National Youth Council (NYC). It is therefore, puzzling that even with all these spaces, policy outcomes do not address the challenges youth face.

It is on this backdrop that UNIFOG and KAS engaged youth around the country in region youth debates and the roundtable discussion to together with the youth discuss ways of bridging the gaps in youth participation in political and development discourses in country.

The roundtable discussion therefore, built on the views from participants during the regional discussions conducted under UNIFOG, KAS partnership. Views from the regional engagements were presented by Ayub Kiranda a programme Manger and UNIFOG. From the report, two divergent views on youth participation in political parties emerged. On one hand, youth felt political parties have provided adequate space for their participation but they (youth) lack economic empowerment and other critical skills required to effectively participate in political process.

It was reported that the high level of youth underemployment has caused youth poverty which has limited youth from standing for certain elective offices due to the high nomination fees and the commercialised campaigns. It was also noted that youth poverty has made youth susceptible to the clientatlist politics where they are paid to support political interests of the political elites in the country. The other skills youth are said to be lacking include; public speaking, mobilisation, organising and negotiation skills.

On the other hand, some youth reported that the space provided by political parties are not sufficient to facilitate youth meaningful participation in the decision-making process. They argued that these spaces have created a “silo of youth engagements” where youth speak and interact with fellow youth with limited engagements with the senior politicians from whom they can learn. They also reported limited if any funding to the youth leadership in the political parties, let alone a clear mandate on what they are supposed to do as youth leadership.

From the above arguments youth felt that youth participation can be enhanced by developing the full potential of young people through education and acquisition of the knowledge and expertise required for the full, active and high-quality involvement of youth in society. At the same time, making political parties strong and effective with the inclusion of youth in the mainstream leadership in both political parties. They argue that youth should aspire to constitute a specific percentage of the mainstream leadership in political parties, local government and other leadership platforms where they can take up responsibilities and freely interact with the senior leaders.

Participants at the roundtable discussion were cynical about having well-functioning political parties in Uganda in the near future, but still felt the strong need for youth to fully participate in the political and development processes in the country. They argued that youth participation should not be limited within the political party borders, rather should include participation in informal organisations at the grass root as well as religious establishments. Through these platforms, it was discussed that youth can help empower fellow youth and impact on the general community which can also help increase public confidence and trust in youth. They emphasised that much as political parties are fundamental for any functioning democracy youth can continue operate outside the confines of their parties to influence decisions while at the same time work to make their parties function better.

Participants also noted the need for youth to be trained on the how effective political parties work. This was reported to shape proposal youth make to better the functioning of their parties. At the same time youth need to mobilise each other and take advantage of their numbers, their vigour to cause reforms within the parties and shape the political and development agendas of their parties and country.

The discussion was also attended by Mr. Byamugisha Moses who was a candidate for the Forum for Democratic Party (FDC) presidential elections. Mr. Byamugisha argued youth should join political parties within ideas that they want to see their parties adopt. He observed that parties may take the directions they want to see them take until they chose to join them and drive the change from within. He also pointed out the need for political parties to establish party policy think tanks which will generate convincing policies and attract more supporters. He agreed to the gaps within political parties especially in engaging the young generation but noted that the gaps will not be bridged until youth take it as their responsibilities to have well structure and managed political parties. 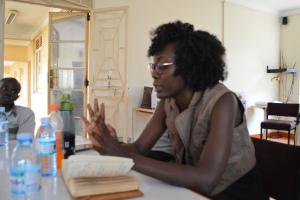 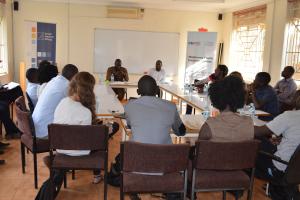 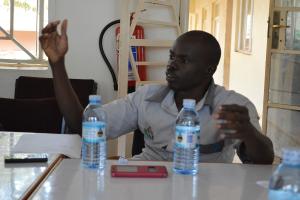 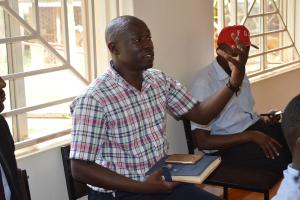 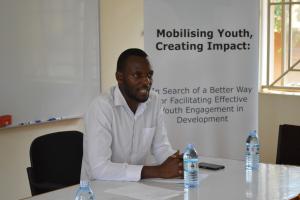