The workshop in Kiboga, which took place from 14 to 16 of April, is the first of a series of workshops which focus on equipping aspiring leaders with skills and information on their mandate and as such support them to design their campaigns along achievable outcomes in relation to their mandate as women’s representatives and female political leaders.
April 27, 2015 Ordering Information 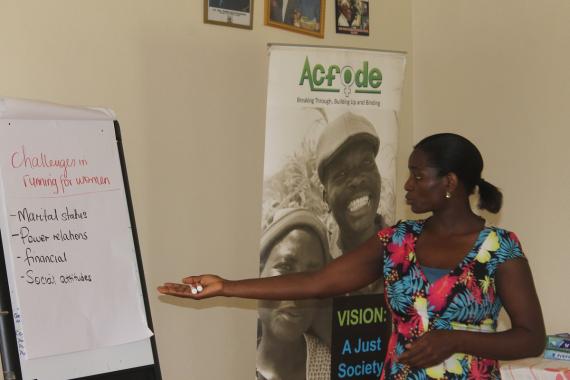 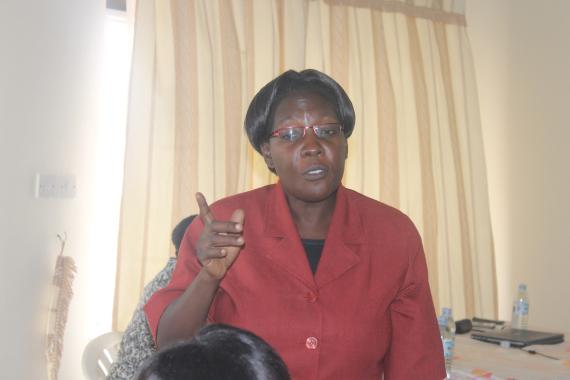 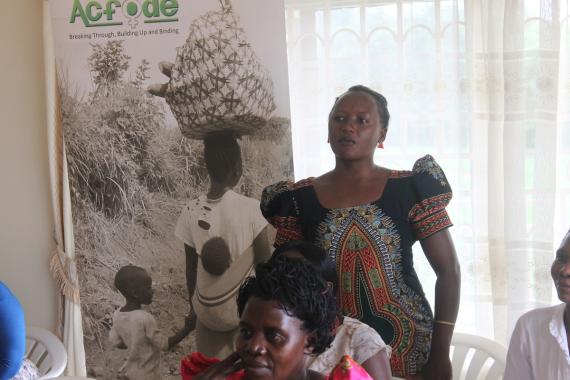 .. involve the participants in lively discussions... 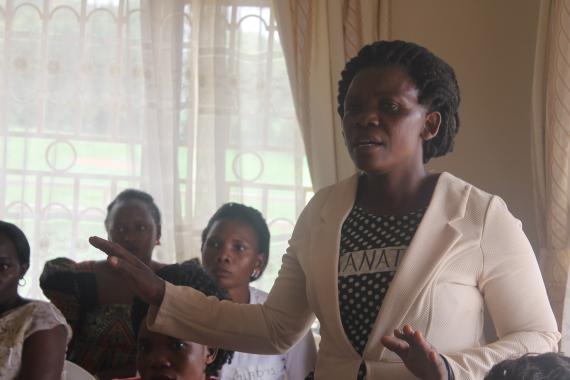 ... on questions of campaigning, public relations, the media, and the electoral process. 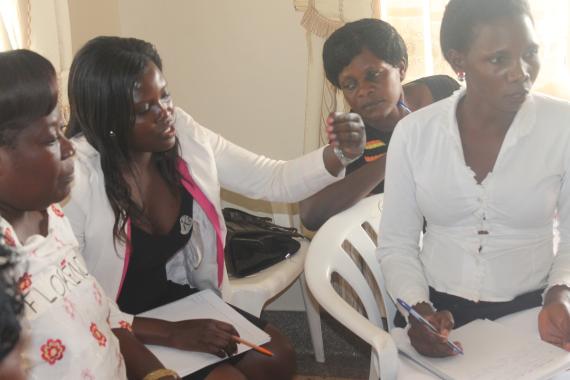 The participants, among them aspiring Women MPs,... 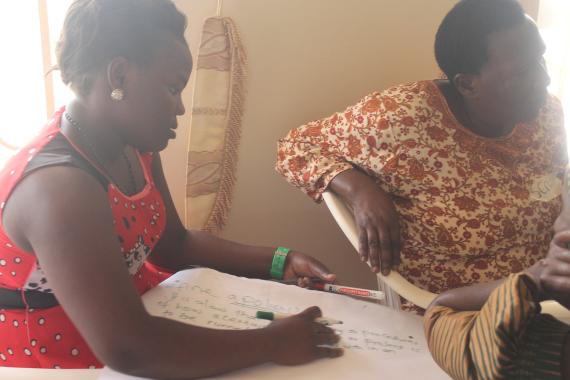 ... were asked to do group works on public speaking in council and their constituency. 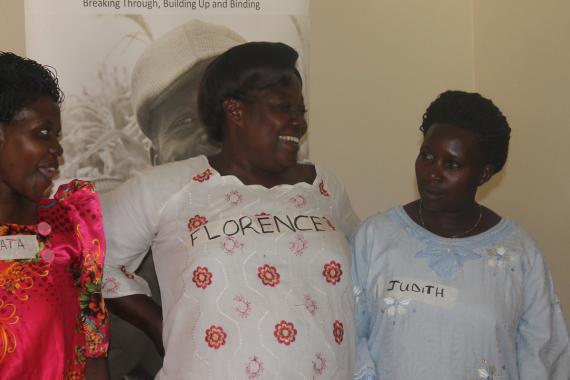 The group work was presented and discussed in a cheerful and productive atmosphere. 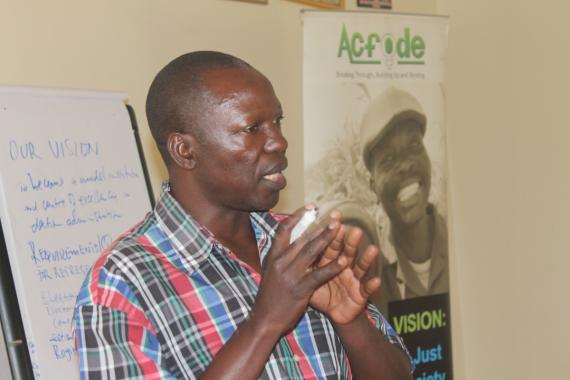 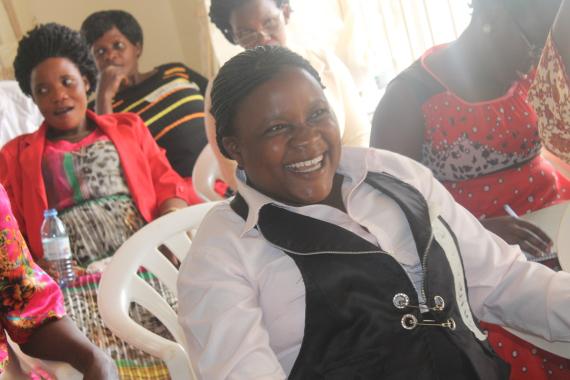 The participants stated that they enjoyed the workshop and learned a lot about campaigning and politics in general.

The Konrad-Adenauer-Stiftung (KAS) and Action for Development (ACFODE) have been working together in areas of women empowerment and the strengthening of human rights. In the 26 years of partnership, the two organisations were putting a continuous focus on enhancing women’s participation in the political processes of the country and capacitating women in politics, especially on the local government level. The workshop in Kiboga, which took place from 14 to 16 of April, is the first of a series of workshops which focus on equipping aspiring leaders with skills and information on their mandate and as such support them to design their campaigns along achievable outcomes in relation to their mandate as women’s representatives and female political leaders.

Uganda's affirmative action laws which cater for female representatives at all levels of governance have increased the number of female politicians in parliament and local councils significantly. Female politicians at the national level have embraced their newly acquired status and recognition to affirm their visibility on the frontline of political participation and engagement to push for gender sensitive legislation. Equally at the local councils, a few of the women councilors have tried to emphasize legislation on gender based violence (GBV) and delivery of services to key sectors that affect the advancement of women and girls through enactment of by-laws and gender responsive budget allocations where women and girls’ sectors of interest have been prioritized. In spite of the registered achievements especially of increased numbers of women engaged in political decision making processes, a number of challenges still affect the effectiveness of female politicians such as institutional bias, stereotyping, poor internal democracy of the political parties, weak electoral laws, violence targeting women, high poverty levels amidst a highly monetized political setup, characterized by high levels of corruption and unethical practices, and lack of sufficient resources to run successful political campaigns, which hits women even harder as they have limited access to the resources which are available.

With the 2016 general elections nearing, a special focus needs to be put on preparing the female contestants for the campaigning and electoral periods. Faced with financial and cultural constraints as well as an institutional setup that provides for bigger constituencies for women councilors than for those competing for open seats, women are often discouraged from striving for political offices on higher levels. Furthermore, they often encourage discouragement from their families and friends.

The participants in the workshop in Kiboga were councilors from all local government levels - from the village up to the district level - who wanted to stand for a higher office as well as women who had made the decision that they were going to stand for elections for the first time.

A positive symbol for fair democratic competition in Kiboga was the fact that some of the participants explained that their competitors were also part of the workshop. How to engage in fair competition and not take political struggles personally was exemplified by the case of three district women councilors who had decided to stand as woman Members of Parliament (MP) for their district in the general elections in 2016.

The facilitators of the workshop, Ms. Gladys Nairuba, Gender Project Manager with the Anti-Corruption Coalition Uganda, and Ms. Carol Idembe, Gender and Advocacy Specialist with the Inter Religious Council of Uganda, emphasised strongly that the participants should not be discouraged by anyone from running for political office. However, they should be aware that their personal life, such as the questions if they were married or if they had children, might be discussed publicly. They also stated that these were some of the first questions many female politicians had to face when declaring their intention to run for office – the first instance in which the double standards used for assessing male and female politicians in Uganda would become obvious. Therefore, the participants were reminded that even though they stood in competition with other women, they should not engage in gender-biased campaigning and target their competitors on a personal level but instead focus on problems of and solutions for their constituency in their campaigning efforts.

Mr. Erasmus Kimbowa, District Registrar of Kiboga District, introduced the participants to the Uganda Electoral Commission Road Map for the 2016 General Elections and the Electoral Code of Conduct (the Road Map can be accessed here). During his presentation, the question why women councillors and MPs had to cover bigger constituencies than their counterparts who were elected on open seats (which are still in most cases male candidates) came up. In the course of the discussion that followed that question, the only possible way forward that was identified were concerted advocacy efforts on the side of female politicians on all government levels. Besides this specific topic, the issue of self-empowerment and changing of mind-sets was an overarching theme of the workshop. It was emphasised that only today’s women were in a position to change the environment in which their daughters would live in the future and that these changes would have to be initiated in the world of today.