A Symposium conducted by KAS raised a vibrant discussion on the challenges and successes of the five-year-old multiparty democracy in Uganda.
October 27, 2010 Ordering Information 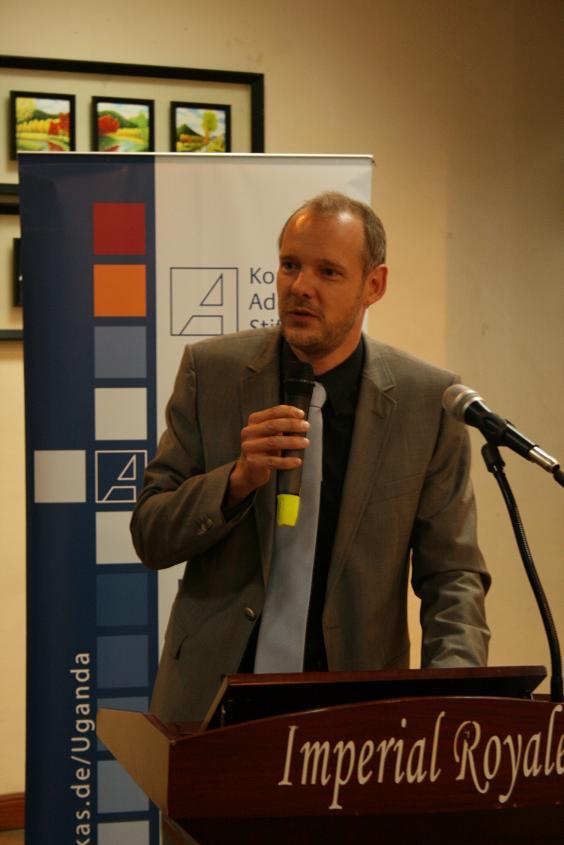 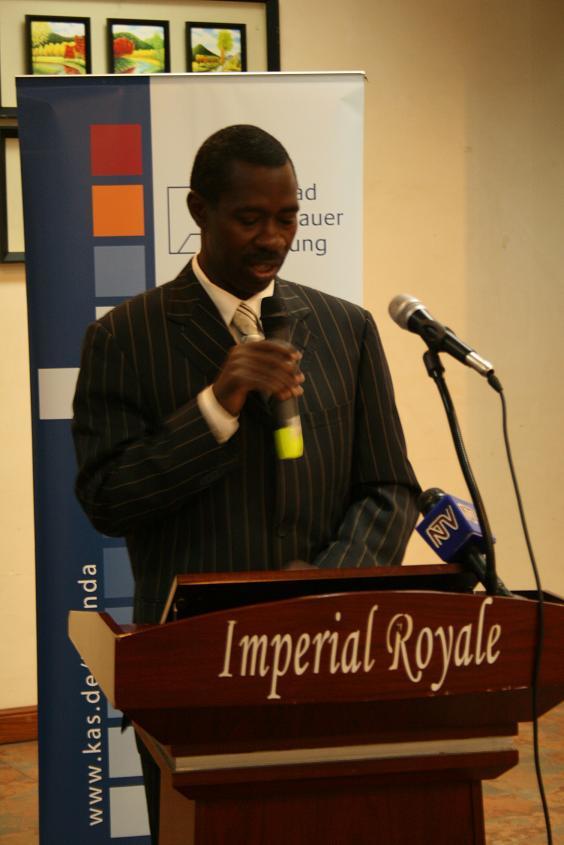 -
Hon. Kakooze, Minister of State for Public Health delivered the opening remarks on behalf of the Prime Minister 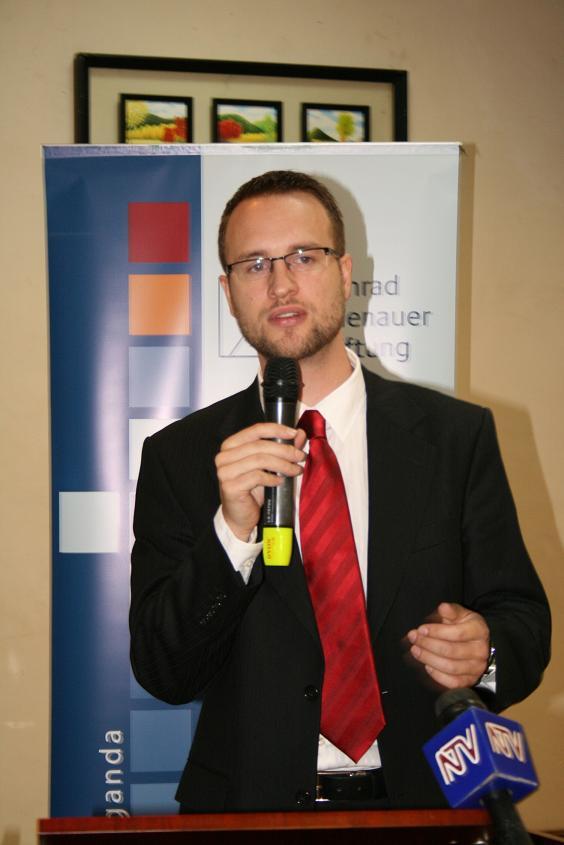 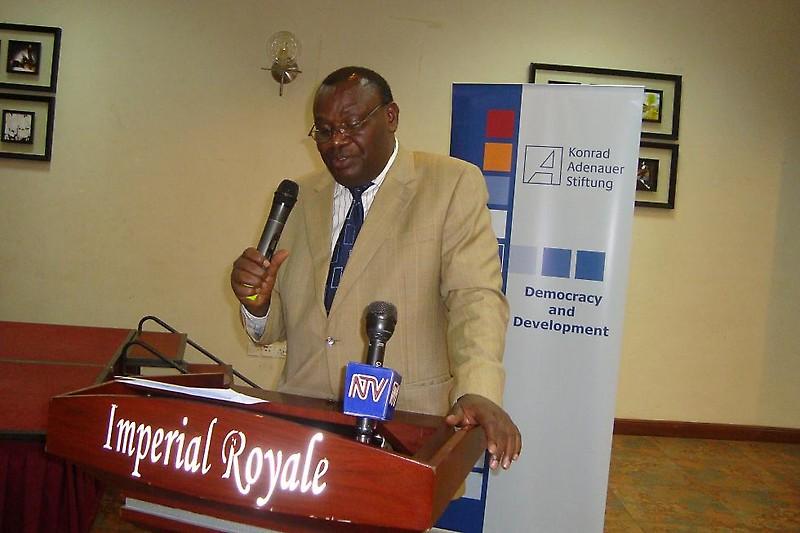 -
Dr. Sabiti Makara gave an outlook on the challenges and prospects of of multiparty democracy in Uganda 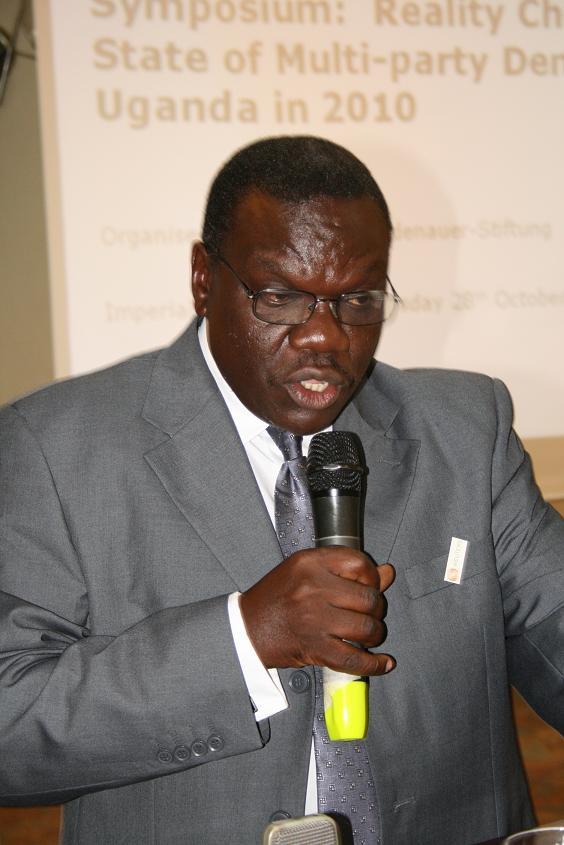 -
In his presentation, Prof. Yasin Olum focussed on the aspects of checks-and-balances and level political playing field 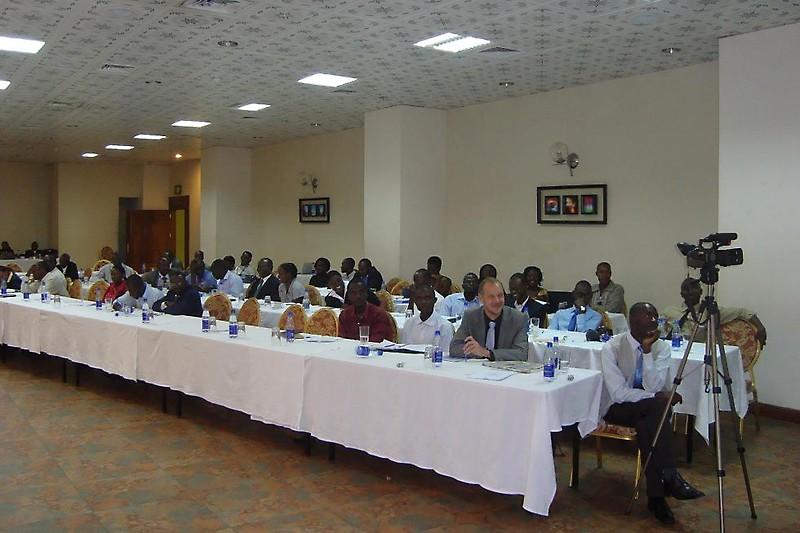 -
Participants at the symposium held at Imperial Royale Hotel, Kampala, on 28th October 2010 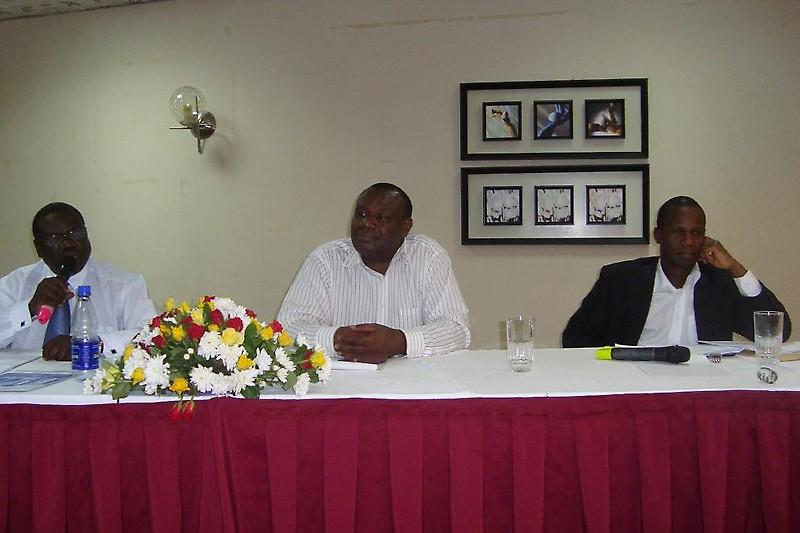 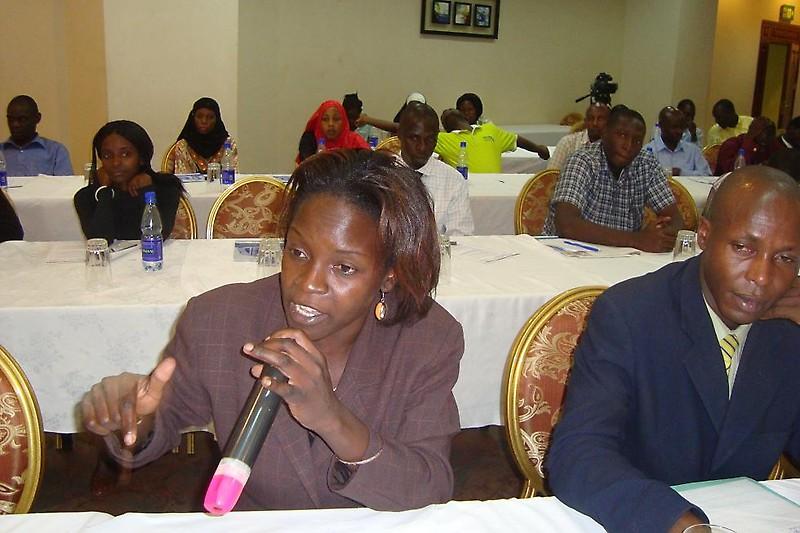 -
The presentations triggered a lively debate among participants 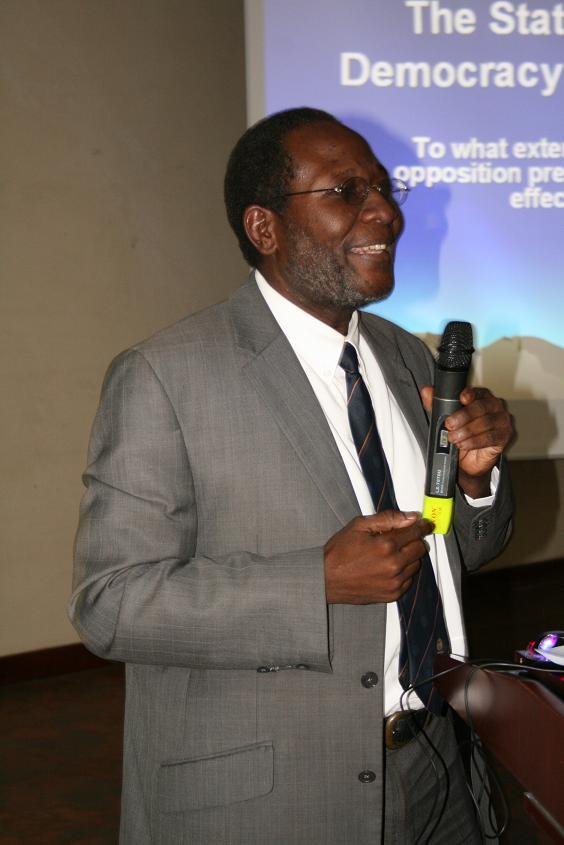 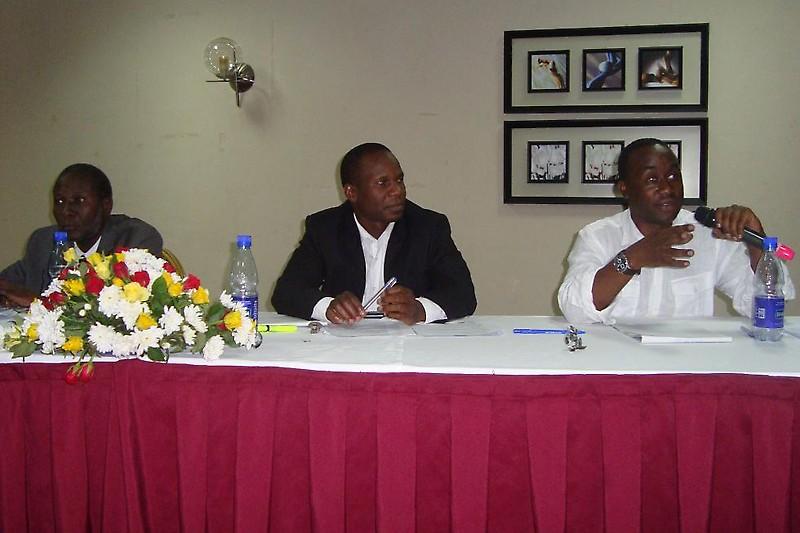 -
Awel Uwihanganye (right) defended the position of the NRM government

The one-day symposium entitled “Reality Check – The state of multiparty democracy in Uganda in 2010” brought together politicians, representatives of the media and civil society as well as academicians in order to assess the state of multiparty democracy in Uganda through inputs from experts and an interactive dialogue. Among the many participants were representatives from both sides of the political spectrum - supporters of the NRM as well as the opposition parties. The lively and at times controversial debate exposed the diverging opinions and assessments of the situation in Uganda. While supporters of the NRM government emphasised the achievements of the last years and accused the opposition parties of “complete failure”, the supporters of the opposition complained about a lack of democracy, particularly manifested in the authoritarian leadership style of the NRM and unfair political competition.

The year 2010 marks the five-year anniversary of the legal reintroduction of multi-party democracy in Uganda following a national referendum in 2005. With the second presidential and parliamentary elections after the return to a multi-party system taking place next year, assessing and discussing the extent to which multi-party democracy has truly been established in Uganda since 2005 was considered a timely endeavour.

The 1995 constitution granted the Ugandan citizens the right to take ultimate decision thrpugh a referendum whether to be governed under multi-partyism or under a different political system. In the first referendum in 2000 the majority still decided against the multi-party system. However, five years later the situation had changed – partly due to a string campaign by the NRM – and a majority of more than 90% voted in favour of the introduction of multipartyism. Five years later the young multiparty system is confronted with numerous challenges on the way towards democratic consolidation.

The symposium was divided into two sessions, each of which consisted of two presentations from experts and practitioners and a subsequent open discussion. All presentations were based on elaborate papers which are going to be compiled in a publication.

The first session was dedicated to an assessment of the developments of the past years and the current situation with regard to the legal and institutional context from an academic perspective.

In his introductory remarks, Mr. Mathias Kamp, KAS Project Officer, emphasised that in order to undertake the “reality check”, the assessment of the state of multiparty democracy in Uganda it is important to take a look at four important dimensions:

1.The legal fixation of the political system,

2.The reflection of the pluralistic democratic system in the institutional set-up,

3.The adherence of democratic principles by the major political actors,

4.The acceptance of the democratic multiparty system by the population and the development of a “democratic culture”.

Furthermore, he noted that while there are different types of party systems even in consolidated democracies (ranging from two-party-systems to fragmented party systems), what most of them have in common is that they are balanced to a certain degree, with changes in power being more than just a theoretical option. This according to Kamp distinguishes them from many party systems in Africa, including Uganda, which can be described as “imbalanced” since they are characterised by a permanently dominating ruling party facing a very weak opposition. In Uganda, where the current multiparty system is still young and developing, different reasons can be brought forward in order to explain this imbalance, depending on the standpoint of the observer. Kamp noted that the arguments range from historical explanations (negative experiences with multipartyism in the past), complaints about undemocratic tendencies and manipulations by the ruling party, to accusations of inability, internal quarrels and disunity of the opposition which allegedly fails to present itself as a real alternative. According to Kamp, the symposium provided a welcome occasion to enter into a dialogue and exchange these views and arguments.

In the first presentation, Dr. Sabiti Makara, political scientist at Makerere University, undertook a detailed analysis of the Ugandan democratisation process and the introduction of the multiparty system. While generally acknowledging some laudable democratic developments, Makara identified a number of challenges for the consolidation of multiparty democracy and the guarantee of fair political competition.

He noted that in the current practice this fair competition was still significantly limited, on the one hand because of the instrumental use of the state apparatus to the advantage of the NRM and interference with democratic rights, but on the other hand also because of a weakness of the opposition parties which manifests itself in poor financial resources and grassroots structures and a lack of elaborate programmatic profiles.

Makara concluded that the weak institutionalisation of the party system in Uganda, characterised by weal links between the parties and the population, authoritarian leadership style, internal wrangles within the parties and a lack of programmatic alternatives, poses a serious obstacle to democratic consolidation in the country.

His colleague Prof, Yasin Olum, another Makerere political scientist, in his presentation focussed on two crucial factors for the consolidation of multiparty democracy: the guarantee of checks and balances and a level political playing field. For both aspects, Olum identified serious weaknesses and challenges in the Ugandan context. The separation of powers and provision of checks and balances, which is an essential feature of any genuine Presidential democratic system, according to Olum is only partly ensured in Uganda and indeed undermined by a number of factors such as the presence of cabinet ministers and army representatives in parliament and the “fusion between the NRM party and the state”.

He stated that the political competition was not based on a level playing field and that the opposition parties were seriously disadvantaged compared to the ruling NRM. The competition was characterised by confrontational and conflictive conduct and the unwillingness of the NRM to even acknowledge the possibility of a change in power. According to him, the level playing field is undermined by the dominance of the NRM, particularly with regard to the financial situation due to an exploitation of state resources, as well as the circumcision of basic democratic rights such as the freedom of opinion and the freedom of assembly. Furthermore he stated that the contested impartiality and independence of the Electoral Commission could pose a serious threat to the fairness, credibility and acceptance of the coming elections.

In the subsequent discussion some participants expressed support for the arguments brought forward by the two scholars, while others rejected their analysis, Supporters of the NRM government defended the historical achievements of the NRM as a movement and later as a political party. It was argued that the NRM brought the country stability and facilitated democratic reforms. It was emphasised that democratic reforms would need time and patience and that Uganda could not simply be forced to copy a Western style democracy. Thus, as one participant put it, the explanations of the two political scientists on democratic principles would sound nice in theory but could not easily be applied to the Ugandan context.

Focus on the Actors: Political Parties

In the second part of the symposium the focus shifted from the contextual analysis to the major actors, the political parties. Particular attention was given to the question to what extent the Ugandan opposition offers a viable alternative for effective governance.

In his introduction of the topic, Mr. Yusuf Kiranda, KAS Programme Officer, explained that the political opposition always has to be considered a “government in waiting” - which legitimises the question in how far the opposition in Uganda fulfils this role. He also emphasised that in the ideal case the parties should all fulfil some basic democratic functions, namely the reflection, channelling and articulation of the interests of the citizens.

The Perspective of the Ruling NRM

Mr. Awel Uwihanganye of TETEA Uganda, a consultancy firm, took over the perspective of the NRM and was sceptical towards the ability of the opposition to provide a viable alternative to the current government. According to him, the opposition parties are internally divided, suffer from weak structures and are mainly formed around few individual leaders. The main objective was the obsession with the idea of ousting the NRM government. For this purpose the opposition parties wouldn’t even fear to trigger conflict and violence through their irresponsible rhetoric. He argued that the opposition parties had been busy attacking the NRM while neglecting the development of functioning party structures at the grassroots level and the formulation of programmatic alternatives over which they could have a constructive dialogue with the government. According to Uwihanganye the opposition parties are lacking ideological orientation and are still oriented along ethnic and religious lines while at the same time being under massive influence from abroad through the support from Western donors.

His views were strongly opposed by Mr. Omar Kalinge-Nnyango form the Justice Forum (JEEMA). He blamed the “increasingly dictatorian leadership” by Museveni and the NRM and the restriction of democratic rights for the weakness of the opposition in Uganda

In his view, the political parties could not easily by categorised according to religion or ethnicity anymore, Instead, all political parties had strengthened their national character. Despite the “defamation campaigns” and the negative interference of state organs, particularly police and the army who wouldn’t even fear to violently interrupt or disperse opposition rallies, the parties had been successful in deepening and expanding nation-wide structures. With experiences leaders and clear programmatic alternatives, according to Kalinge, the opposition despite facing many challenges “provides, to a great extent, a viable alternative for effective governance”.

The two presentations were again followed by a lively and controversial debate, which at times was characterised by mutual accusations between supporters of the NRM and the opposition parties. However, a particular focus was also on important policy fields, particularly health and education, and participants commented on the achievements as well as shortcomings of the NRM government and the alternative policy proposals brought forward by the opposition. Representatives of civil society called upon both sides to focus on important national issues and the needs and demands of the people instead of being permanently involved in political conflict.

All in all, the symposium was welcomed as an important opportunity for debate and dialogue. The presentation with their critical, partly provocative character fulfilled their purpose of initiating a lively discussion. The active participation confirmed that there is a general interest in such debates on the side of political actors although a stronger presence of NRM-representatives would have desirable.

It is obvious that the democratisation process in Uganda still has a long way to go. Important challenges are the strengthening of democratic institutions and procedures, the guarantee of fair political competition as well as the nurturing of political parties as central actors in the relatively young Ugandan multiparty democracy. It was also confirmed that the potential for conflict in the forefront of the elections should not be underestimated. There is a continuous need for constructive dialogue and joint efforts by all democratic actors to prevent a violent scenario.

In order to make the topics and arguments of the debate accessible for a wider audience, KAS is planning a compilation of the papers prepared by the four presenters as well as a synthesis of the discussions that can be published it in a printed version.

Article in the New Vision
More about this topic