Theme: “Struggling for media space through the decades”

During a solemn occasion at their office premises, the Uganda Media Development Foundation (UMDF) launched the third edition of the Uganda Media Review Journal, July 12, 2013. The annual publication is part of the project on ‘media and governance’ supported by the Konrad-Adenauer-Stiftung. The journal presents a series of articles on media development in Uganda over the years with a focus on media space. The years’ edition is running under theme “struggling for media space through the decades”.

The event was aimed at giving a platform for journalists, media practitioners, government officials, academics and development partners to network and discuss on media development in Uganda. After having introduced the UMDF team, the Project Officer Sylvia Nankya and the Project Assistant Rita SSimbwa, UMDF-Executive Director James Kigozi emphasised the 18-year long fruitful cooperation between UMDF and KAS. Thereafter the Journal Editor John Baptist Wasswa gave an insight on the theme for the publication and stressed the need for a third volume of the Uganda Media Review Journal. The Programme Manager of the Konrad-Adenauer-Stiftung, Yusuf Kiranda, also referred to the partnership between UMDF and KAS and the need for supporting the Uganda Media Review Journal and related publications. Lastly, before the official launch of the journal, the Kampala Resident City Commissioner, Mr. Hashaka Mpimbaza who represented the minister of Information, not only underlined the importance of education in general, but he specifically called upon the journalists to inform and educate their readership. All in all the public launch represented a milestone for the successful continuity of the Uganda Media Review Journal. Not only was the journal distributed at the end of the evening, but it is also planned to send copies to libraries in training institutions and newsrooms and produce an online version. 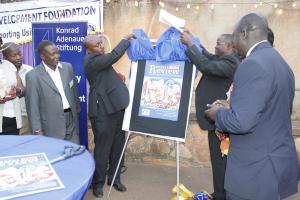 Launch of the Journal