The training series under the EU-supported "Action for Strengthening Good Governance and Accountability" continued in the district of Kisoro.
February 27, 2012 Ordering Information

Kisoro district is located in South Western Uganda. It is one of the 11 districts benefiting from the project titled “Action for Strengthening Good Governance and Accountability in Uganda” which is being implemented by KAS and ACFODE. From February 20-25, 2012, ACFODE team conducted trainings for district local government officials and civil society organizations in Kisoro district. The district boasts of plush scenery, cool temperatures throughout the year and mountainous terrain. Bordered by Democratic Republic of Congo and Rwanda, Kisoro district has potential for thriving trade. Despite these attributes all the 28 district local council representatives who attended the councilors training identified poverty and underdevelopment as issues that continue to affect majority of the population in the district.

The major outputs from the trainings included: sharing of knowledge and skills that will be vital to enable the councilors to access information that was previously inaccessible. A discussion on their powers, roles and responsibilities enabled them to gain confidence and lay strategies on how to create more transparency and accountability in the district. One councilor stated that lack of proper accountability coupled with lack of skills to bring technocrats to account remains a major hindrance to development in the district. They also identified the issues that prevent them from frequenting their sub-counties in order to seek for views and ideas from citizens. One councilor stated that “What also makes our work difficult is that when we go back to report to the voters and to seek their views they ask for money” They recommended that citizens should be sensitized on what the roles and responsibilities of local councilors and their responsibilities as citizens. . “I am glad that this project will address these challenges.” Hon. Kanavita William said.

In sharing local experiences common human rights violations were identified and include: rape, defilement, domestic violence, early marriages, underage prostitution and training of young girls by older women to join prostitution. The councilors identified lack of information and ignorance of laws and policies pertinent to addressing the said issues as major obstacles to their work. Lack of team work and joint advocacy among councilors on some arising issues were also noted as hindrances to addressing the human rights issues identified.

The councilors resolved to work more closely as a team to ensure that they access information, discuss ways in which to address arising challenges, hold joint consultations with technocrats in the district, rejuvenate the district public accounts committee, budget for monitoring government programs in the work plans of the district to enable them play their role in this regard as enshrined in the Local Government Act among others. They also requested for more skills training on identified areas that are pertinent to playing their roles and responsibilities. 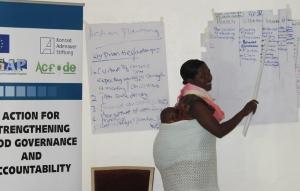