Action for Development and Konrad-Adenauer-Stiftung facilitated workshops in Pallisa and Apac in order to encourage and empower district leaders to effectively advocate for women’s and girls’ interests in their political work.
March 2, 2017 Ordering Information 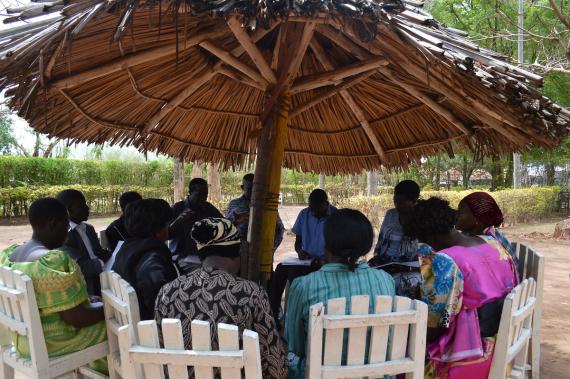 Despite the fact that legal structures promote the inclusion of women at all levels of the Ugandan society and that there has been increased access by women to leadership positions, on a local district level women leaders have been largely unsuccessful in articulating women’s interests in various areas of concern, such as maternal health, education and the agricultural sector.

To provide women with the necessary skills and platforms to effectively advocate for their interests, Action for Development in cooperation with Konrad Adenauer Stiftung has encouraged women councillors to form caucuses that bring together women leaders from different political parties to work together on important issues concerning the rights of women and girls in Uganda. In order to strengthen these caucuses and address local challenges in Apac and Pallisa districts, trainings were conducted to facilitate mentoring and coaching for these women, as well as for several of their male colleagues.

Councillors in Pallisa and Apac, after an introduction to gender concerns and women’s rights, commenced their workshop by identifying differences in treatment of men and women in their region and their negative implications. Prioritization of boys in terms of access to education and social leadership positions, women’s limited property and land rights, and a lack of respect for women’s political votes and opinions were some of the aspects highlighted. In Pallisa, participants also emphasized that men are disadvantaged in some contexts of gender-based violence, given that their claims of victimhood are often questioned and that women are prioritized when it comes to psychosocial support.

Having been briefed on the legal framework for women’s rights as well as on gender budgeting and gender mainstreaming, the women councillors of Pallisa founded the Pallisa District Council Women’s Caucus, a multiparty advocacy group for women’s issues in their district. Additional coachings encompassed the introduction to the women's manifesto, a political document by the women of Uganda which includes key issues such as women's health, women’s decision making and women’s education. Further, facilitators provided the participants in Apac and Pallisa with valuable input on lobbying and advocacy mechanisms as well as on the use of networks, such as women’s caucuses.

Other activities comprised the screening of the movie Speak Out, which portrayed messages on service provision, resource allocation and accountability. Following a training session on the use of media and other forms of communication, the participants were briefed on writing reports and devising an action plan.

Putting theory into practice, the Women’s Caucuses formulated an action plan in cooperation with the present male councillors. For issues such as female land ownership, high maternal death rates and unequal access to resources, the plan contained precise objectives, followed by a definition of potential actions, target groups and time frames for the implementation. Thus, some of the issues identified at the beginning of the workshop were strategically addressed by the participants themselves.

Both throughout the discussions and during the group work, the participants acknowledged the benefit of including men in the discussion and work. Given that these were the first workshops conducted with male and female councillors, this inclusive approach was widely received as a successful means to realising gender awareness among politicians and improving advocacy on women’s issues on local government levels. In Pallisa this particular aspect was also emphasized by the guest of honour, the LC 5 Chairman, who closed the workshop.

Mentoring and Coaching for Apac and Pallisa Women caucuses