On May 7th 2015, the Konrad Adenauer Stiftung Uganda and South Sudan convened a high level stakeholders meeting to discuss the reforms being proposed in the pension sector in Uganda with the goal of contributing to strengthening social security frameworks in the country. The round table meeting was convened in line with KAS efforts of promoting the concept of Social Market Economy around the world. The Social Market Economy idea considers balancing economic growth and the preservation of individual and market freedoms with social justice.
May 18, 2015 Ordering Information 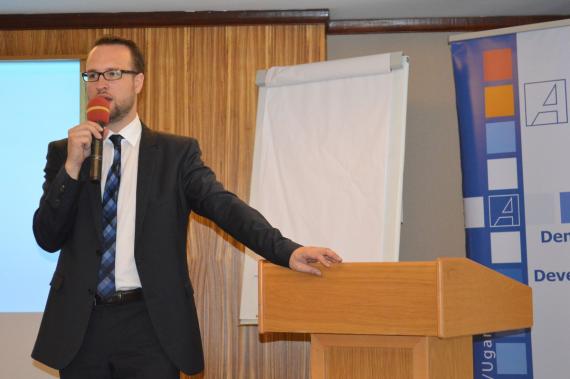 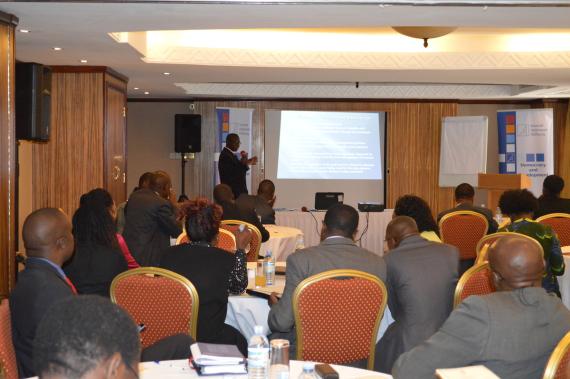 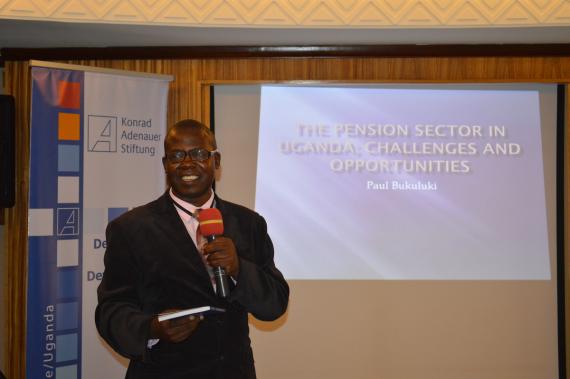 ... and main presenter of the dialogue, gives his presentation on pension sector reform. 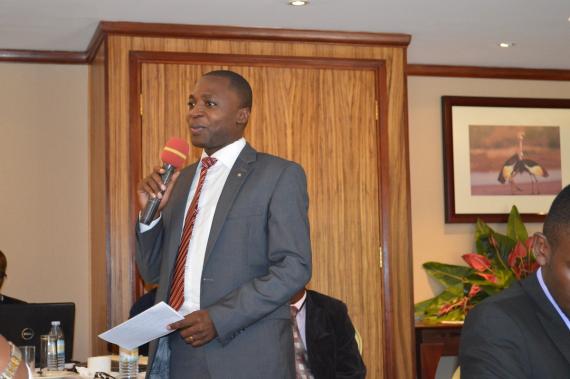 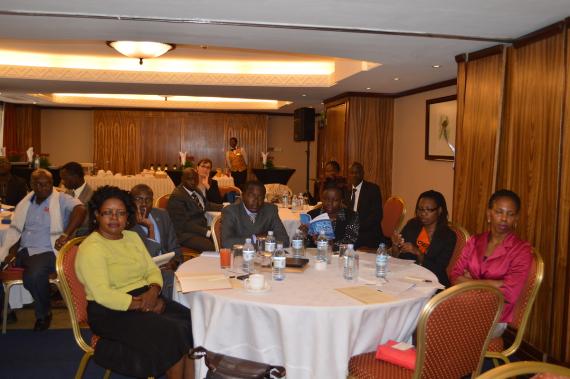 The participants were given input from different stakeholders within the social security sector. 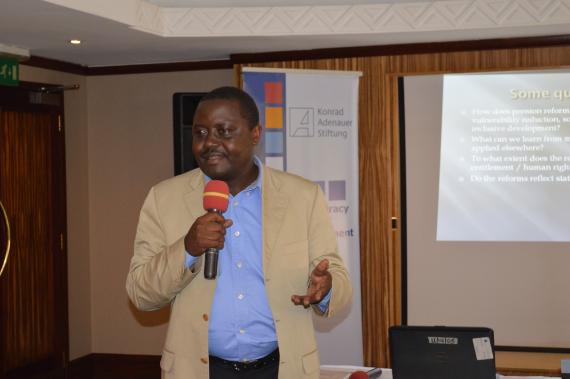 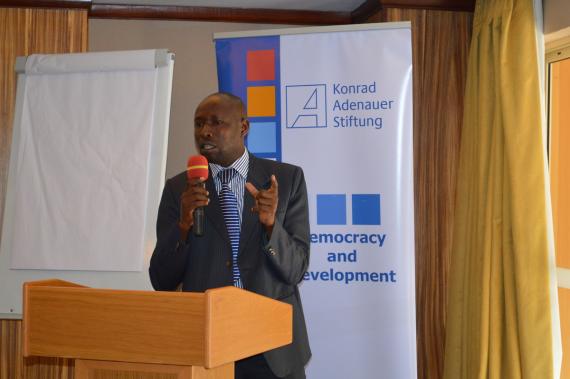 From the Ministry of Public Service, interesting insights were provided by Mr. Bua Victor Leku, Commissioner in Charge of Pensions and Social Security. 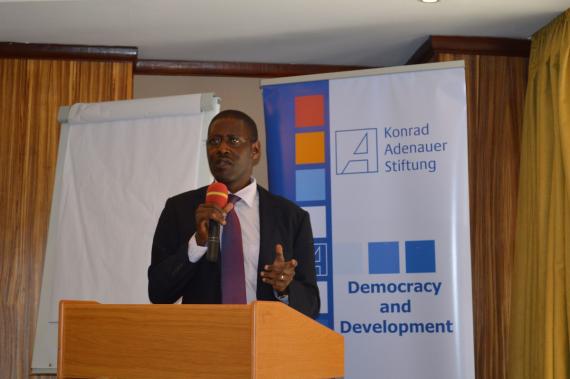 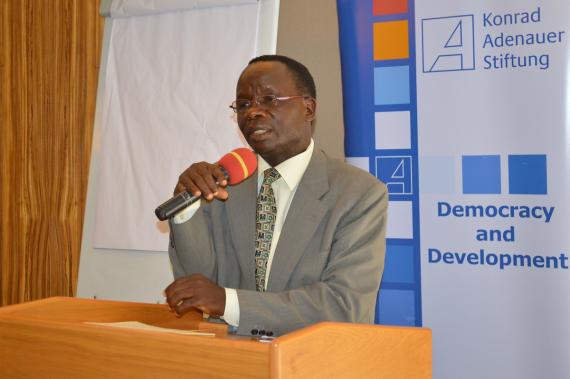 Mr. Oketcho Lawrence, Head of Policy and Advocacy of the Uganda Manufacturers Association, gives an input from the point of view of the private sector. 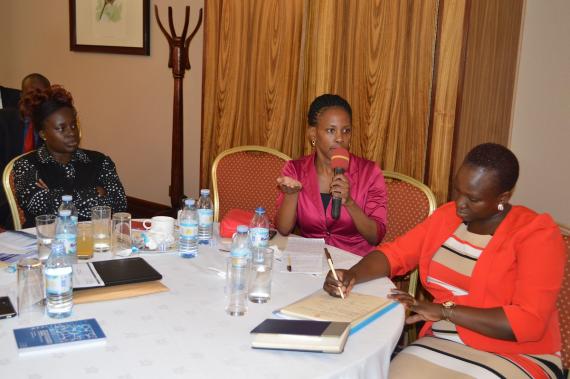 The participants of the dialogue represented further stakeholders in the sector and participated actively in the discussion. 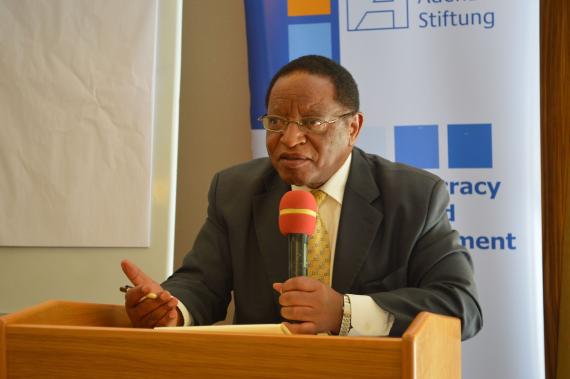 Dr. Ezra Suruma, Senior Presidential Adviser on the Economy, making a contribution during the discussion on pension sector reform. 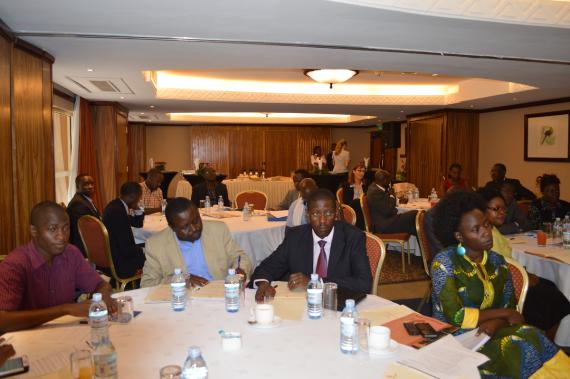 The discussion built momentum for the creation of a working group on pension sector reform among the present stakeholders.

Key representatives of different stakeholders including regulatory bodies, workers unions, pension managers, actors in the capital markets industry, and others convened at Serena Hotel in Kampala in discussion under the theme, “Rethinking pension sector reforms as a means of strengthening social sector frameworks in Uganda.

The discussion was held on the background that some key stakeholders felt consultations including with workers representatives, National Social Security Fund (NSSF) members and employers were generally limited, which meant that very valuable input may have been missed. One of the main suggestion made by participants as critical was necessary reforms that would make it mandatory for employers with less than Five (5) employees to register them as contributors to the fund. The current provision leaves out those employed in outfits with less than five people of total workforce, which makes it impossible for over 95% of employees in micro enterprises and those self-employed to be covered in the saving scheme.

In considering the Ugandan context which currently only covers approximately 5% of the working population mainly public service pensions, and private sector workers contributions to the National Social Security Fund, in their contributions, various actors included examples from some of the very few successful exceptions of formal social security institutions in Africa, such as Mauritius, Botswana, and to a certain extent South Africa.

In Uganda, the NSSF, which enjoys a vast advantage in the pension sector management, was found to offer very limited benefits with well-known risks and social needs like sickness, unemployment and problems such as HIV/AIDS not anticipated and thus not cared for. Combined with accusations of poor management of the workers savings, the NSSF scheme leaves out many firms and workplaces with less than five employees which constitute the majority of small and medium enterprises (only contributions from companies with five or more employees are accepted by the NSSF).

Participants agreed that whereas the proposed reforms as reflected in the Retirements Benefits Sector Liberalization Bill 2011, contains some very good proposals, pertinent concerns remain, including: why should workers’ savings be exposed to market forces? Should we surrender domestically generated savings to foreign fund managers? Are our financial markets developed enough to absorb these funds? What safeguards can insulate workers’ savings from risky investments? Does Uganda have sufficient capacity to regulate a liberalized pensions sector?

Overall, the meeting built a good momentum among actors in the sector towards combining efforts in forming a joint platform in pushing for a more coherent and broad social security framework agenda, including putting a focus on health, expanding pensions liberalization, and other forms of social security to cover the rest of the 95% of the population who currently do not fall into the prescribed mandatory bracket.