On 13 November 2015, the University Forum on Governance (UNIFOG) and the Konrad-Adenauer-Stiftung (KAS) implemented the last of four youth debates in Mbarara and ended a successful countrywide series of youth debates. Students from the Western Region were invited to discuss meaningful youth engagement in democratic governance and find ways forward.
November 20, 2015 Ordering Information 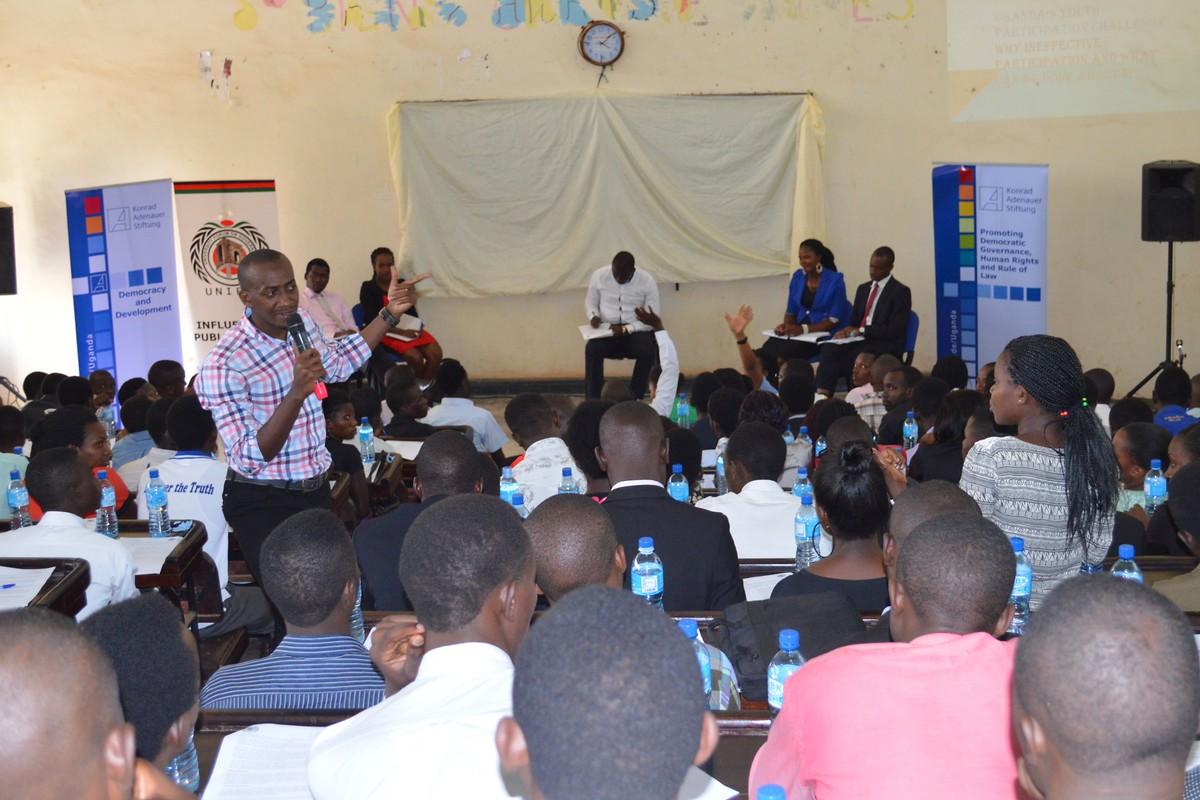 The youth debate in Mbarara was again moderated by Yusuf Kiranda and Michael Mugisha,... 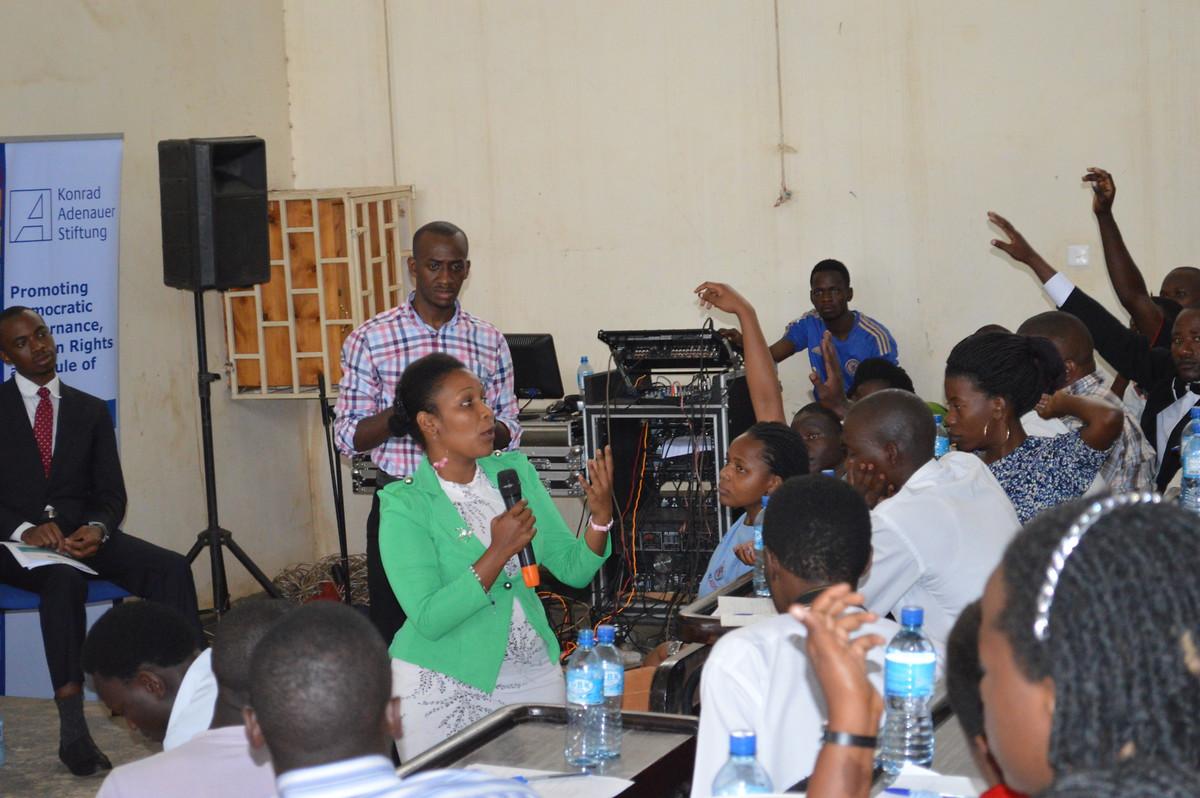 ... who collected comments and questions from the audience. 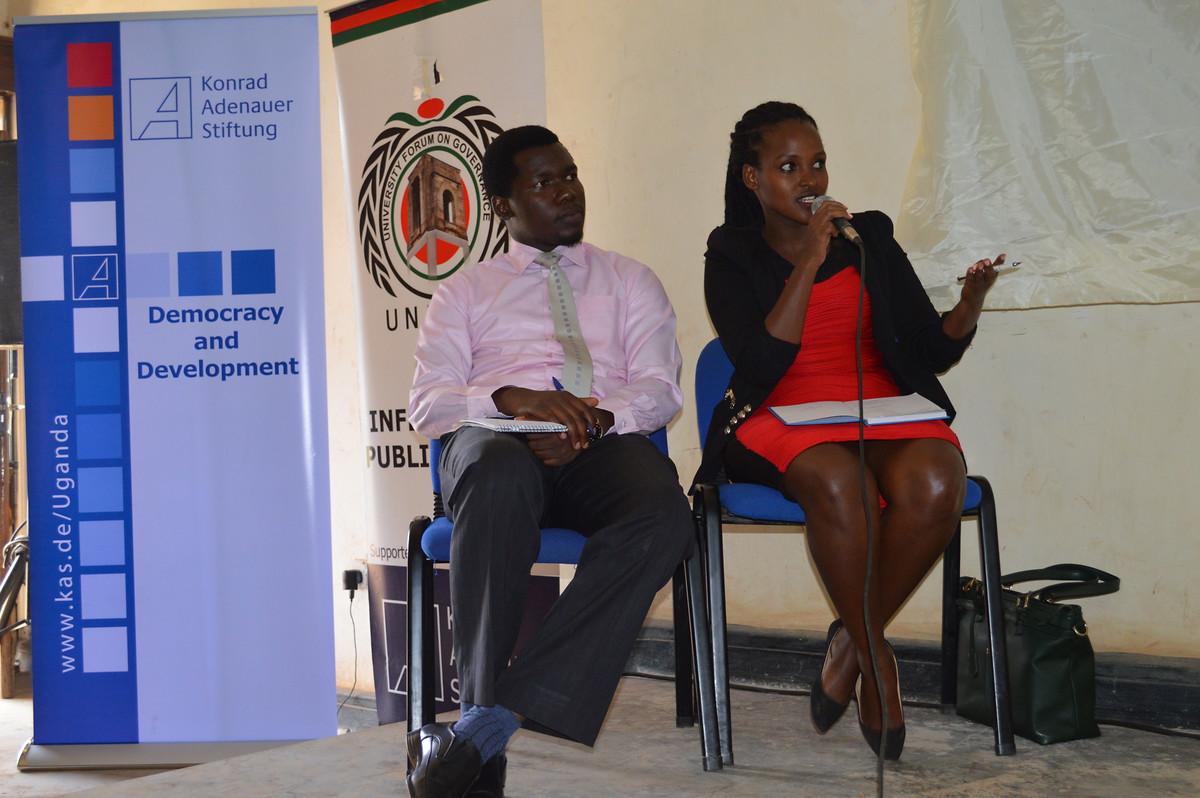 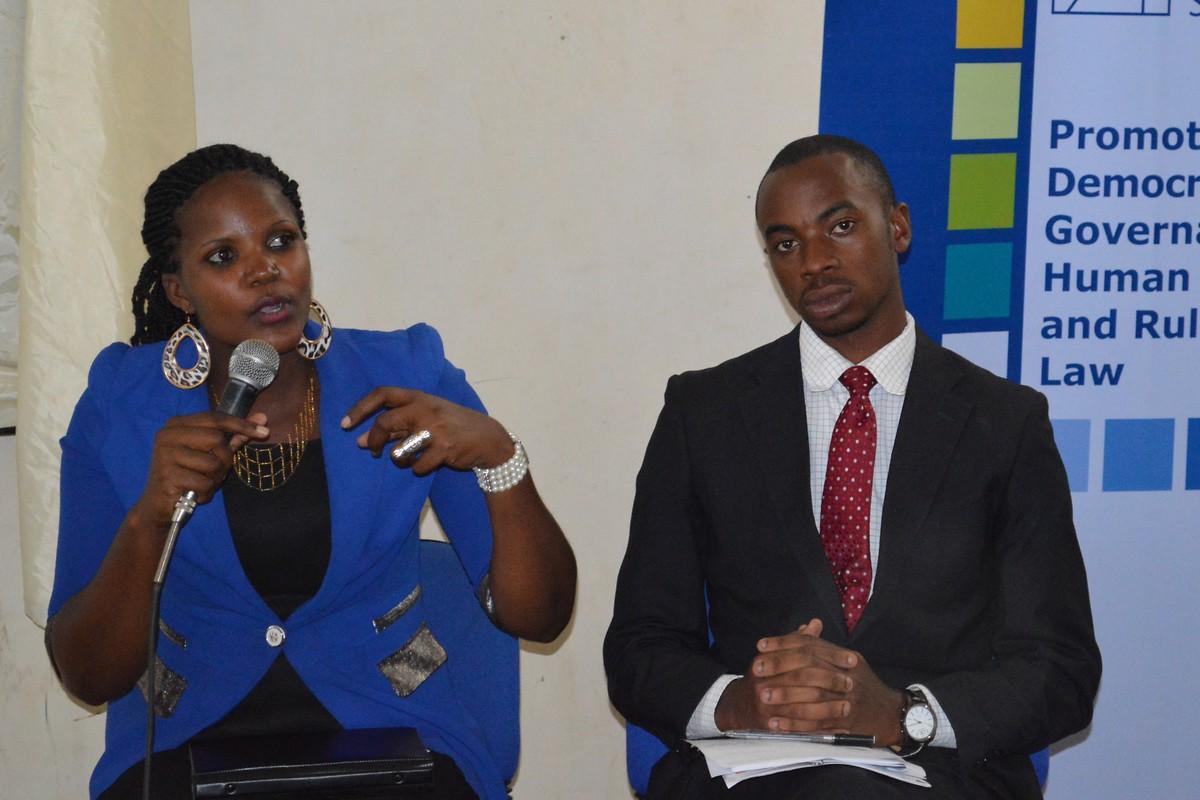 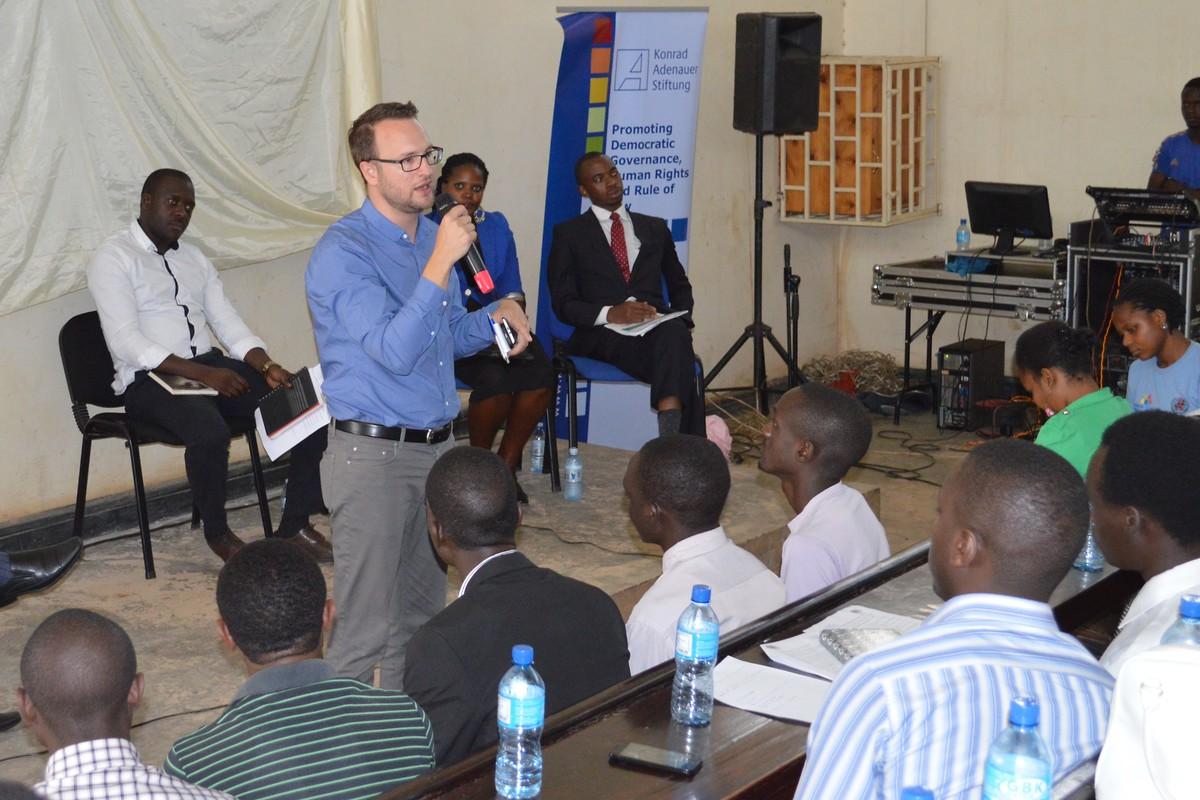 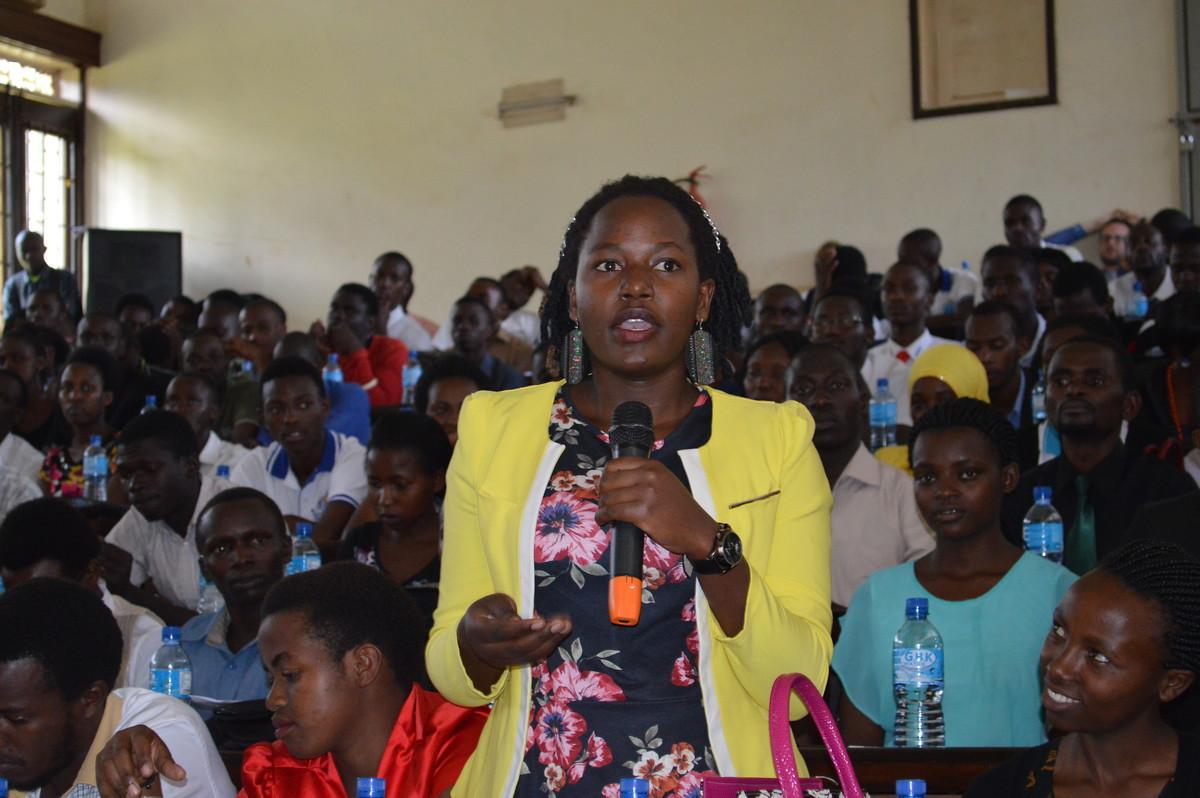 Contributions from the audience were a crucial part of the debate.

After short welcoming remarks by Mr. Bernard Mukhone, Programme Officer at KAS, Mr. Donnas Ojok, Social Entrepreneur, presented a poem on youth engagement. Mr. Ojok compared the democratic system in Uganda with a football match and described the youth as the referee in the political decision making process since half of the voting population is younger than 30 years. By highlighting the power of the youth, he called upon the audience to use their potential wisely and take action.

After that inspiring introduction, Mr. Yusuf Kiranda, Director of UNIFOG and moderator of the debate, explained the importance of the youth debates. He raised the question of why youth participation remained ineffective while a number of participation structures, laid down in the constitution and other laws, were in place and gave young people a range of opportunities to play an active role in the democratic process. To answer this question, Mr. Kiranda invited the panelists, Mr. Jacob Eyeru, Ugandan Youth Ambassador to the East African Community, Mr. Blaise Rugambwa, former Guild Speaker at Mbarara University of Science and Technology, Ms. Martha Mulerwa, Biomedical Engineering Student at Makerere University, and Ms. Patience Atukwatse, Planning and Community Development Student at Makerere University to join the discussion.

The panelists named the challenges young people were facing when participating in the democratic system. Besides unemployment, underemployment and poverty, the young generation still lived in a culture which was dominated by the elders. Moreover, some of the panelists pointed out that most of the legal structures, which should ensure youth participation, were manipulated by the NRM and made it very difficult for independent candidates to fill powerful positions.

Just like the other debates, the format of the debate allowed strong interactions between the panelists and the audience. After every panel session, Mr. Michael Mugisha, Technical Advisor with UNIFOG and co-moderator of the debate, collected comments and questions from the audience. The audience mainly discussed the issue of poverty, unemployment, and – consequentially - bribery and corruption. Some participants described the vicious cycle of high unemployment rates among young people which lead to poverty which provided the ground for bribery and corruption which, in turn, resulted in poor leadership instead of solving the unemployment problem.

The panelists were asked to find solutions for the current participation problems of the youth. Ms. Atukwatse was of the opinion that only the government was able to break the vicious cycle in creating new jobs. Ms. Mulerwa argued that more civic education was needed and blamed civil society for only being active during the election period. She directly addressed the KAS representatives and asked whether KAS was planning more youth debates after the elections. Mr. Mathias Kamp, Country Representative of KAS in Uganda, used the opportunity to explain the work of KAS in Uganda in more detail. He agreed with Ms. Mulerwa and emphasized the strong partnership between UNIFOG and KAS, which led to the success of the youth debate series. Moreover, he pointed out the historical background of KAS in Uganda and explained that KAS had been working in Uganda since decades and was engaged with civil society not only during election time but also throughout the whole legislation period.

Following that, the audience had the chance to present solutions and a possible ways forward. Some participants mentioned more effective use of social media to mobilize young people across the country. Another participant called upon the audience to stop the blame game when discussing effective youth participation and rather take action. She argued that the responsibility to ensure meaningful youth engagement was diverted into many hands but until the youth found a way forward, society would not change.

In the end, Mr. Kamp gave closing remarks and emphasized the success of the event. Once again he made clear that KAS was willing to continue the strong partnership with UNIFOG and had the ambition to expand its work upcountry to reach more young people countrywide. 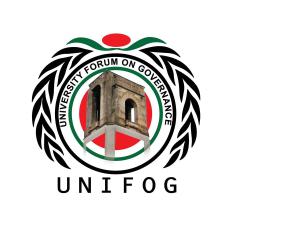 The debate was the final debate in a series of UNIFOG-KAS debates.