When artists use verbal and nonverbal communication strategies which challenge, teach and inspire, communities begin to idealize and disclose the hidden truths that are deeply rooted in their human experiences. It is upon this background that NoSSCOU, the network of south Sudanese civil society organizations in Uganda through their member organization, AnaTaban organized a public dialogue to discuss the role of the south Sudanese artists in promoting peace and national unity in the conflict ravaged country. The dialogue took place on 20th May 2018 at Makerere University.
May 23, 2018 Ordering Information

Since the war started in South Sudan, painters have illustrated what is going in the country. Musicians have sung songs to sensitize the public and criticize the corrupt and war-loving politicians. Poets and spoken word artists have emerged are now part of the intelligentsia of the South Sudanese society. The South Sudanese artists are using art that originates from their everyday lives and personal experiences to create meanings and sensitize the citizens. This way, they are a making a contribution towards building a better and more peaceful South Sudan. When used constructively, the creative arts can fundamentally change the discourse around conflict and promote peace building. This is because various creative arts platforms offer innovative ways for expressing feelings, complex situations in simplified, compelling and easily understood ways.

In her welcome address, Grace Andrua the deputy chair of the network emphasized the importance of music and the role it plays to heal broken hearts and nations. Grace gave the example Emmanuel Kembe’s songs which acted as revolutionary anthems for South Sudan’s liberation struggles reiterating that his music inspired and restored hope among south Sudanese regardless of their ethnic divides and identities.

The team leader of AnaTaban in Uganda, Patrick Godi also upheld the role the creative arts play and he emphasized that the new breed of South Sudanese artists are today being nurtured and supported by the organization by offering a unique platform where their talents are nurtured and harnessed to promote peace and development in the country. AnaTaban is investing South Sudan’s creative arts because artists through their creative mediums act as the mirror of society and they reflect what is going on in societies.

Creative artists also contribute towards peace building and reconciliation because arts enhance the spirit of comradeship and solidarity which bonds populations to work together for a common cause. This is particularly important in South Sudan where the need for solidarity to promote national unity and identity is glaringly evident.

The creative arts too can be used as a tool to constructively criticize and hold politicians accountable for their actions. Artists like Yvonne Chaka and Lucky Dube used music to criticize the apartheid regime and significantly contributed to destroy one of the most systemic racial injustices in the world. This point was re-echoed by Saab Jay, a south Sudanese Reggae artist who uses his music to criticize south Sudanese politicians for not minding about the plight of the ordinary citizens. According to him “No fish survives without water. South Sudanese are the water and the politicians are the fish. They need us to swim, less they will drown”.

As advocates, artists use their platforms to elevate the voices of the ordinary citizens to be heard louder. Silver X, a prominent South Sudanese musician for instance, has used his music to portray the plight of the South Sudanese communities in the refugee settlements. He also organizes free music concerts in the camps to entertain and enlighten the refugees “It’s there that we can feel what the refugees go through and our art means a lot to them especially now that they are hopeless in the search for peace” he said while calling upon fellow artists to join him in organizing more free artistic events in refugee settlement sites.

Furthermore, arts also act like a universal language that can be understood and consumed by everyone regardless of their skin color; tribe and ethnicity. Ran K, a South Sudanese poet explored at length about how South Sudanese can use their rich artistic cultures as a bridge that unites them as a nation. He hinted that for centuries, South Sudanese folklores, poems and music cemented ethnic relations and led to a wider appreciation of different cultural values and virtues. He called upon the audience to learn from the past and once again used their rich cultural diversity as tool for peace building and harmonious co-existence. Ran K also emphasized that art is a form of civic education which plays a part in raising civic consciousness. This is important because a nation is only built by peoples who are civically aware and conscious.

On his part, SamSee a South Sudanese musician re-echoed his strong believe in the power of creative arts to provide a platform where conflict and war can prevented. He said that artists can use their art to sensitize the ordinary public about the dangers of war and why they should not engage in violence. Apart from sensitization, art in its self are a form of liberation. It liberates the mind and makes it able to re-imagine the possibilities of a better world order. This was captured more succinctly in this comment by Saab Jay; “When I sing, I am deliberately passing on messages of hope and restoration and calling upon people to be positive about the future and what they can do to re-create this future”.

Peace only comes when everyone appreciates it. Indeed, art leads to a wider appreciation of peace and stability because through art, people feel, see and touch what is within the realms of possibilities. For instance for Kiden who attended the dialogue, traditional songs played a key role for her community to appreciate the value of peace and come together to work for the greater good.

But art can also be destructive. There musicians in South Sudan who still use hate words in their messages. They abuse each other based on ethnic inclinations. This, SamSee said will make the possibilities of peace in the war tone nation a farfetched dream. “As artists, we should be conscious and deliberate in using our art to unite rather than divide communities”, Samse Sam emphasized. In South Sudan, Social media is a hate speech propagator. But artist can use social media to promote peace and nation building since they are individuals with powerful status in our society.

From the conversations at the public dialogue, it was clear that through different languages, logics, reference points, and interpretive frameworks, the artist in South Sudan have played a key role in enabling the South Sudanese to see the world through a new lens. Arts thus lie at a unique intersection of peacebuilding, conflict resolution, and political stability, cultural and national identity in South Sudan. It provides a gateway for a better understanding of the emotional and psychological drivers of conflict in the country and how to prevent it. 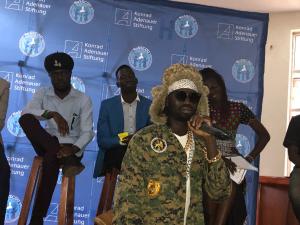 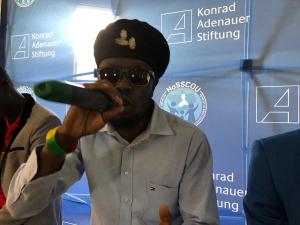 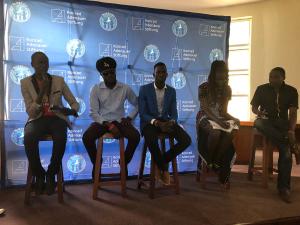 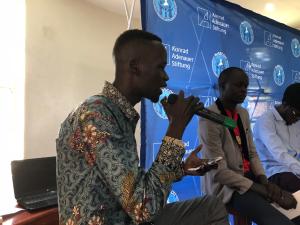