by Yusuf Kiranda
Members of the KAS supported Young Leaders Think Tank for Policy Alternatives have held a meeting with the Deputy Speaker of the Ugandan Parliament, Rt. Hon. Jacob Oulanyah. They presented to him several policy alternatives for promoting youth employment in Uganda.
August 8, 2011 Ordering Information

The meeting on Monday, 8th August 2011 was held as one of the strategies employed by the think to present policy alternatives from the perspective of the young people and lobby for their adoption.

Youth an employment presents one of the daunting challenges to Uganda’s economy at present with the World Bank estimating that 83% of the Ugandan youth are unemployed. Given this background, members of the Think Tank invested weeks analysing the youth employment situation in Uganda as a result of which a position paper was developed. It is this paper that was presented to parliament for a possibility of action towards adopting the proposed policy alternatives. Among the recommendations presented include that improving the education system, establishing mandatory intake of interns by employers and introducing scholarships for vocational training.

Responding to the presentations Hon. Oulanyah welcomed the Think Tank as good platform that can provide policy makers with different perspectives on policy issues and commended members for taking initiative to share their ideas with parliament. He challenged the think-tank to get beyond mainstream blame gaming and put forward concrete alternatives for development. He pledged parliament’s commitment to acting on the think-tank suggestions. The meeting was also attended by Hon. Monica Amding, the Chairperson of the Parliamentary Forum on Youth Affairs. 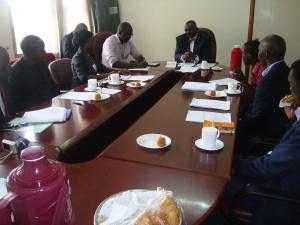