Uganda is one of the countries where the impact of corruption causes considerable political instability and furthermore represents a hindrance for social and economic development. In order to achieve improvements in transparency and accountability as well as curbing corruption, journalism needs professional journalists capable of understanding transparency and governance issues through conceptual frameworks and tools.
August 19, 2011 Ordering Information

Against this background, Uganda Media Development Foundation has conducted a training programme for local journalists from 14th to 17th August in Fort Portal. The four-day workshop was supported by Konrad-Adenauer-Stiftung.

In the first part of the workshop the fundaments of corruption including topics such as definition of corruption, key players in the fight against corruption as well as the impact of corruption were discussed. The possibilities of investigative journalism to tackle corruption constituted the second part of the training. Hence the programme raises not only awareness of the different manifestations of corruption and its consequences but rather encourage the participants as representatives of the press and electronic media to forcefully report to the public on corrupt practises in the society.

The training was part of series of FAD-UMDF activities which address various forms of interventions in strengthening the media’s role in the democratic processes. 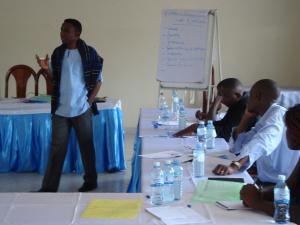