Capacity Building as Preparations for the 2016 General Elections

From 19th to 21st May 2015, the Konrad-Adenauer-Stiftung and Action for Development (ACFODE) implemented the second workshop in a series of workshops which aim at preparing aspiring women leaders and women who are already in elected office but are going to aim for higher offices for the 2016 general elections. By capacitating and empowering the participants, ACFODE and KAS hope to motivate more women to run, as well as to enable them to effectively and efficiently campaign for themselves.
May 25, 2015 Ordering Information 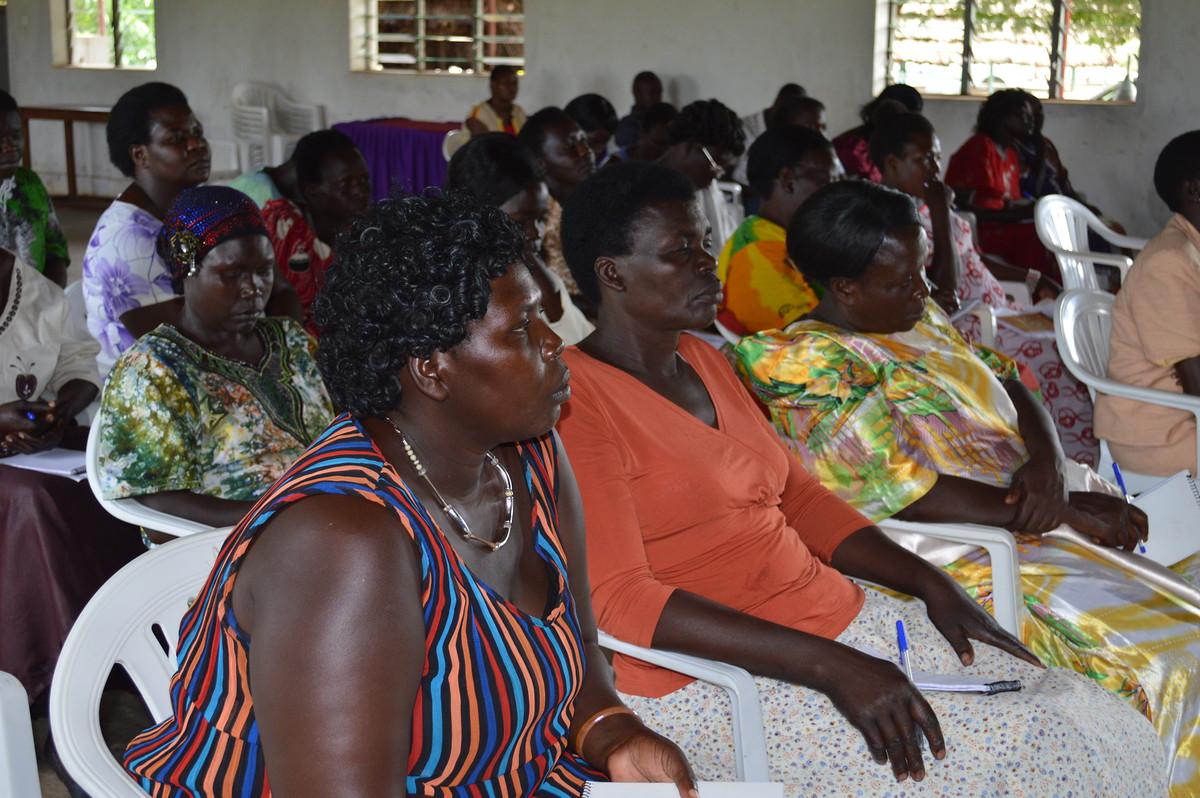 The participants of the workshop were women who are going to run for office for the first time as well as those who aspire for higher electoral positions on the local government and even on the national level. 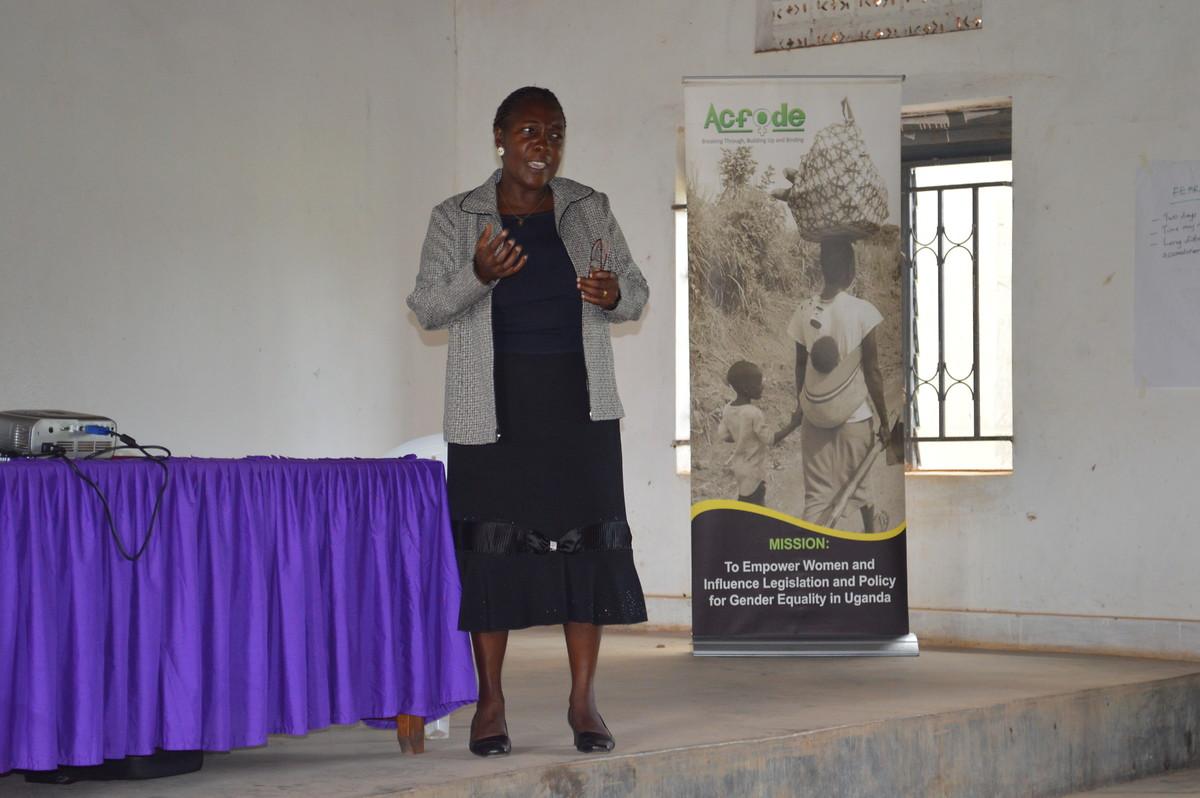 Ms. Carol Idembe, gender and advocacy specialist, facilitated the session on the legal and human rights basis for women's participation in politics. 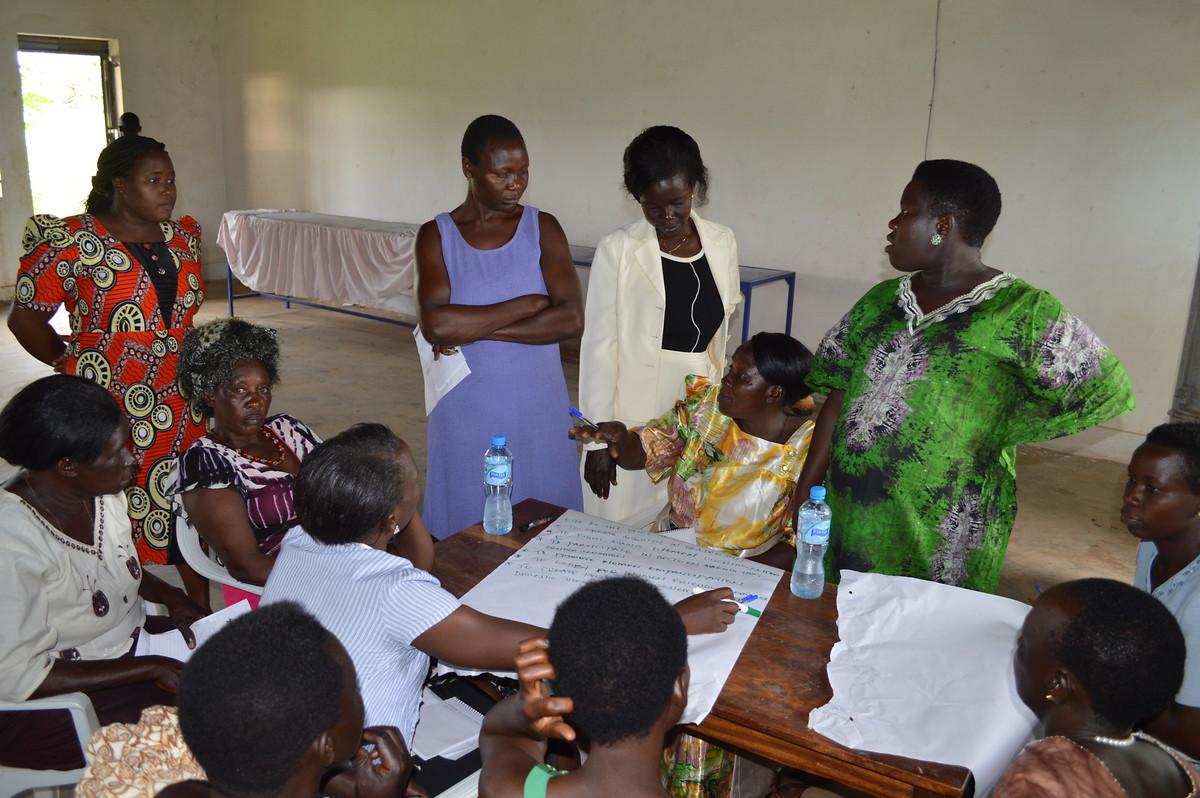 The participants engage in group work on the importance of women in leadership and the hurdles women have to face when running for office. 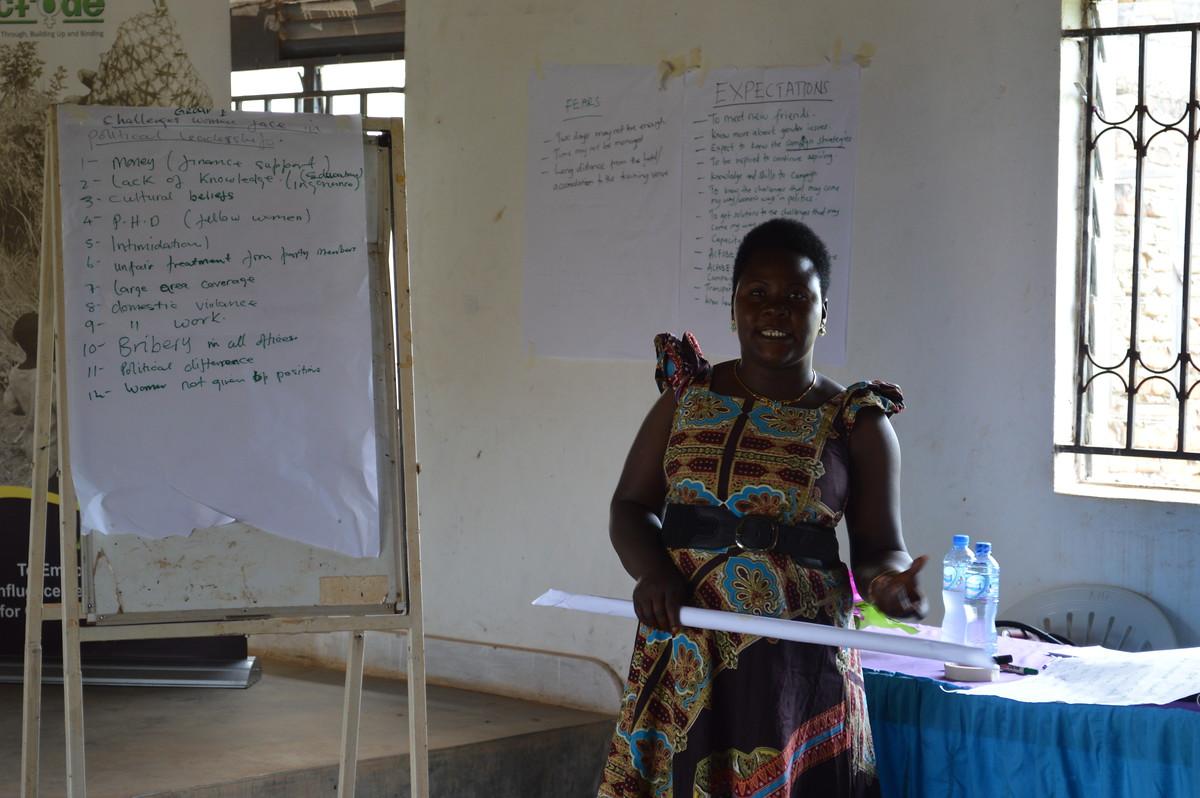 The presentation of the results of the group work... 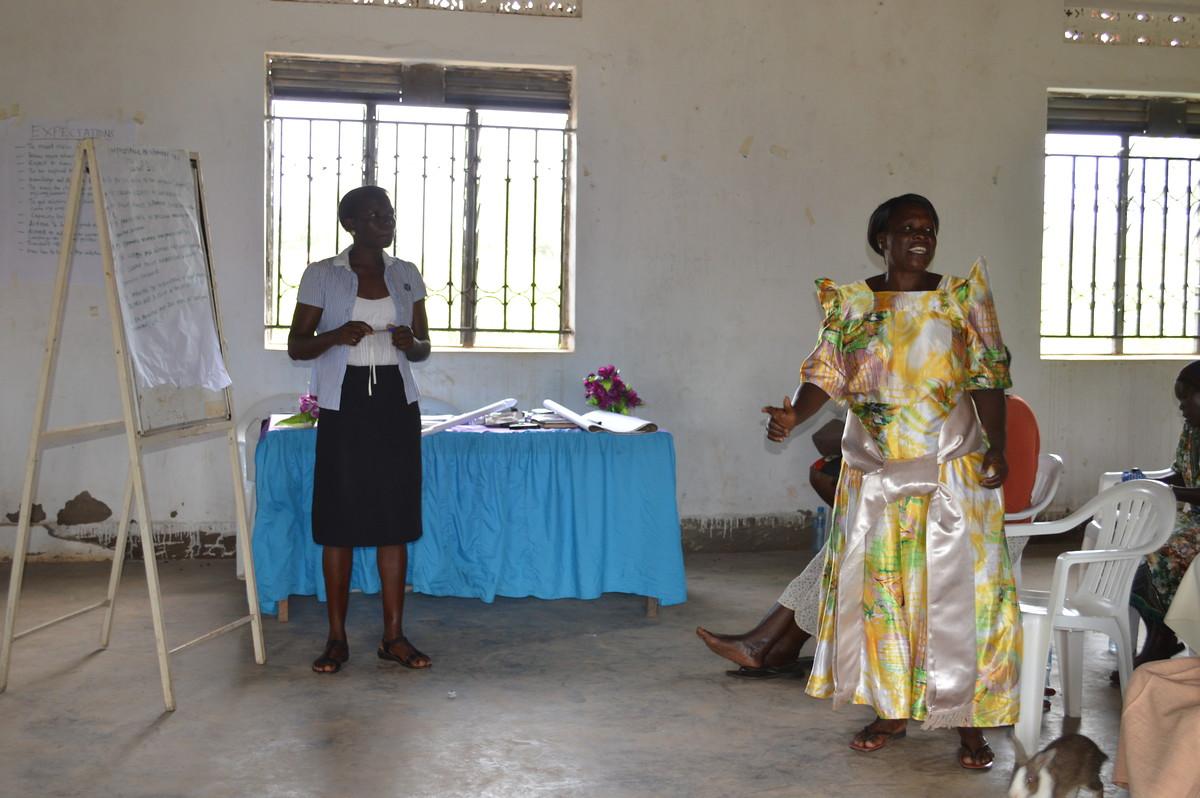 ... sparked heated discussions among the participants. 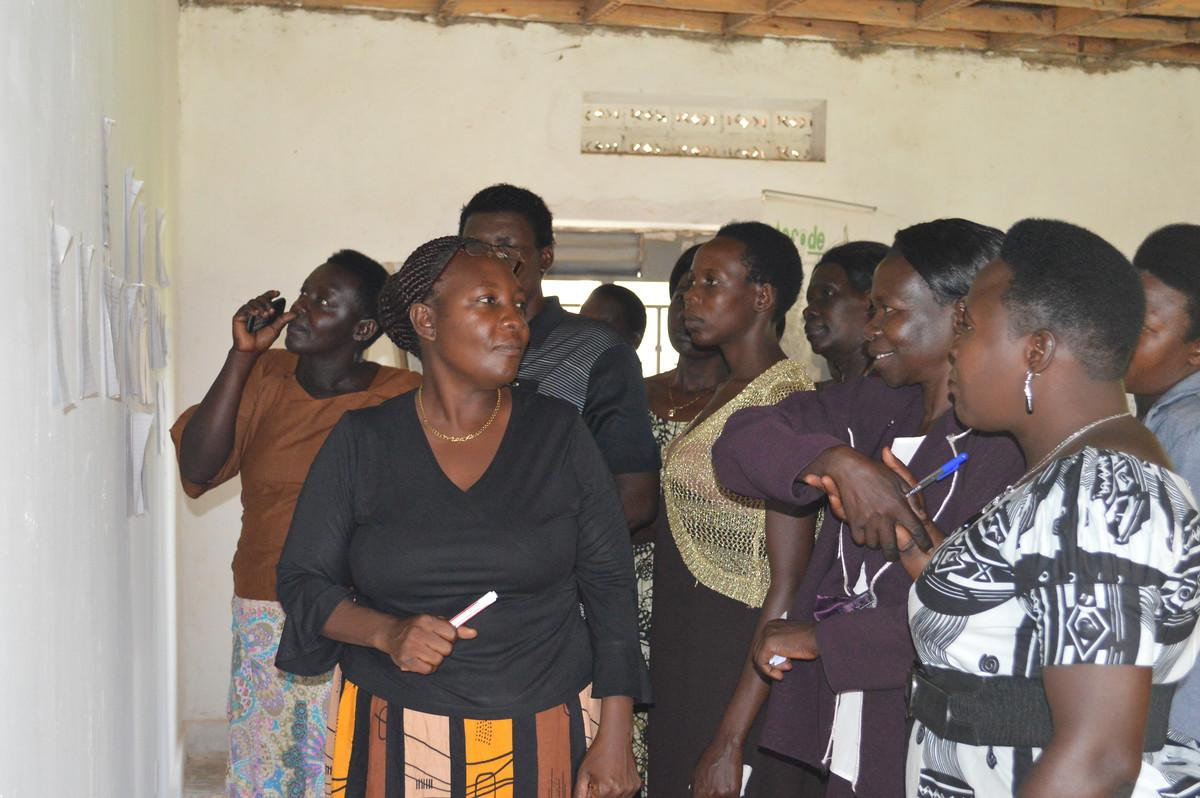 Carol Idembe discusses the solutions to the challenges women face when running for political office with the participants. 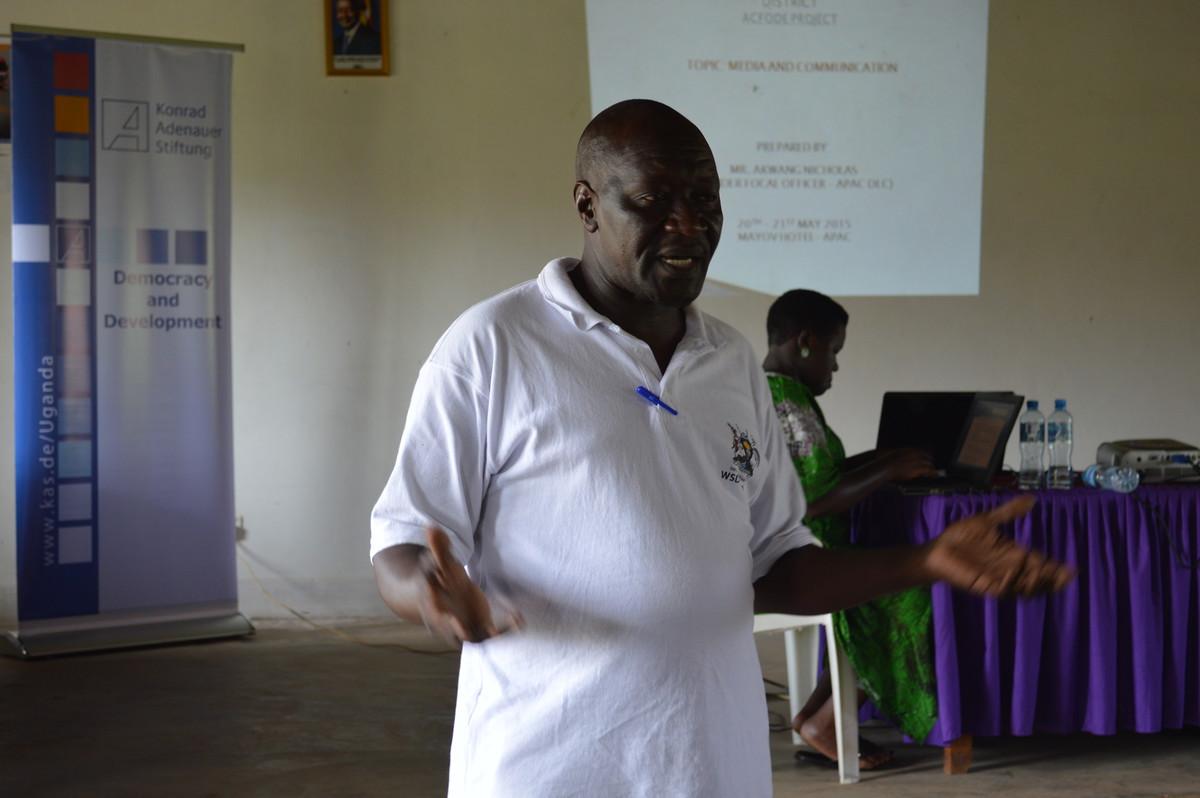 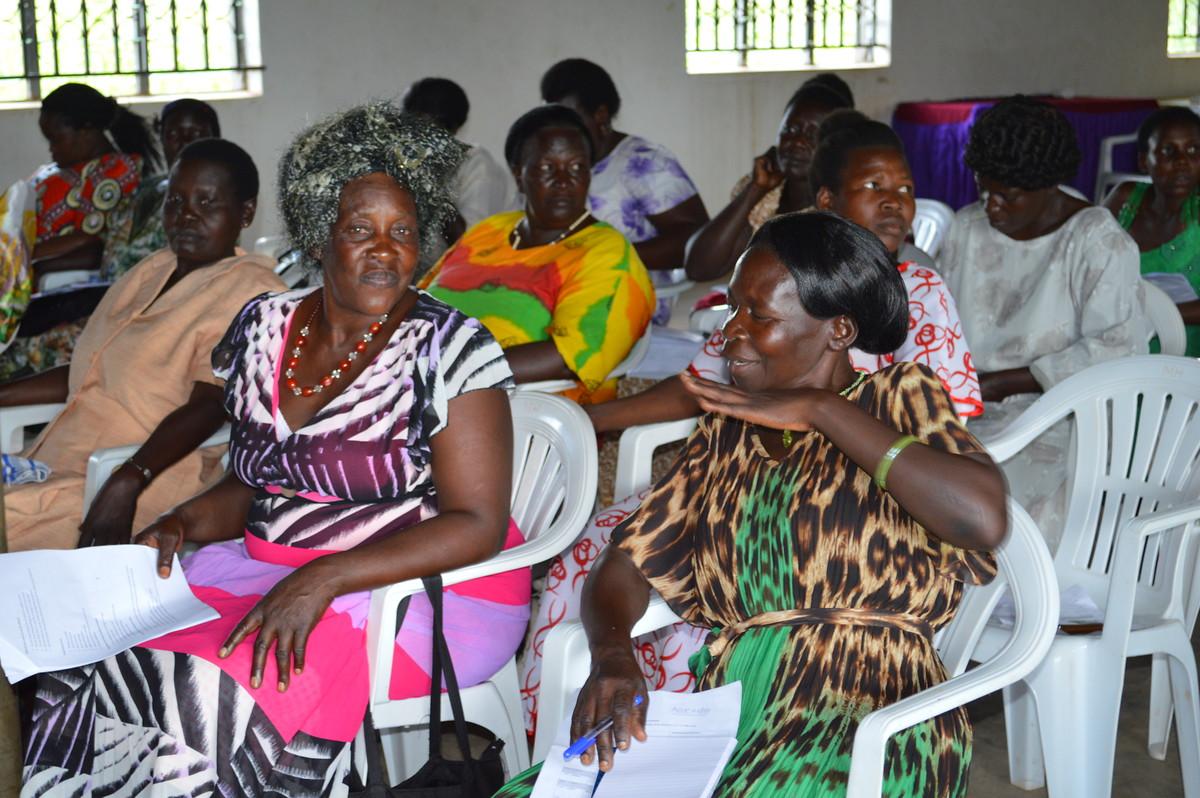 ... and cautions the participants to never make empty promises and avoid offensive language. 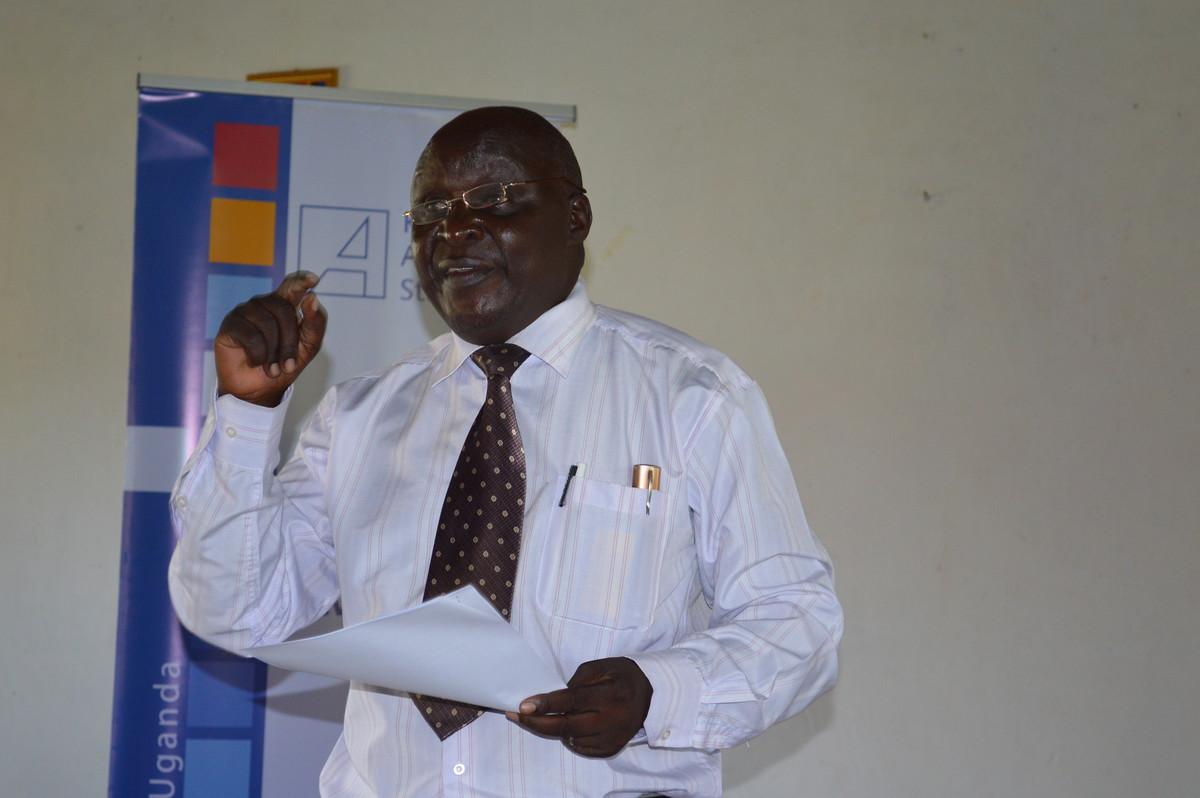 Mr. Musimbi Jimmy, District Registrar of Apac District, introduces the participants to the Electoral Commission Roadmap to the 2016 elections. 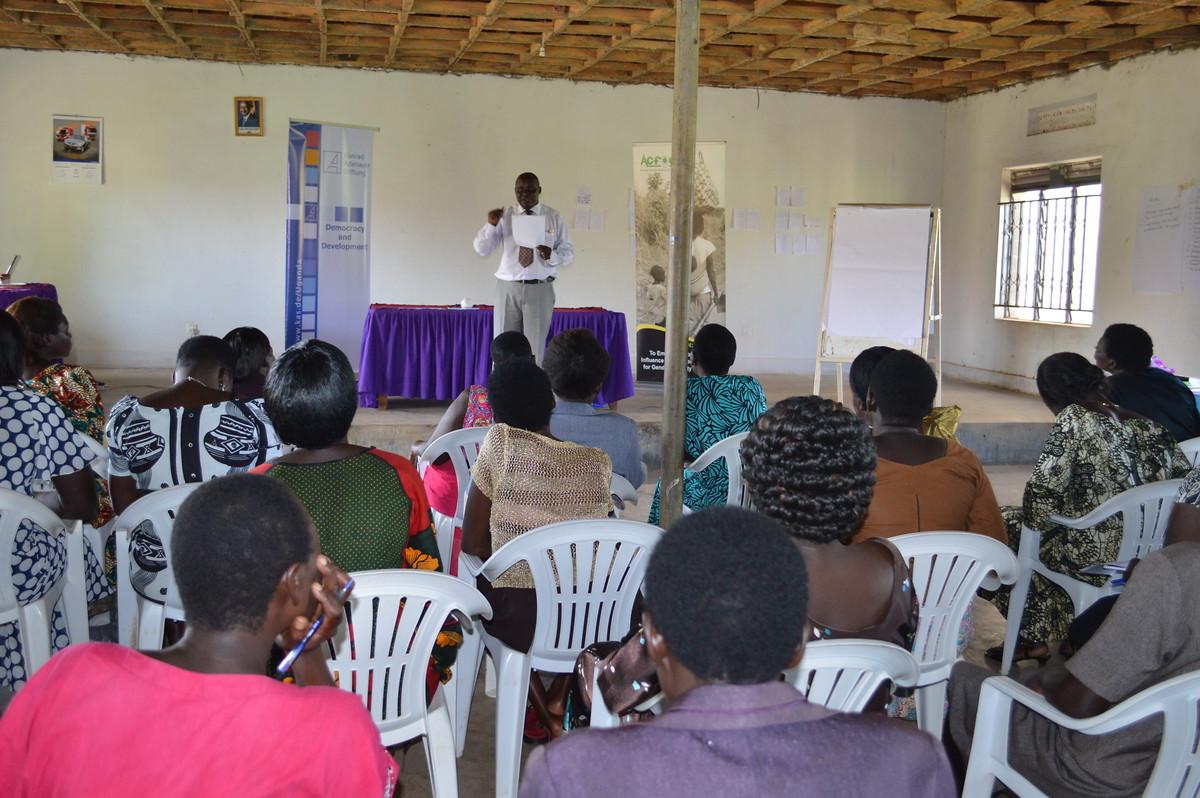 He also uses the opportunity to encourage the participants to run for open seats as well as for the position of chairperson LC3 or LC5.

The Ugandan Constitution provides for special seats for different socially and politically marginalised groups, among them women and the youth. The Affirmation Action Laws have led to a series of improvements when it comes to female representation in politics. Nevertheless, women still face a series of hurdles and challenges in case they decide to run for political office. Against this background, ACFODE and KAS are implementing a series of workshops in order to inform women about their right to run for any political office in Uganda and the basics of the political system as well as to capacitate them in terms of campaigning (more on the issue of affirmative action in Uganda as well as on the workshop series can be found in the report on the previous training in Kiboga: http://www.kas.de/uganda/en/publications/41153/).

The second workshop which was implemented against this background took place in Apac District in the Northern Region of Uganda. It brought together 30 women who are either already local councillors or who have decided that they are going to run for political office. The participants covered a broad range of political aspirations, starting at the sub-county level, all the way up to aspiring Woman Members of Parliament (MPs).

The workshop started with an introduction by Ms. Carol Idembe, gender and advocacy specialist, to the legal and human rights basis for women in political office, which covered a brief introduction to the Constitution of Uganda, as well as to international documents such as the Convention to Eliminate all Forms of Discrimination Against Women (CEDAW) and the African Charter on Human and Peoples’ Rights, to which Uganda is a signatory. Following that was a first discussion on the question why women in Uganda, even though the legal basis for their participation is strong, are still struggling to establish themselves in the political arena and are therefore still underrepresented in regards to the fact that more than half of the Ugandan population is female. While some participants mentioned the limited access to financial resources for women, most contributions in the following discussions pointed towards the fact that the Ugandan society does not support or condone of women in positions of political leadership. The participants explained that many Ugandan men and women perceived women who are politically active as prostitutes or believed that they would leave their husbands as soon as they are politically empowered. However, they emphasised strongly that especially many women did not want to see other women engaging in politics and standing for office. They referred to the so called “Pull Her Down”-Syndrome, which was deeply rooted in the belief that women are supposed to be in charge of household and children and not aim for a career or an office which exposes them to the public – a gender role which is strongly carried forward by women who find themselves comfortable in the traditional system of gender relations. As the participants discussed possible solutions to the problem outlined above, they agreed that the only way to get other women and the society in general on board with their efforts to engage in political leadership would be sharing of knowledge and engagement with the communities in order to disperse fears and garner support.

Another session of the workshop focused on the use of the media for female candidates in times of campaigning. This is an important aspect because first of all by using different media outlets, candidates are able to make themselves known and to spread their messages more easily. Second, the media in Uganda tends to deploy double standards when it comes to reporting on women and men in politics. Therefore, female candidates do not only have to be prepared to face a hostile media environment, but also have to know how to make use of this environment – however unfavourable it might be. Mr. Nicholas Akwang, the District Gender Officer of Apac District, emphasised that the participants would have to follow certain rules of communication when engaging with the media, among them for example to avoid abusive and offensive language, to be accommodating and receptive for suggestions and even criticism, and to listen closely before reacting hastily. He stated that the key to good and effective communication was active listening and that the candidates should under all circumstances avoid making empty promises, as those would be on record and could always be used to hold them accountable at a later point in time. All the rules and advice he mentioned aimed at fostering a sense of dignified engagement with the media which would then in turn reduce possible targets for attacks through the media – be it by opponents or by journalists themselves.

Mr Musimbi Jimmy, the District Registrar and Returning Officer of Apac District, took over the task of introducing the participants to the Electoral Commission Roadmap to the 2016 elections. He used the opportunity to point out that currently, after updating the voter register, the Electoral Commission (EC) was in the process of preparing the display of the voter register. In his opinion it was crucial for all candidates to take key interest in the EC’s activities especially in this phase of the preparation for elections, as one of the purposes of the display phase was to remove people who have passed away from the register. He pointed out that in the past, people have used the ballots of deceased people for their political interests on election day. In connection to that, he encouraged the participants to have their own interest at heart and engage in close monitoring of all EC activities. He explained the procedures which candidates had to go through in order to be nominated for the elections and mentioned that a new law had been passed which provides for representatives of elderly people on LC5 (district) and LC3 (sub-county) level.

Using the opportunity of speaking with 30 (aspiring) female political leaders, Mr Musimbi encouraged the participants to run for all kinds of electoral offices, not only women’s seats. He emphasised that a women who had been elected on a women’s seats once or twice should now take the courage to run for an open seat, as she would be well-known in her constituency and would have an even smaller area to cover when it comes to campaigning and gathering support. In his opinion, the only way that gender issues would be brought to the lime light and discussed in the political arena would be if more women would take up the challenge of running for an open seat and through that breaking the glass ceiling which is still intact besides all affirmative action in Uganda. In a similar manner, he advocated for more women running for the position of LC3 or LC5 chairperson. With that, he reacted to a problem the participants had outlined before, which was that the political parties would use female politicians only for deputising positions. He strongly emphasised that women would have to run for the top posts themselves and not wait for political parties to lift them into those positions, as political parties were not structured in a way which prioritises the empowerment of women.

On the first day of the workshop, Mr Musimbi had asked the participants to write down questions to him so that he could prepare for his sessions the following day. One of the questions which were handed to him in this process concerned the number of women councillors in the District Council. As it turned out during the discussions with the District Registrar, Apac District should have 10 women councillors, but only had eight – a fact which Mr Musimbi could only describe as a serious mistake which had to be corrected as quickly as possible. He asked the chairperson of the women council to write an official complaint to him which he would then forward to the Electoral Commission. In his assessment, this complaint could even lead to by-elections for the two empty women councillors seats. This development demonstrated that it was crucial for women councillors on all local government levels to know the rules and regulations and to be able to engage with the Electoral Commission and other stakeholders. Even though unintended, the fact that the mistake was brought to light during the ACFODE-KAS workshop and will hopefully be rectified, through that strengthening the position of women in the District Council as well as giving more women the chance to participate in politics, is an extremely positive outcome of the capacity building sessions.