by Maike Messerschmidt
Between 11 and 13 March 2014 Action for Development (ACFODE), a Ugandan women's rights organisation, held a highly successful workshop for female councillors in Pallisa District in cooperation with the Konrad-Adenauer-Stiftung (KAS). The aim of the workshop was to equip the female participants with the tools they need in order to successfully champion the interests of their constituents generally and those of women particularly.
March 26, 2014 Ordering Information 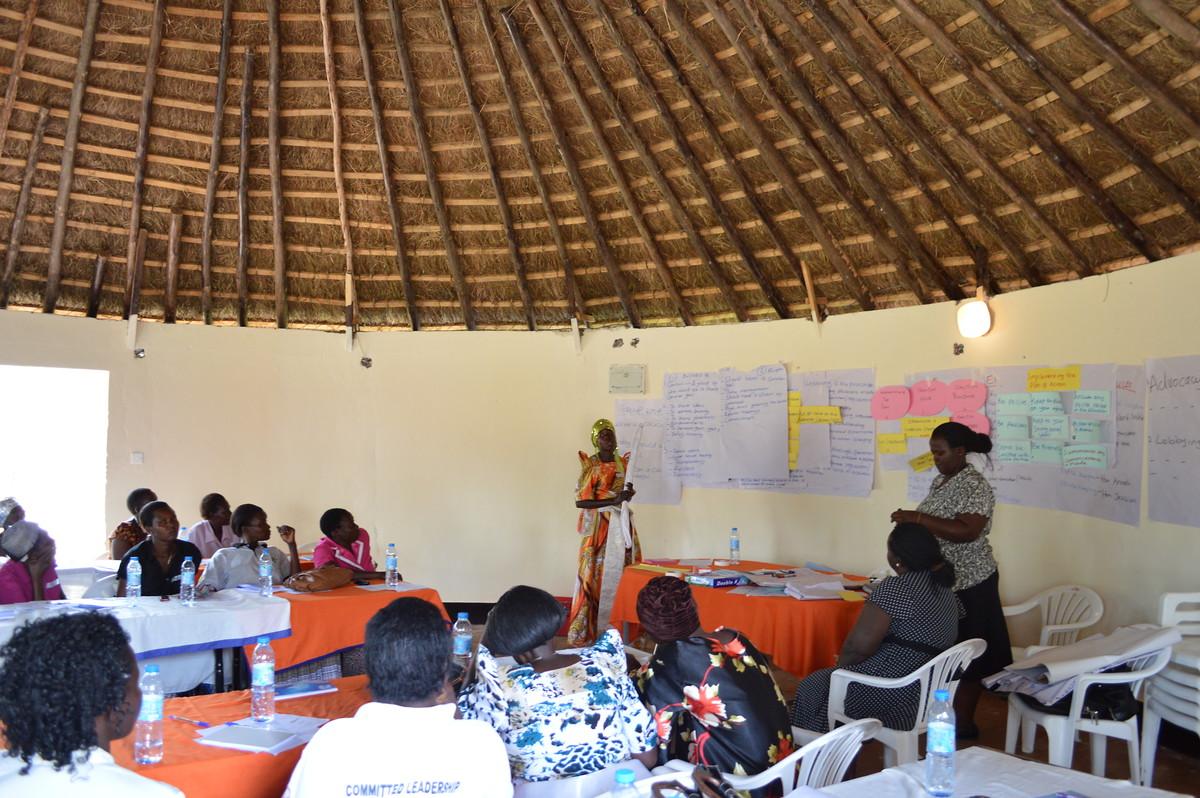 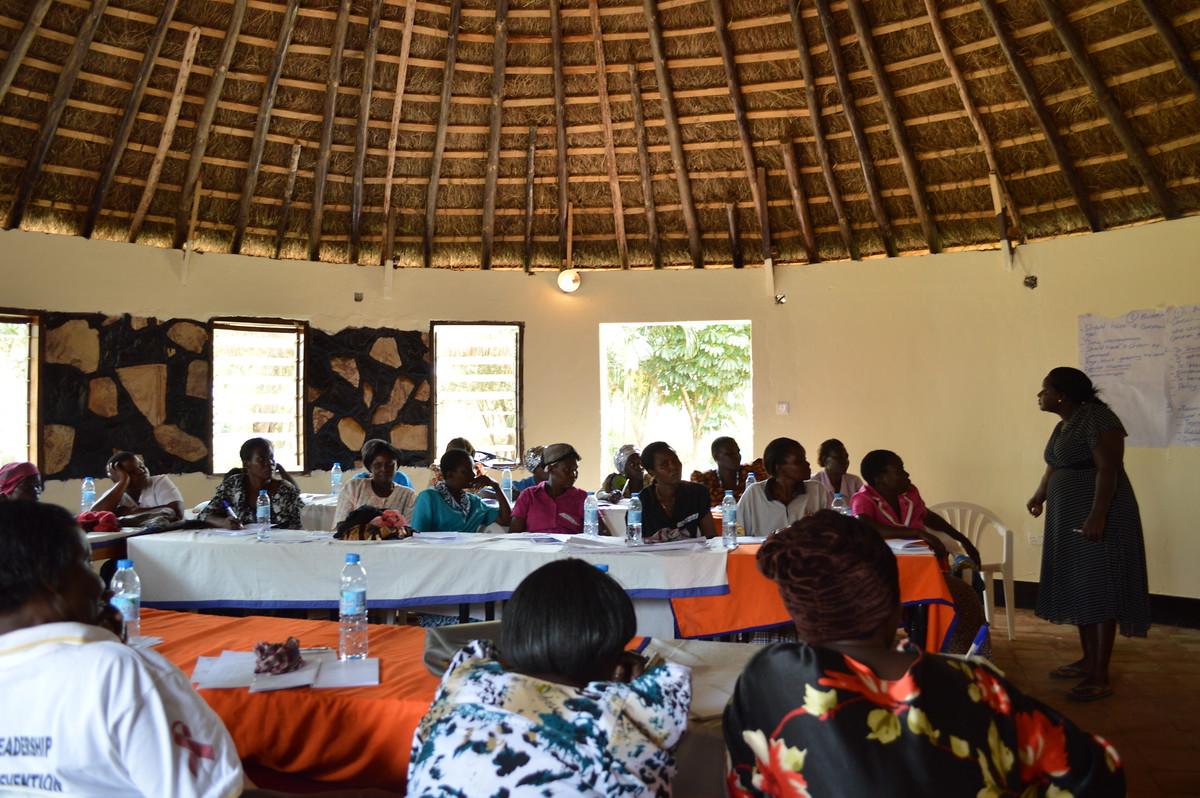 session about the use and purpose of a women's caucus 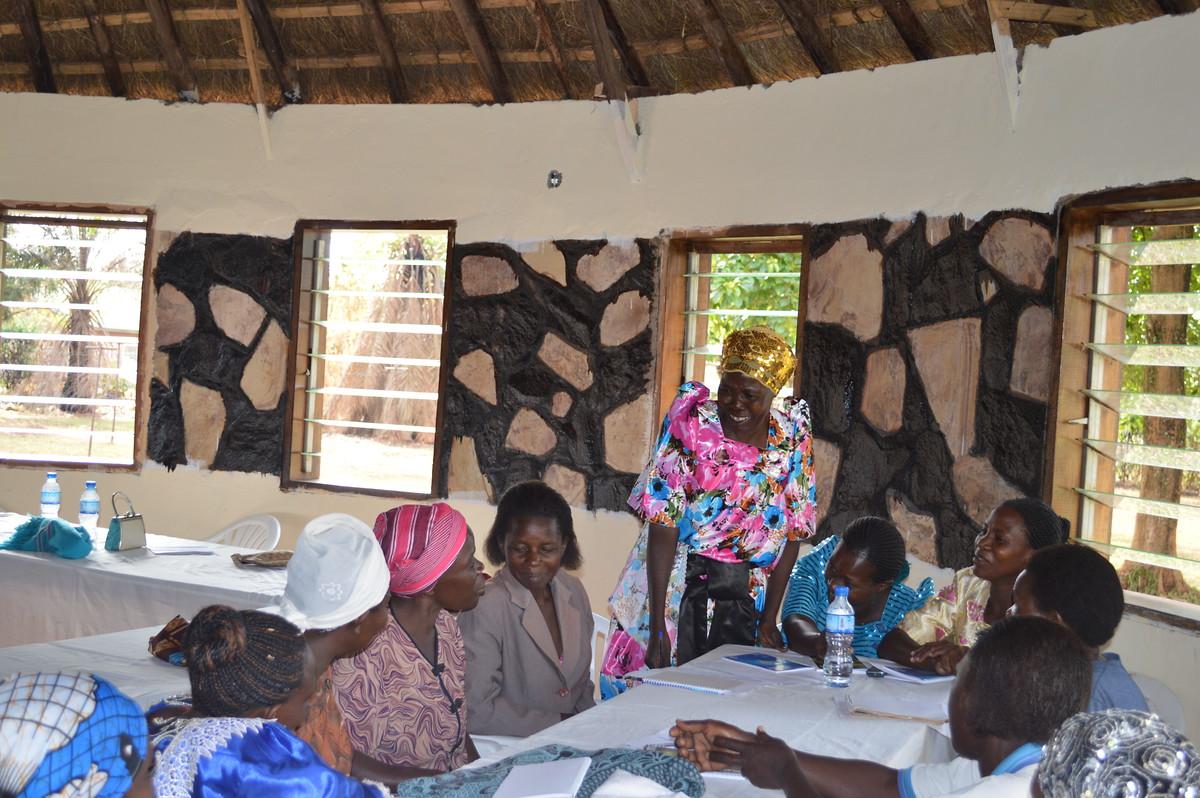 participants from Butebo Sub-County during preparations for a role play 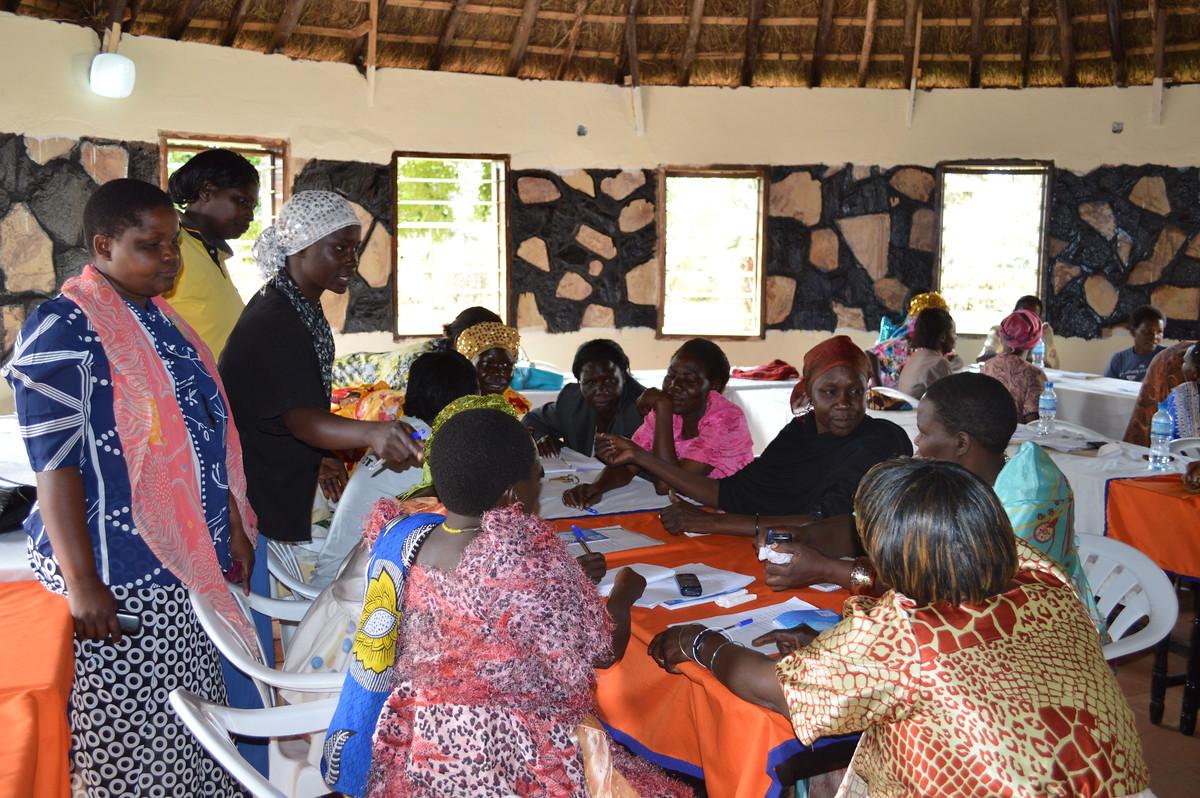 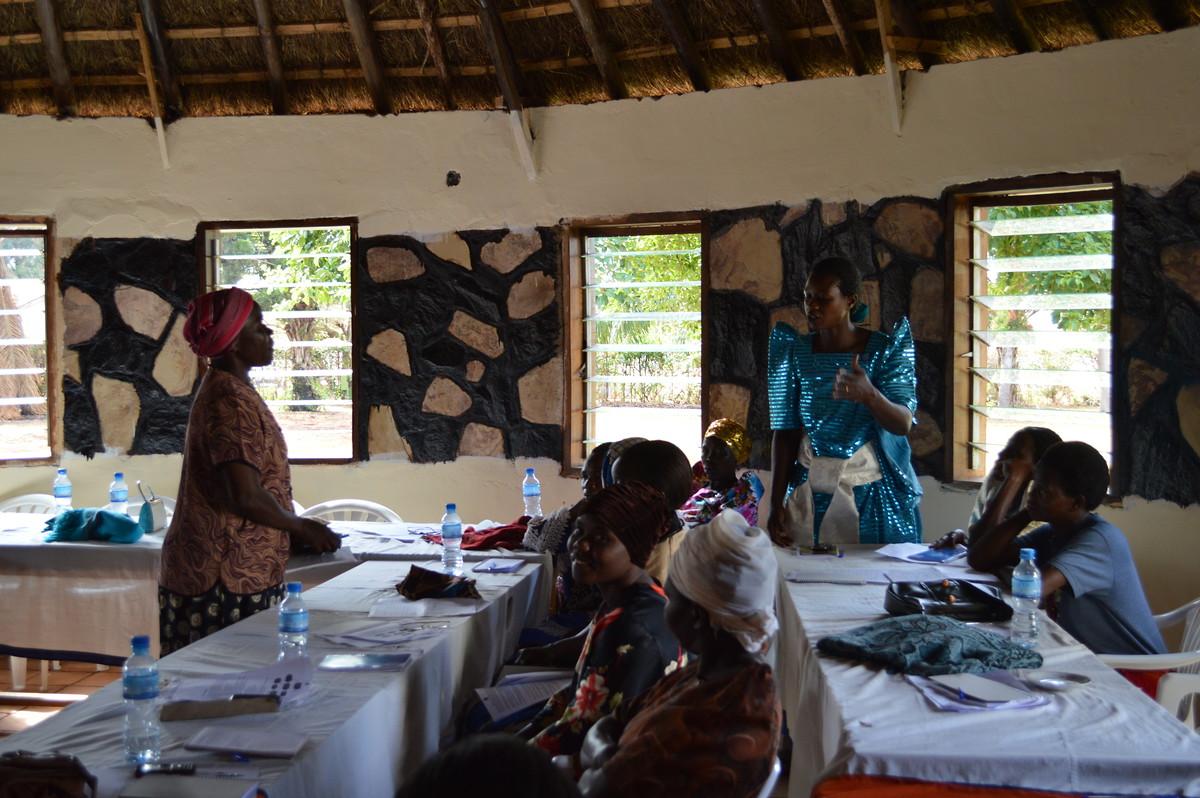 Participants from Kasogo Sub-County during preparations for a role play 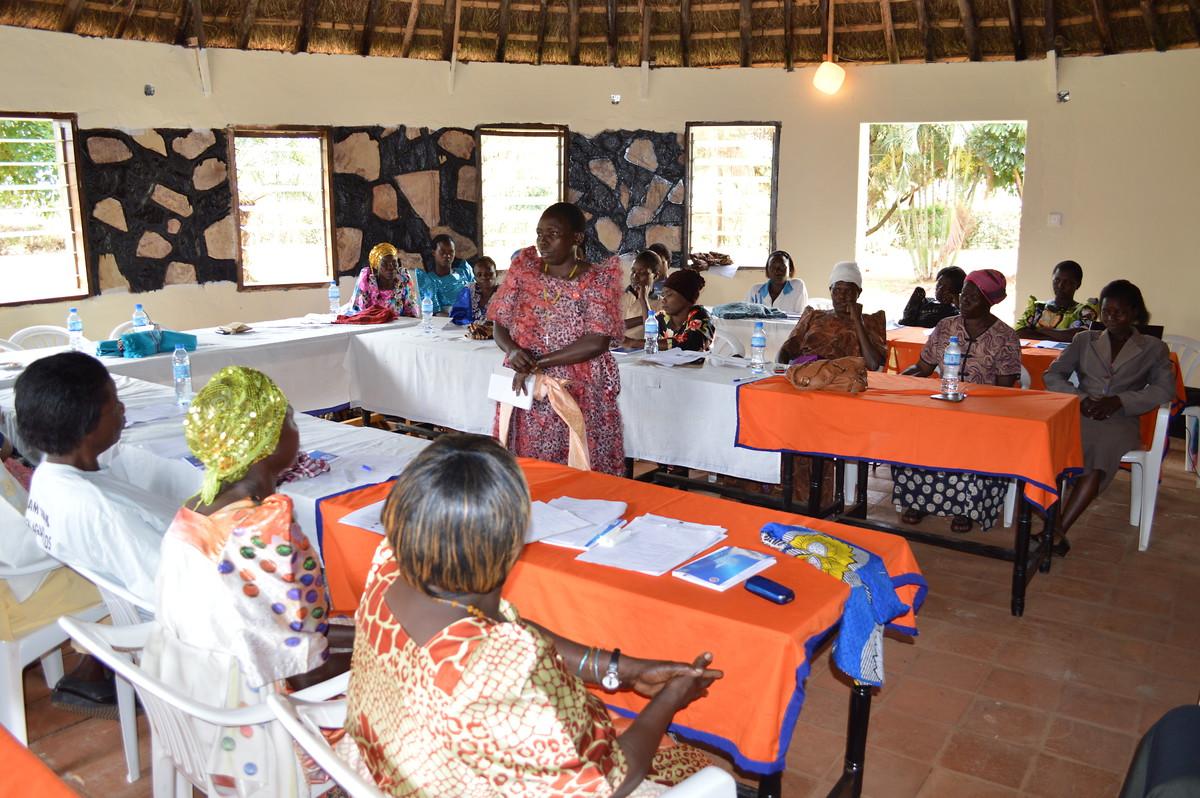 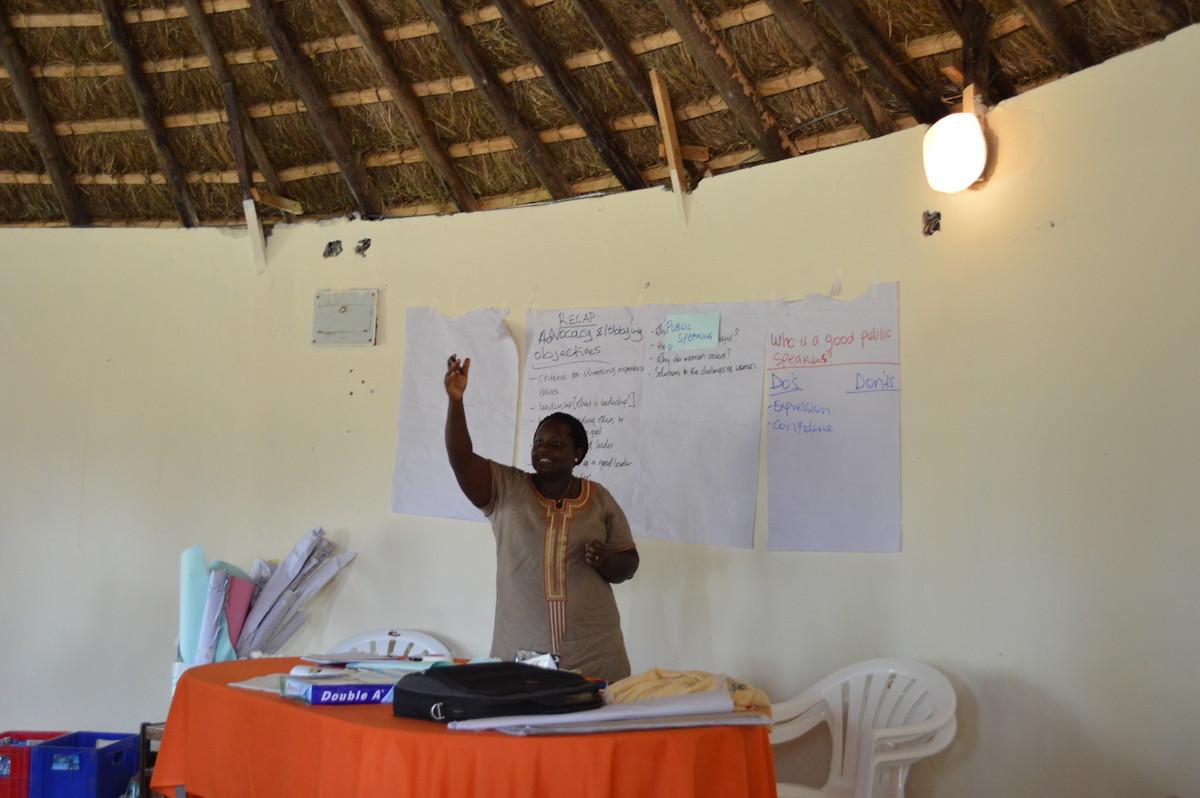 Bringing together 30 female sub-county and district councillors from the two sub-counties Butebo and Kasogo in Pallisa District, the workshop was organised in order to improve the standing of women councillors at the local government level by giving them the opportunity to strengthen their knowledge concerning the fulfilment of their roles and responsibilities as councillors and representatives of the people.

The workshop was organised against the background of Uganda's Affirmative Action policy, which guarantees protected access to political structures for special interest groups such as women, the youth, or persons with disabilities. Concerning specifically women in politics on the local government level, the 1995 constitution and the 1997 Local Government Act specified on the minimum numbers of women in local councils. The former requires for each sub-county to have a female representative in the district council whereas through the latter one-third of the seats in each local council are reserved for women.

The need for protected access to political participation for women arises from the fact that women constitute one of the social groups in Uganda that is gravely disadvantaged. The situation of women – especially but not only in the rural areas of Uganda – is up until today nowhere close to achieving equal treatment and chances to those of men. From their earliest childhood on women are often disadvantaged when it comes to education and access to political structures. They are frequently raised to care about their “traditional duties” in the family and household more than about political issues and are therefore socialised into roles that don't prepare them to be politically active.

Even though the above mentioned policies significantly increased the sheer numbers of female representatives on the local government level, and therefore theoretically gives women councillors the chance to champion the interests of women and gradually improve their situation, practically there are still considerable challenges related to the standing and situation of women in local councils.

Among those are for example a lack of knowledge of the formal rules and procedures in council, of the English language – which is the language in which all council minutes are written – and of the laws governing council sittings. This makes it easy to undermine the positions of women councillors, exclude them from the decision making process, or intimidate them during the sittings. Another hurdle many female representatives have difficulties in overcoming is that they are not used to speak in public, make a clear argument, and stand up for their interests and needs. Finally, women councillors are often perceived – by both male councillors and the public – to only be in council because of a quota and not because they are qualified to be there, or to take away seats from male councillors. This strongly impeaches their credibility and legitimacy and further aggravates the possibilities of cooperation within council and of representing the constituents' interests.

The workshop organised by ACFODE in cooperation with KAS was held in order to tackle some of those challenges and improve the standing of women councillors. Besides sessions on public speaking, the rules and procedures in council, the legal framework on local governments, and the use of caucuses, the participants also had the opportunity to network and exchange on encountered challenges, experiences, successes, and achievements. Especially accounts on how some of the participants managed to improve the situation concerning for example education or health in their villages were encouraging and inspiring for the other participants. The women councillors were invited to reflect on what qualities and skills made it possible for them to successfully champion the interests of the people they represent, and to pass on knowledge about how to best achieve their goals to participants who were less experienced. Furthermore the participants were given the possibility to recount situations they were struggling with at the moment of the workshop within their villages. Being encouraged to speak openly, some of the participants narrated about instances of domestic violence, of girls being raped, and of parents who were not interested in reporting the rapes of their daughters to the police – be it because of fear of disturbing the peace in the village, or because the possibility of marrying the daughter off to their rapists seemed to be the most simple solution. Even though it might take women councillors a long time and a lot of effort to sustainably improve the situation of women and girls in their sub-counties, the workshop seemed to encourage them to act in the interest of the people in their constituencies and to not shy away even from difficult cases as the ones being mentioned above. Furthermore other participants and the facilitators were able to give support and input and suggest practical solutions to the problems and ways forward even in difficult situations.

Through group work and role plays the female politicians were prepared to go back to their sub-counties and successfully use the newly acquired knowledge and skills to represent the interests of their constituents.

One of the aims of the workshop furthermore was to establish women caucuses in the two sub-counties, which were not split among party lines, but strictly had the purpose of communicating women's and girls' needs and interests and achieving gender equality for example in budgets and policy making at the local level. If used effectively, these caucuses have the potential of strengthening the standing of women councillors in local politics by creating a strong group of councillors who work together and back each other up.

It was the high level of interest and commitment on the side of the participants and the dedication and valuable knowledge on the side of the facilitators that made this workshop a success. Even though the capacity enhancement sessions in Pallisa might not seem to make a big difference when looking at the national level, they certainly improved the skills and strengthened the confidence of the participants – and through this eventually have the potential to positively impact on good governance, gender equality, and democracy on the local level.