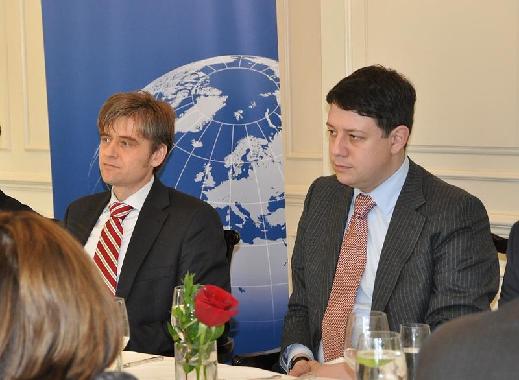 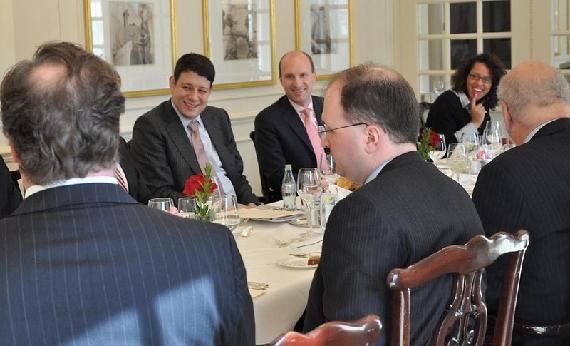 KAS office
Attendees at a roundtable discussion with Philipp Mißfelder MdB exchange views on the 2012 U.S. presdiential election and its impact on foreign policy.

German and American political insiders and policy experts assembled on February 15 to discuss the upcoming 2012 U.S. presidential election with Philipp Mißfelder, Member of the German Bundestag. In a roundtable discussion, ideas and opinions were candidly exchanged about strategy and the issues at the heart of the Republican primary, as well as the primary’s impact on November’s general election. Mr. Mißfelder is a member of the Foreign Affairs Committee and the Christian Democratic Union’s elected foreign policy spokesman

To start the discussion, Mr. Mißfelder shared his observations of how the U.S. election has been covered by the German media. He noted that the election itself receives a great deal of media coverage, but the complexities of the U.S. election system are not always explained well to the German public. The coverage, in his mind, sometimes fails to note the complexities of the primary process to select a party’s nominee and instead presents potential challengers as the inevitable next president.

Mr. Mißfelder also noted one of the stark differences between elections in Germany and the United States: negative campaigning. The tactic is now a regular part of American elections but is not as prevalent in Germany. Only recently has negative advertising been seen in Germany, and it is unclear whether it will become more prevalent in the future.

The discussion among the group began with observations about what may become a lengthy primary for the Republicans. Because of rule changes to the 2012 primary selection process, many states are awarding their delegates proportionally rather than in winner-take-all fashion. That change will lengthen the primary process, according to one of the experts at the discussion. There is some debate as to whether a lengthened primary would produce a stronger nominee or a bruised one for the general election. On the Democratic side, President Obama is unopposed in his party’s primary.

Mr. Mißfelder asked the conservative participants for their thoughts on the issue of Romney’s change in stance over the years on many key issues for Republican primary voters, such as health care reform, abortion rights and other social issues. The issue of Romney’s flip-flopping has created some questions as to whether the party will unite around Romney if he becomes the Republican nominee. One policy expert noted that Romney’s switch from pro-life to pro-choice and reversals on health care and other issues might prove problematic to voters who doubt his resolve. But in trying to shore up conservative support, Romney has described himself as “severely conservative,” leaving another expert to question if independent voters in a general election would decide a Romney Administration might be too conservative.

In addition to Romney’s problem with the perception that he has changed his stance on key issues, his vast personal wealth may create a disconnect between him and conservative blue-collar voters in some states. If that is the case, Rick Santorum stands likely to benefit as the current top challenger to Romney. One participant said that class division within the Republican Party will have a significant impact on the elections. Another drew comparisons to some Democratic political dynasties such as the Roosevelts and Kennedys, which were wealthy and influential, yet related more to middle-income Americans than Romney, who seems to relate more to wealthy voters.

The panel agreed that despite the difficulties Romney faces, his positive attribute as a candidate is his executive experience as governor of the democratic state of Massachusetts. Romney has proven that he can win elections with bi-partisanship support, and his private sector business experience gives him an edge on economic issues.

The economy, however, is a general election issue, not a primary election issue, noted one expert. He said that if the primary were about the economy, Romney would be the clear winner. Instead, the candidates are waging an ideological battle that could result in a brokered convention. A candidate like Ron Paul, who has loyal supporters but almost no chance of winning the nomination outright, could benefit in this scenario.

But even more telling than views on the economy is the polling question that will be most indicative of the general election results is, “Is the country headed in the right or wrong direction?” According to one participant, if the answer is yes, the incumbent will win the November election. If the answer is no, the Republican challenger will win.

Throughout the conversations, many candidates and issues were discussed, allowing many to see new perspectives or gain insight into how certain voter

blocs view the candidates. Many questions about the issues remain but will not be answered until well after the election.

While he was in Washington, Mr. Mißfelder also met with both Democratic and Republican Members of the House of Representatives to discuss energy issues and other topics being debated in Congress. Other one-on-one meetings during his visit to the United States touched on foreign policy issues and the U.S. relationship with Israel. The Konrad Adenauer Stiftung looks forward to examining these issues in addition to the election campaign debates during other programs in 2012.