The Transatlantic Agenda for 2015: A German Perspective

The Konrad Adenauer Foundation welcomed many distinguished guests from politics, economics, international organizations and think tanks to its New Year’s Reception at the Foundation’s headquarters in Washington, DC. During his speech Steffen Kampeter, the Parliamentary State Secretary at the Federal Ministry of Germany and a Member of the German Bundestag, highlighted the importance of the transatlantic cooperation and stressed the unique ties the transatlantic partners share.
January 24, 2015 Ordering Information 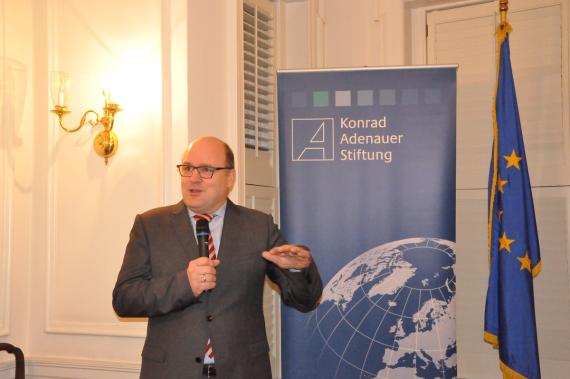 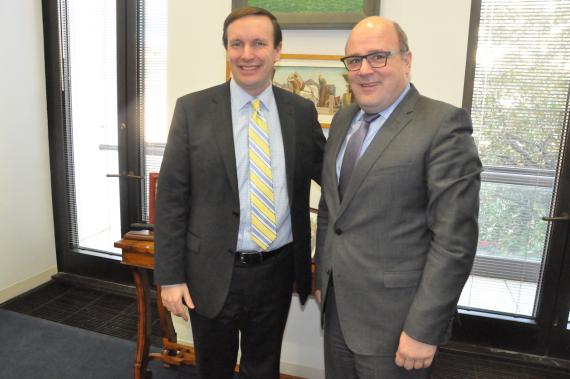 In his welcoming statement, Dr. Lars Hänsel addressed the future challenges on both sides of the Atlantic, but he also stressed the opportunity for an exceptional chance to deepen the transatlantic relationship, for example in the negotiations for a free trade region through TTIP.

In his speech, Federal State Secretary Kampeter emphasized the joint transatlantic efforts against terrorism and towards a free trade zone with TTIP. He also delved deeply into questions on foreign and security policy that affect the US and EU. He noted that the European Union is far more than just a monetary union; it is a political project with far reaching consequences. The transatlantic partnership therefore plays a key role in shaping a community of values. He expressed his deep gratitude for the KAS’ work in bridging the gap in these efforts.

Furthermore he discussed the US’ responsibility in the fight against terrorism and the commitment of the United States in a military coalition against the Islamic State. The crisis in Ukraine has shown that the EU is using NATO to pursue an independent foreign and security policy. This should be regarded as a European response to a European challenge. Therefore, he believes in a division of labor in foreign policy. Looking ahead to 2015 Kampeter spoke of a productive transatlantic partnership. He also points out that the transatlantic free trade agreement could be a "driver for growth" on both sides.

The visit of Kampeter in Washington was organized by the German Embassy in cooperation with the Konrad Adenauer Foundation. During his program Steffen Kampeter met among other interlocutors US Sen. Christopher Murphy (D-CT) and Rep. William Keating (D-MA), Rep. Todd Young (R-IN) and Rep. Erik Paulsen (R-MN). Steffen Kampeter also spoke at a private luncheon at CSIS on the topic “The Future of the Euro, Take Two: The View from Berlin”.

The Transatlantic Agenda for 2015: A German Perspective