"Conservative Parties Staying Competitive: The Challenges of the 21st Century"

With the financial crisis has come a change in the political party landscape in the USA – the Occupy Movement pressures the Democratic party to acknowledge socio-economic challenges while the Tea Party demands the Republican party to reorder its priorities regarding. The phenomena of the reshaping of the major parties is not limited to the United States as was illuminated in the roundtable discussion on “Conservative Parties Staying Competitive: The Challenges of the 21st Century.” The featured guest speaker was Dr. Jürgen Rüttgers, former Prime Minister of the state of North Rhine-Westphalia.
May 22, 2012 Ordering Information 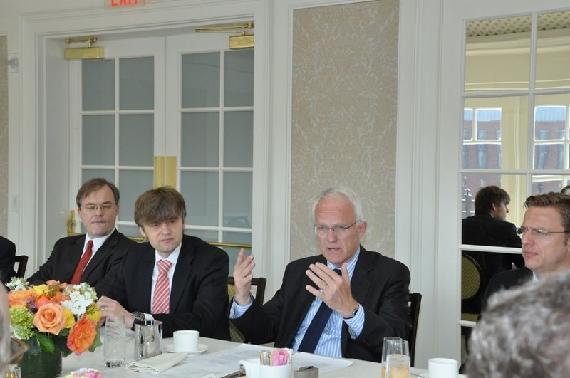 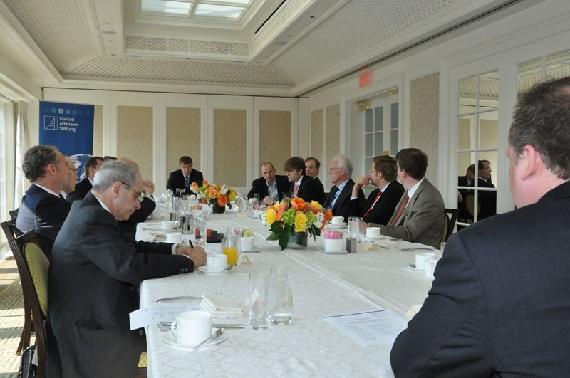 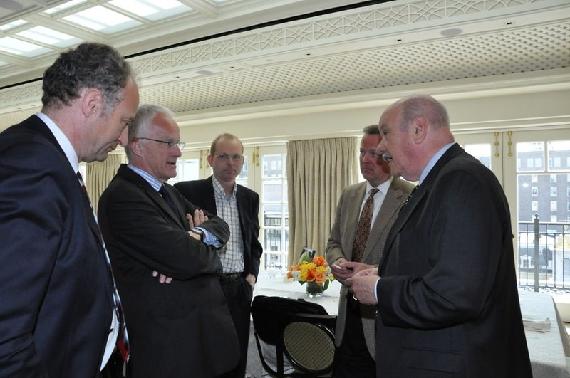 The theme of the roundtable discussion was to address the challenges of conservative parties adapting to social and economic change in our societies. Among the invited guests were influential political operatives and observers of the U.S. conservative party, The Grand Old Party. The guest speaker was Dr. Jürgen Rüttgers, who is one of the last “Kohlianers” in the Christian Democratic Union who has helped shape the politics of the CDU throughout his 37 years as a politician. In the past, the major German political parties played a distinct role as a Volkspartei or “catch-all party”, and were able to muster large percentages of popular vote and thereby govern in majority or coalition. Recent years have shown that "catch-all parties" are increasingly under pressure.

According to Rüttgers, he believes there is an increasing disconnect between traditional party policy platforms and what many voters believe relevant in their lives. The question arises as to how “catch-all parties” can maintain relevance to a sufficient number of voters to govern. Our societies, he said, are changing, yet our conservative parties are too much staying the same and not adapting enough to changing times.

Rüttgers argued that the disconnect has led to the decline of the German “catch-all parties” (and rise of smaller parties – The Greens, Die Linken and The Pirates). The cause for this can be explained through a number of recent developments: For one, internal party discourse over policy formation does not reach the public enough. Voters, as a result, feel often times disenfranchised. In Germany the result is that the voters vote for up-start parties. In America they protest.

Another reason for the disconnect, in Rüttgers’ opinion, is that the new media (e.g., twitter, emails, and bloggers) discusses politics without directly engaging with the parties or party leaders. Today’s new media, as preferred by many of the younger voters, is created independently from parties and at times has no relevance to the inner workings of the parties.

Finally, it has been Rüttgers’ observation that scandals of politicians and not their long-term commitment to serving the public have come to shape the image of the parties.

For the conservative parties to maintain its relevance in policy formation, Rüttgers believes that they must reconnect with the voter base. How to overcome this disconnect became the focus of the roundtable discussion. Rüttgers set the tone of the debate by emphasizing that conservative parties need a recognizable brand. Without such, voters will look elsewhere for answers to their questions. Conservative parties must be able to address the concerns to modern day challenges, including issues such as climate change, demographic changes, knowledge-based societies and new political orders.

When it comes to defining the core values of a conservative party, one of the discussants pointed out that the Christian Democratic Union distinguishes itself from the Republican or Tory party in that it reflects deeply rooted Christian values in terms of social justice. Conservative U.S. political leaders do not question the need for social programs but are more concerned with how best to utilize tax payers’ money. It was important for the American guest to clarify that Democrats do not hold a monopoly on being compassionate.

In general, the concept social justice has not dominated US political debates as it has in Germany. Instead what is often implied with social justice is equal opportunity and the classical American dream of social upward mobility. The American discussant pointed out that the two societies differ in that the American society has up until recently been upwardly mobile. Now a more recent phenomena is that many middle and upper-middle class families enjoy less class security. In Germany social mobility in general has always been more rigid facing less political and public scrutiny.

Another comment on the lack of parties’ abilities to address modern challenges was made by a senior policy expert at a think tank. He confirmed the general belief that parties on both sides of the political spectrum are ill-equipped for modern day problems. The new media has become the new way of aggregating and collecting public interests, making public involvement possible but at the same time not offering deliverables. The feeling of disenchantment is a global problem that parties need to address.

In the course of the discussion, it became clear that both the German and American conservative parties have similar challenges in how to best address modern problems. Even so, the United States political two-party system vastly differs from the multi-party parliamentary system in Germany. The new developments in the U.S. political landscape have to be accommodated within the two major parties. Whereas in Germany, new smaller parties have formed which has lead to a fragmentation of the party system and less stable multi-coalition governments. No simple solutions were presented and Rüttgers made clear that modern “catch-all parties” can only survive if they can attract the vote of the youth.