A Policy Paper by Konrad-Adenauer-Stiftung and Maison du Futur as an outcome of the roundtable held on the 3rd of December 2021.
11 avril 2022 Informations de commande

Lebanon is undergoing a stifling economic crisis that has had repercussions on all aspects of life amid a faltering political recession, going from presidential, to parliamentary and governmental vacuums, to political settlements and quota governments, the last of which was the formation of a government that was soon obstructed from within, which exposed its political structure that was based on partisan and sectarian divisions. The political recession left a devastating impact on the economic and the financial levels. The Lebanese lira went through an unprecedented collapse against the dollar, which has had repercussions on livelihoods amongst all social classes in Lebanon. Since the October 17 revolution in 2019, the Lebanese people have been standing against the political class that has been ruling the country over the past years. In addition to this stifling scene, the deterioration of the relations with the Gulf states – that is unusual within Lebanon’s diplomatic relations – has transformed the nation of openness and pluralism to an isolated zone in its surroundings.

Facing this grim reality, “Maison du Futur” organized a conference in partnership with “Konrad-Adenauer-Stiftung”, in which elites from the civil society and its cadres participated, some of whom have worked in state administrations and been in decision-making positions, specifically on the financial level. This gave the conference enriching dual scientific and practical dimensions. If the scientific dimension of the forums is the result of a higher academic education and specialized competencies, their practical dimension comes from personal experiences and significant expertise they gained in the field of financial policies. This allows them to demonstrate the true reality of the public affairs in light of political, economic and financial challenges as well as the performance of former mandates and successive governments, and Central Bank policies over the past years, which made the state of Lebanon a non-friendly environment for a good governance (first part). Throughout the three discussion sessions, speakers broke down the contract signed between the Lebanese state and the global firm Alvarez and Marsal (A&M) for the purpose of a forensic audit of the Central Bank of Lebanon’s accounts, which was merely a facade to display that the Lebanese state is serious about putting an end to the waste and corruption within its institutions and defining responsibilities (second part). 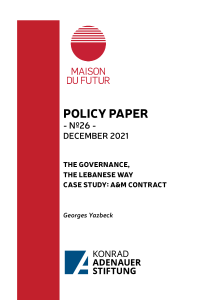