'Periscope' is the Occasional Analysis Paper/Brief series of the Konrad Adenauer Foundation's Regional Programme Australia and the Pacific. Just like the real-world sighting instrument, Periscope is meant as a lens to broaden our insights - taking in views from different angles. This way, it seeks to bring together perspectives from Germany, Europe, Australia, New Zealand and the Pacific region to augment our understanding of contemporary issues and help address the pressing problems of our time. The Periscope Series covers topics from the area of foreign and security policy, cybersecurity, terrorism/counter-terrorism, energy policy, rule of law, socio-economic matters and development policy. It comprises both longer Analysis Papers– in the form of single-author (and co-authored) contributions or edited volumes with multiple authors - and shorter Analysis Briefs.
31. März 2021 Bestellinformationen

New Zealand has commenced its 2021 hosting of APEC. A decision was made early that all meetings would be held virtually, breaking with tradition. Though inevitable, this decision was not popular amongst the APEC community, where diplomats and trade negotiators have traditionally relied on face-to-face meetings for their business. Early experience from the New Zealand year is that remote meetings have proved a very effective way to transmit information, but it has been much harder to negotiate positions at a distance.

APEC is a unique international organisation. It is composed of economies not countries (including three economies listed by APEC convention as China, Hong Kong SAR, and Chinese Taipei). It is a voluntary arrangement, not ratified by member economies, and not subject to national law, so its declarations and programmes are not legally binding on members. Each member effectively holds a veto, and hence APEC only moves forward with broad consensus. As such, it cannot force change in contentious areas. But it has been successful in the past at sourcing new ideas about trade and development policies in the Asia-Pacific context, promoting best practice and harmonisation among its members, and integrating economic flows.

Alan is also the Chair of the Infrastructure Commission, Chair of the cross-university Centres for Asia-Pacific Excellence, and Chair of the New Zealand Portrait Gallery. He is NZ Governor of the Economic Research Institute for ASEAN and East Asia.

Between 2002 and 2012 Alan was the Governor of the Reserve Bank of New Zealand. During this time, he was responsible for monetary policy and bank regulations, helping steer New Zealand through the Global Financial Crisis. After two five-year terms as Governor, Alan left the Reserve Bank to become the Executive Director of the APEC Secretariat based in Singapore. He was APEC’s first Executive Director to serve two terms (2012 to 2018).

Alan wrote a best-selling account of the GFC called Crisis: One Central Bank Governor and the Global Financial Collapse.  He has published several novels: The Rough Mechanical and The Code-cracker and the Tai Chi Dancer. He has also written a biography of famous economist Bill Phillips, and a popular economics book Economists at War.

In 2012, Alan was honoured as a Companion of the New Zealand Order of Merit. He is a Fellow of the NZ Royal Society. Alan holds honorary doctorate degrees from the University of Auckland and Massey University. 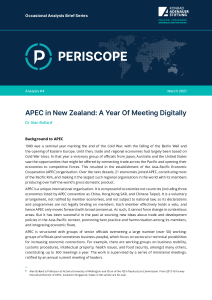