'Periscope' is the Occasional Analysis Paper/Brief series of the Konrad Adenauer Foundation's Regional Programme Australia and the Pacific. Just like the real-world sighting instrument, Periscope is meant as a lens to broaden our insights - taking in views from different angles. This way, it seeks to bring together perspectives from Germany, Europe, Australia, New Zealand and the Pacific region to augment our understanding of contemporary issues and help address the pressing problems of our time. The Periscope Series covers topics from the area of foreign and security policy, cybersecurity, terrorism/counter-terrorism, energy policy, rule of law, socio-economic matters and development policy. It comprises both longer Analysis Papers– in the form of single-author (and co-authored) contributions or edited volumes with multiple authors - and shorter Analysis Briefs.
10. Juni 2021 Bestellinformationen

”The empire strikes back“ - this could be the title not only of a Star Wars movie but also of the recent movements of legislators across the globe, in particular the European Union, concerning activities and business models of big technology enterprises such as the famous GAFA (Google - Apple - Facebook - Amazon). Regulators are responding to traditional industries complaining about being exploited or discriminated against by, and growing monopoly-like power of, big technology companies. Complaints relate to the exploitation and use of third-party created content such as news, while simultaneously refusing access to important data, thus constraining the creation of new business models. The complaints also touch on crucial issues for democracies such as open discussion of political issues or spreading of fake news, without incurring liability or denying responsibility for acting as gatekeepers for the services in question.

​​​​​​​
Prof Dr Gerald Spindler, born in 1960, studied Law and Economics in Frankfurt am Main, Hagen, Geneva and Lausanne. He is a fully tenured Professor of Civil Law, Commercial and Economic Law, Comparative Law, and Multimedia and Telecommunication Law at the University of Goettingen/Germany, where he is mainly occupied with legal issues regarding E-Commerce, ie, Internet and Telecommunication Law.
He was elected as a fully tenured Member of the German Academy of Sciences, Goettingen, in 2004.
Apart from teaching, he has published various books (more than 20), commentaries (annotated codes), and more than 400 papers in law reviews as well as expert legal opinions. Prof Spindler was elected as general rapporteur for the bi-annual German Law Conference regarding
privacy and personality rights on the internet (2012). He is the editor of two of the most renowned German law reviews covering the whole area of cyberspace law and telecommunication law. Further, he is the co-editor of international journals on copyright law, and founder and editor of JIPITEC, an open access-based journal for intellectual property rights and e-commerce which has won awards by research foundations.
The EU commissioned him to review the E-Commerce Directive in 2007 (DG Internal Market); he is currently an expert for data economy for the single market (2017). He was also recently (June 2018) appointed as High Level Expert for legal issues of New Technologies, in particular artificial intelligency and liability. Regarding Data Protection, Prof Dr Spindler was involved in the negotiations of the GDPR as an external consultant for the German government. 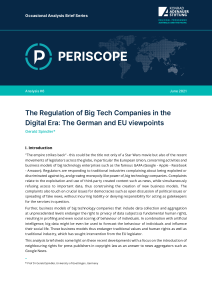