Framework, Benefits and Costs of Renewable Energy in the Western Balkans

Experts from the energy sector, politicians and civil servants, and representatives of numerous non-governmental organizations took part in a Regional Renewable Energy Symposium on April 25th in Sarajevo, Bosnia and Herzegovina. The Konrad-Adenauer-Stiftung’s Sarajevo office enjoyed the support and partnership of the Joint Committee on Economic Reforms and Development of the Parliamentary Assembly of Bosnia and Herzegovina in the symposium’s implementation.
18. Mai 2012 Bestellinformationen

The organizers sought to connect key actors from the Western Balkans and the European Union (EU) who, together, will be committed to fulfilling the EU’s standards and securing the region’s energy future. The symposium included a Networking Forum, a Renewable Energy Fair and a conference in the Blue Hall of the Parliamentary Assembly of Bosnia and Herzegovina. A large and diverse number of participants, who travelled from both of Bosnia and Herzegovina’s entities, Brčko District and abroad, attended the symposium. The guests were high ranking representatives from the parliaments, ministries, economic chambers, business, as well as from the universities and the NGO sector.

Upon opening the conference on April 25th, the organizers noted that, “the motor of development for any society is energy.” However, highly industrialized countries have traditionally relied on finite energy sources for their economic development. The same is true of the former Yugoslavia. Today, the Western Balkans is at a crossroads. The countries of the region must decide between a future aligned with the EU’s standards and committed to the development of renewable energies, or one in which they risk environmental degradation and the rising cost of fossil fuels.

For symposium participants, this vital decision is clear. Throughout the course of the conference, speakers pointed out the obvious benefits of developing renewable energies. These include the creation of an environmentally friendly, sustainable energy supply, economic growth and a catalytic force for science, research and new technologies.

In the case of Bosnia and Herzegovina, securing the country’s energy future will require political, legal, financial and technological adjustments. Current barriers to the introduction of renewable energy in the region do not constitute a “mission impossible.” Rather, as the Ambassador of the Federal Republic of Germany to Bosnia and Herzegovina, Ms. Ulrike Maria Knotz, explained, “the time has come for new strategies” that will allow experts and entrepreneurs across the region to work together.

Please read the complete event contribution by clicking on the PDF-symbol. 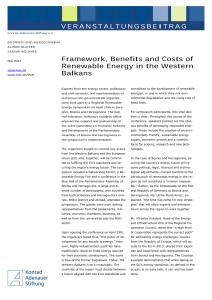 Framework, Benefits and Costs of Renewable Energy in the Western Balkans (Pdf)
Herunterladen

Framework, Benefits and Costs of Renewable Energy in the Western Balkans