The Diginar began with an opening session welcoming all partners, distinguished speakers and participant. A brief overview of the quadrilateral dialogues series was given by Swati Ganeshan from TERI. The quadrilateral dialogues series has been a joint effort of TERI-KAS-NMF-FICCI on Blue economy (BE) for India and the role of three pillars- economy, security and sustainable development in its framework.
28. Oktober 2020 Bestellinformationen

Mr. Peter Rimmele - Resident Representative, Konrad Adenauer Stiftung India office Sustainability is a term that covers the broadest of possible issues including development, environment, resource management, diplomacy, the possibilities are limitless and each and every one of them constitute a valid societal challenges we need to face. So ensuring the sustainability of oceans touches on quite a few rather diverse topics and that is why we have diversity of partners covering different aspects of the blue economy framework.

He highlighted that everything is connected, the ecological wellbeing of a maritime spaces directly effects the economical prospect of it sea fare relations which in turn has repercussions for their prosperity and political stability. If you look into details of what our sea fare relations are of Europe, you would be surprised that even Switzerland has a high sea fleet but you don’t know of Switzerland being connected to the ocean.

It’s a land lock country but it has a running high sea fleet like Austria. So ocean has connectivity to everyone even if one doesn’t think of them in the first moment. Even European are far removed from the Indo-pacific spatially we feel the ripples or rather shock waves that will indirectly occurs when the scale are tipped one day or other in the indo-pacific and this is why the German government has formulated recently its new indo-pacific guidelines highlighting the importance of the region for our country and for Europe as a whole. Let me look a little bit at the sustainable economy and security part. So ninety percent (90%) roughly of global trade is transported via sea. 35% of that passes through the strait of Malacca alone. The wealth that is generated in and along the Indian and Pacific Oceans ensure that the eyes of both the trading nations are firmly set on the indo-pacific.

The political and economic significance of these vast space cannot be underestimated or even under stated and as we all know wealth invites conflict and destruction such as piracy off the Somalian Coast. Fighting this with blunt force has hardly been proved to be a sustainable solution. There are systemic reasons below the surface that need to be addressed and they have lot to do with unsustainable arrangements in the Indo-pacific but elsewhere in the world too. Free and fair access of and for all must be guaranteed in multilateral and open framework where each voice is heard and each nation has a chance of attaining prosperity and success. If the spoils of the sea are being denied to indopacific rim we practically invite criminal behavior and if we turn away for a moment from the trade that passes through the Indo-pacific to the wealth that is contained within we see a similar pattern.

The Natural maritime resource of the indo-pacific are being depleted at an alarming speed and pace. Here too we need to just not only fight the symptoms but look at the underline reasons. The region is in focus and the quest for control over it is bound to happen and indeed with China growing influence and its increasing movement in the region is a major concern. This cannot be allowed to happen. Not just because we as Europeans and as India might not agree with some of the geostrategic aims and ideas brought forward by Beijing but rather because of notion of any unilateral power in control of Indopacific is a recipe for multidimensional global catastrophe which needs to be avoided.

In order to continue reading the outcome report, kindly refer to the pdf attached on this website. 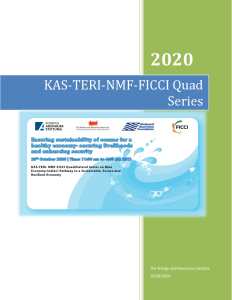