Prof. Dieter spoke on four broad areas:
a) Origin and Benefits of Free Trade
b) Drawbacks of Free Trade
c) How China upsets the apple cart of World Trade
d) The way forward.

The Origin of Free Trade:

o He broke Mao Zedong's past and permitted private enterprise to contribute to economic activity
o He opened China for international trade. Till 1979, China's rulers had a perception of international trade that differed sharply from other nations.

The Plight of WTO 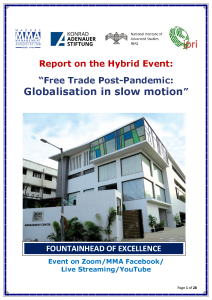