The National Maritime Foundation conducted the inaugural NMF-KAS-TERI-FICCI online diginar on the theme Holistic Maritime Security in The Indian Ocean Region: Pursuing a Sustainable and Secure Blue Economy on 21 Sep 2020. The diginar was envisaged to generate a corpus of diverse ideas through free-flowing discussions on contemporary maritime issues facing India. The diginar succeeded in this endeavour by eliciting valuable inputs from multiple stakeholders ranging from security, diplomacy, and academia. The inclusion of such a varied mix of ideas and suggestions will strengthen newly forged relationships and linkages with other collaborators.
21. September 2020 Bestellinformationen

(a) Blue Economy should be viewed not merely as one sector of the national economy but as a new perspective on the entire national economy. The oceans constitute the font of all life on Earth, therefore, any further degradation of the environment and the marine ecology and biodiversity, would be irreversible and unaffordable. In this context, it is crucial that any and all marine resources sought to be harvested for economic gain should be utilised in a sustainable manner.

(b) Blue Economy is a significant facet of India’s larger economic and strategic architecture including its commitment to achieve the UN’s Sustainable Development Goals (SDGs). A successful transition to a secure and sustainable Blue Economy is critically reliant on ensuring holistic maritime security which describes freedom from threats arising either ‘in’ or ‘from’ or ‘through’ the sea.

(c) The Ocean Health Index produced annually by Conservation International is one of the widely acknowledged frameworks to assess the performance of individual countries in maintaining the health of their oceanic spaces. India’s ranking in the index has been declining in recent years. In 2019, India ranked a dismal 191 out of 221 countries. Clearly, India must make rapid advances to protect and preserve our oceanic expanse and move up in the rankings to more accurately reflect our ambitions and efforts to position ourselves as a maritime power.

(d) Stakeholders must proactively avoid the Blue Enterprise rhetoric. Targets should be established considering capabilities, political objectivity, and the ability to enforce pervasive change. Literature released by various players alludes to ‘noble intentions’ but often falls short in terms of implementation. Moreover, domestic initiatives to create sustainable practices within one region should preclude attempts to farm out unsustainable practices, which might negate any gains on a more global level. In this regard, regional perspectives of SDGs should be considered while orienting national policies.

(e) Illegal, Unregulated and Unreported (IUU) fishing is a critical cause of concern that is not limited to one particular region. This is due to its ubiquitously negative implications on overall food security and the socio-economic conditions of all stakeholders. Robust ‘Maritime Domain Awareness’ (MDA) is the key to tackling the challenge of IUU fishing and other allied challenges that adversely impact the sovereignty of nations.

(f) The resilience of the major coastal agglomerations such as major and mega cities located on the coast, along with collaborative studies on the quantification of the impacts of climate change upon naval and coast guard infrastructure in major naval bases, needs to be undertaken urgently and comprehensively, so as to formulate effective strategies to counter threats from rising sealevels. Any threat to the core infrastructure of major State-players would adversely affect the discharge of their duties as first responders to threats from the sea. Offsetting such threats could develop into a ‘lessons-learned’ narrative that could then have a trickle-down effect on other coastal establishments that may have to face these threats in the future.

(g) The quantification of loss of land due to sea-level rise and the implications thereof constitute a crucial exercise whose undertaking brooks no further delay. The partial or complete submergence of island nations in the near future will have a ripple effect upon other coastal nations, due to inevitable displacements and possibly large-scale migration, leading to significant increases in the number of ‘boat people’. Assessing possible socio-geographical changes and developing contingencies to alleviate imminent distress must be complemented by studies on the possible resettlement of displaced populations.

(h) Studies on natural habitats and natural countermeasures against seawater ingress have crosscutting implications upon nearly all constituent forms of holistic maritime security. In this context, mangroves deserve very intensive correlation. Their ability to withstand severe flooding not only improves coastal resilience but also precludes financial outlays in terms of the restoration of infrastructure in the aftermath of storms, storm-surges, severe coastal erosion, etc. Their several and uniformly beneficial applications to urban coastal-landscapes require a series of intensive and in-depth research-studies.

(i) A deliberate and sustained effort to establish correlations between studies — especially multi-disciplinary ones — is likely to not only reveal threats whose interlinkages were hitherto unrecognised, but also offer solutions to these very threats by the identification of adaptation and mitigation measures. All in all, the criticality of thorough and frequently updated surveys, reports and analyses, is of the highest order.

(j) The utilisation of Ocean Renewable Energy Resources (ORER) as an alternative to fossil fuels, in order to cut down carbon emissions and facilitate India’s Blue Economy, is necessary to diversify the renewable energy options.

(l) India needs to play a leading role in supporting the ocean-based sustainable economic growth of the region as a whole, thereby contributing to the holistic maritime security of the Indian Ocean Region. India’s diplomatic and military outreach to address structural deficiencies within the broader region should be pursued by leveraging its superior ‘capability’ and it should be guided by a comprehensive understanding of the environmental challenges faced by economically weaker states in the region. 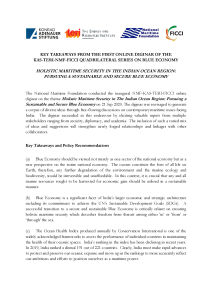